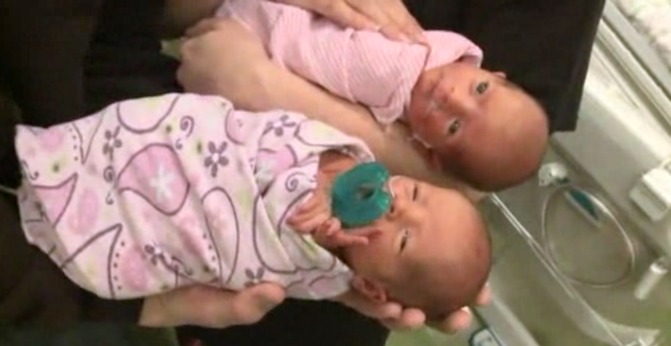 When Shelby Magnani went to a walk-in clinic with stomach pains, she was completely unprepared for the great news that was coming. Not only was she six months pregnant and didn’t know it, but she was pregnant with a rare set of twins. She and her fiancé James Croskey were shocked, excited, and scared.

Their baby girls are what’s known as monoamniotic twins, meaning that they share both a placenta and an amniotic sac. As reported by Fox News in St. Louis, Dr. Jennifer Krupp of Perinatal Center in Iowa, says that less than one percent of all twins are monoamniotic (mono-mono) and those that are have only a 50/50 chance at survival due to complications including cord entanglement. The risk of one or both twins dying is significant according to Dr. Krupp.

Normally, women who are pregnant with mono-mono twins are admitted to the hospital around 24 weeks gestation so they can be monitored and the babies can be checked several times a day to ensure both are safe and doing well. Magnani had no prenatal care at all until she went to the walk-in clinic.

“I’m still trying to process. It’s crazy how high risk mono-mono twins can be, and how good they’re doing now, it’s really a blessing,” Magnani told Fox. “They’re both just little miracles, it could have been so many things that went wrong that didn’t.”

The girls, named Ava and Anna, were born via C-section and both are doing well. Though they will spend a few weeks in the Neonatal Intensive Care Unit for observation, doctors expect them to be home soon.