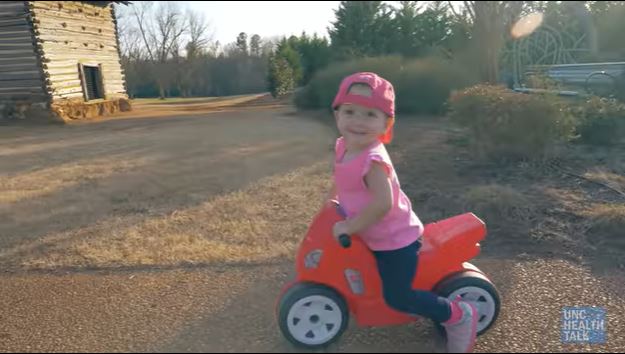 Shane and Jennifer Lee know the fear, grief, and hope that come with receiving a diagnosis of spinal muscular atrophy (SMA) for their child — three times over. Their first daughter Jocelyn died from SMA type 1 when she was just four and a half years old. Their son Nathan is six years old and uses a wheelchair to get around. Their two-year-old daughter Kirra, however, will likely never suffer the full scope of the disease. They have two other children who do not have the condition.

SMA is a genetic condition that, in its most severe form, is deadly even before birth. It is genetically inherited — each parent must pass on a mutated gene — that causes the loss of motor neurons which control the movement of voluntary muscles. There are four levels of severity from type 1 to type 4 though at least one study points to the distinguishment of a type 0 – or prenatal onset – which is noticeable in babies before birth.

In the womb, SMA in its most severe form is detectable by a lack of fetal movement, problems with the baby’s joints, and respiratory failure. After birth, SMA type 1 is diagnosed within a few months due to the newborn’s “floppy” limbs and weak trunk as well as difficulties eating and swallowing, holding up his/her head and even breathing. A child’s symptoms with type 1 will progress quickly and children can die before their second birthday, never having been able to sit up. Type 2 appears typically after seven months but before 18. This type mostly affects the legs and these children usually won’t be able to stand up. Life expectancy can be from early childhood to adulthood. Types 3 and 4 are less severe and life expectancy is close to normal.

The Lees’ daughter, two-year-old Kirra, was born in the time of Spinraza, a new medication that is changing and saving the lives of people with SMA – if they can access it. Early studies proved that the drug is beneficial even reversing some of the effects of the disease in patients. Unethically, not all children in the study were put on the medication. Some were placed on a placebo and suffered the consequences. When doctors are already fully aware of how a disease will quickly debilitate and kill a small child, not one of them should have been denied the medication that provided such hope.

Kirra was diagnosed in the womb and her parents immediately reached out to UNC Healthcare. Spinraza was still awaiting FDA approval and earned it just three months before Kirra’s birth. She began to receive the medication — an injection in the back — when she was just 11 days old. She hasn’t shown any symptoms of the disease.

“Clearly we treated her before the weakness began,” UNC Children’s Hospital pediatric neurologist Dr. Zheng (Jane) Fan told UNC. “She is a normal baby. She walked at the age of 11 months and she was running at the age of 15 months, and this is absolutely amazing.”

Her brother Nathan had already lived four years without the medication and has felt the effects, but Spinraza has helped stop the progression of SMA in his body and even helped him improve.

“He was able to stop further progression,” Dr. Fan explained. “He was able to regain some finger movement after the treatment and ankle movement, but the amazing thing is he was able to gain weight.”

Melissa Marotta‘s son C.J. has SMA type 3. It took her months to get Spinraza for him as he began to lose the ability to stand up for more than a few seconds at a time. She contacted the hospital board at Columbia University Medical Cente/New York-Presbyterian Morgan Stanely Children’s Hospital every day for months until he was finally given his first dose. Spinraza can be complicated to get because it is so expensive. $750,000 for the first year when more doses are needed, and $375,000 each year after that. SMA affects up to an estimated 25,000 Americans. As studies continue to show the remarkable benefits of Spinraza, it becomes easier for families to access.

Amanda and Jeremy Camp’s son Asher has SMA type 1 and his parents were able to get him into the early clinical trials just a month after his diagnosis at six months old. He is growing up stronger than anyone would have ever thought possible. Without Spinraza, Asher would have died after losing his ability to move. Now, he is walking without assistance. His parents work hard fundraising for SMA research and pushing states to enact newborn screening so that children get the help they need as quickly as possible.

With such a miracle occurring in the SMA community, there is a big push to ensure SMA is tested for during newborn screening. No child with the condition should go undetected as so many have in the past. One in 40 Americans is a carrier of the mutated gene, and many don’t know it. SMA was officially added to the Recommended Uniform Screening Panel in 2018, but less than half of US states actually check for it or are in the process of adding it.

Despite the progress in treatment and the recommendation that every child be tested for SMA at birth, some doctors and even families who have lost children are pushing to prevent the disease altogether. But the only way that can currently happen is by killing the people who have it through either abortion or preimplantation genetic diagnosis or PGD. SMA can be tested for during pregnancy and children could then be recommended for abortion. In addition, many doctors will push for in-vitro fertilization with the use of PGD. Couples can take a simple blood test to determine if they are carriers of SMA. If they both are, they can use IVF to create embryos and then PGD to destroy any who test positive for SMA. It’s the weeding out of those whom eugenicists would deem “unfit.” It’s deciding for someone else that they are better off dead than alive with SMA — even with the major breakthrough in treatments.

Some people think death by abortion is better than living a life in which you must receive spinal injections throughout your entire life until a cure is found. Thankfully for so many children including Kirra and Nathan, their parents know their children are more than their diagnosis. The Lees named their daughter Kirra Faith because Kirra means “woman of light” and because they know that Kirra wouldn’t be here if it weren’t for their faith in God.