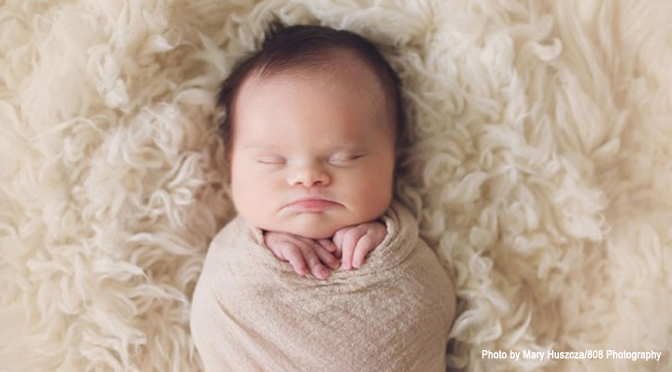 Diagnosed with both Down syndrome and fatal brain tumor while still in the womb, Abigail Jones was not expected to live long after her birth in August. However, her parents rejected abortion, and decided that no matter what, they would love and care for their daughter for as long as they had her. Her mother Erika Jones wrote in a blog post:

Leaning on the grace and perfection of our God, we knew little Abby’s life had a purpose, no matter how long or short it was. We pray continually for her healing, but our faith in God was/is not based on Abigail’s healing.

After Abigail was born in Jacksonville, Florida, she was doing so well that her parents and big sister Audrey were able to take her home. They had pediatric hospice on hand to help, and while the family enjoyed their time with Abigail, they were also planning her funeral.

“We would spend all day just looking at her in amazement, but also with the gut-wrenching pain that it could be the last day you had with her,” her father Stephen Jones told ABC.

Only Abigail wasn’t dying as the doctors had expected.

“She ate, she gained weight, and she looked great,” said Erika Jones. “She was thriving; she was certainly not in any way, shape or form dying.”

The couple decided to get a second opinion, and turned to doctors at Boston Children’s Hospital.

“There are sometimes tumors that are not malignant that can look malignant,” Dr. Alan Cohen, neurosurgeon-in-chief and Children’s Hospital told ABC. “And we thought there wasn’t enough evidence to give her a death sentence, so we said, ‘Why don’t you come up here and we’ll take a look at this thing and maybe we can take it out.’”

Cohen discovered that Abigail’s brain tumor wasn’t cancerous after all.  Surgery was scheduled, and doctors were able to successfully remove the tumor, giving Abigail the future her parents were praying for. “We are elated beyond words,” they wrote on Facebook. “God’s plan for Abigail’s life was not meant to end in hospice. I have witnessed a true miracle and we are so thankful that Abigail’s story will continue on.”

The Joneses are urging anyone who receives a medical diagnosis to seek a second opinion. Abigail’s doctors in Jacksonville believed Abigail had one of three kinds of aggressive, fatal cancer.

“This was their best clinical advice. It was just incorrect,” Erika Jones wrote on Facebook. “Our neurosurgeon in Boston told us he could absolutely understand why our doctors would tell us that – it’s what it looked like. Huge tumor, little baby. 99% of the cases, very very bad. Abigail was just not a typical case. The type of tumor he thinks she had (definitive pathology is not back yet) is extremely rare and very much mimicks a malignant, horrible cancer monster. […] a second opinion is always a good idea.”

For now, Abigail remains in Boston for a few more days before heading home to be reunited with her big sister, and begin her new happy, healthy start in life.