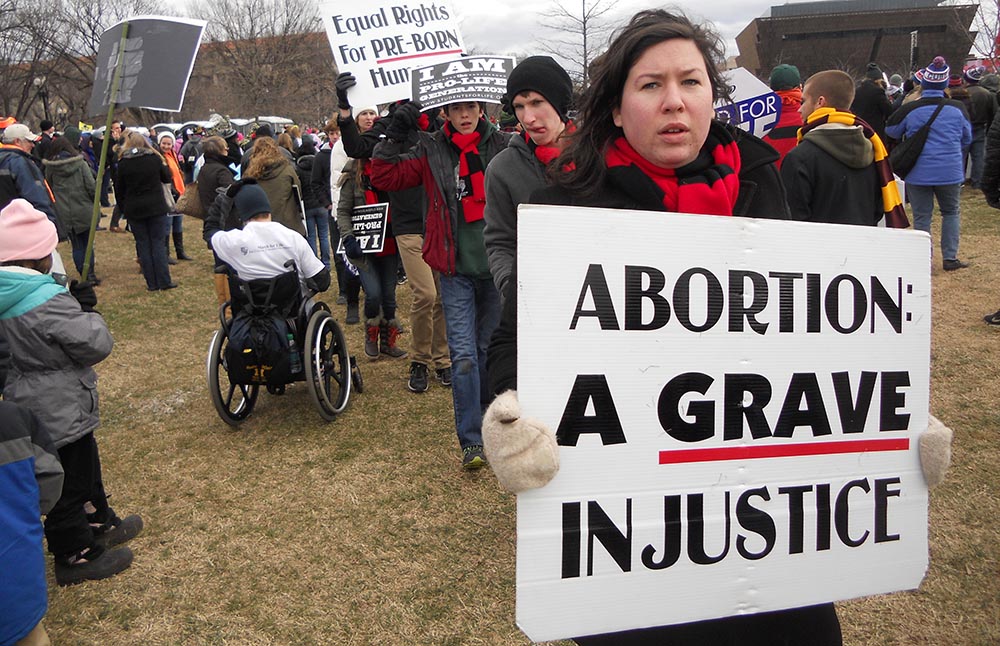 Many thousands of people from various walks of life gathered near the Washington Monument on Friday, January 27, for the 2017 March for Life.

The March for Life rally began around 11:45 am. It included music and pro-life speakers, including Vice President Mike Pence and Counselor to the President Kellyanne Conway. Advocates then began the march down Constitution Avenue.

Many of those at the rally and march were women and young people. 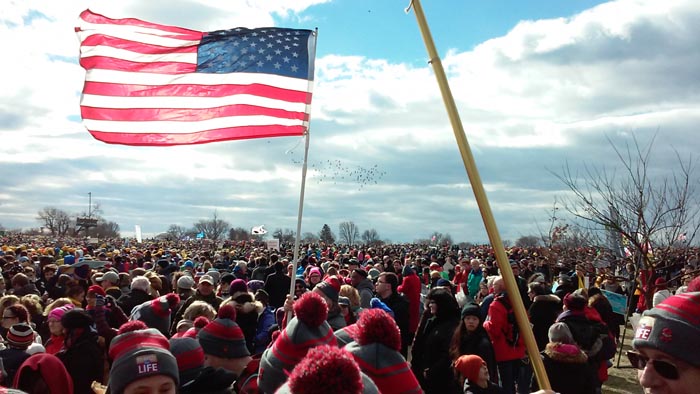 Attendees at the 2017 March for Life rally

Women shared why they joined the March for Life and what it means to be a pro-life woman.

“I’m here because I want to give a voice to the unborn,” said Jessica Howell, a 22-year-old woman from Quincy, Illinois. She shared that she wants the world to know the truth about preborn children and their right to life.

“They don’t have a voice, and they need one because they are humans just like everyone else. And I think it’s time for us to disregard the euphemisms, to disregard the thought that anyone has a choice over anyone else’s human life.”

This was Howell’s first trip to the March for Life with the organization Students for Life. “It’s not even about religion, it’s not about anything else, it’s just about the reality of human rights,” Howell added. “Everyone should live – that’s just common knowledge. And I think just us being here and giving the world that common sense is powerful. Because it speaks for itself in a way. Our presence just speaks for itself.”

Emilie Hines and Emily Wielan, both 19 years old and from the Boston, Massachusetts, area, attended the rally. They each held signs reading, “I AM A PROLIFE FEMINIST.”

“I decided to come this year because I believe that women deserve better than killing their unborn babies,” said Hines.

“I’m here because I have to speak up for those who can’t,” said Wielan. “[Being a pro-life woman] means we stand up for all women inside of the womb and outside of the womb. And real feminists are pro-life feminists.” 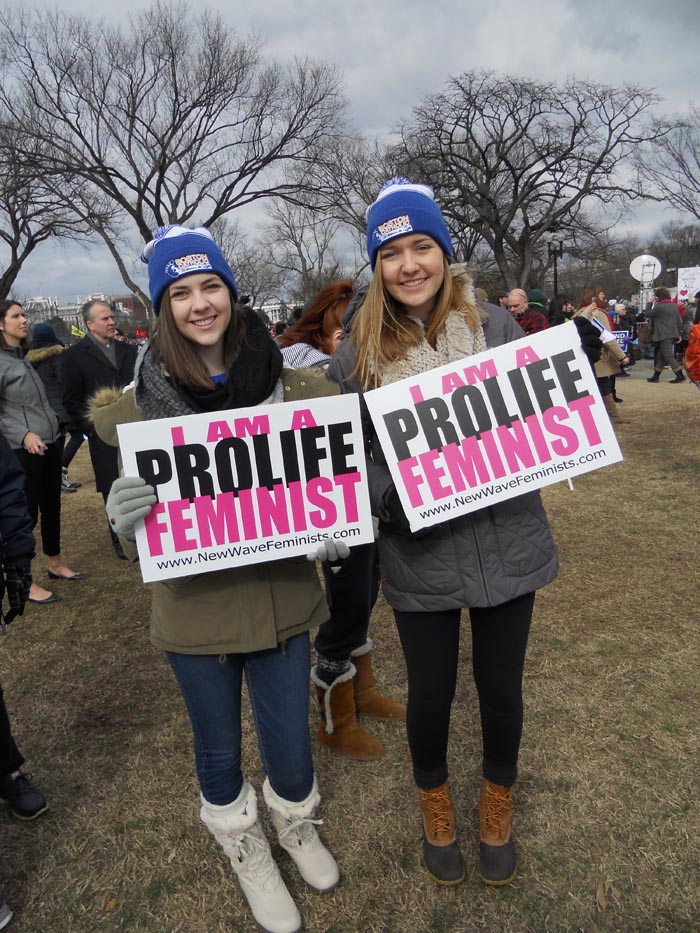 Explicitly pro-life feminist groups joined the 2017 March for Life and held exhibits on the Thursday before the march, including the Susan B. Anthony List and the Alice Paul Group, among others. Pro-life authors, former abortionists, and representatives from pregnancy centers, women’s fertility organizations, universities and other pro-life organizations also occupied informational booths.

Pro-life advocates often point out the harm women can experience in the decision for and in the aftermath of an abortion. They also bring up the fallacies in the argument that being pro-life is “anti-woman.”

“All we care about is women’s health,” said Howell, who pointed out the harm abortion can do to a woman’s reproductive system. “And not even the physical repercussions, but the emotional and spiritual repercussions with that. That’s soul-crushing. No one can deny that it’s soul-crushing. So I think for anyone to say that we’re against women is just ludicrous if you think about it, because what we want is for a woman’s soul to be whole. We don’t want it to be broken in that way where she literally loses a part of who she was.”

Pro-life individuals also highlight how abortion allows men to walk away from unexpected pregnancies with little to no responsibility.

“There is a lot of history in what abortion has done to women and how it has ruined the nuclear family. It has allowed men to not take responsibility in having children, therefore leaving single moms to make the choice on their own,” said Carla Pratico, 29. “So it has done nothing but hurt women in the long run.” 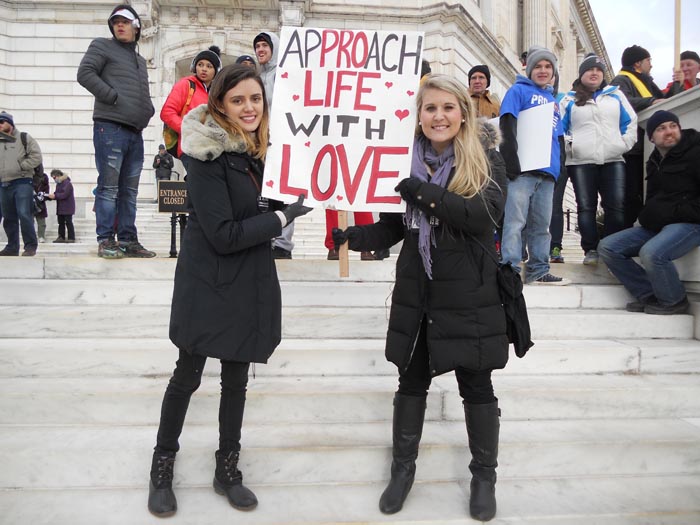 Pratico traveled from New York City to march. She did so because life begins at conception, since DNA is unique. “You can’t change DNA. There is never going to be another person like that ever again, and so they have a future and a hope that God gave them, and so it is valuable. And we should care.”

Holly Adams, also from NYC, added: “I feel that I should stand here and have a voice for those who can’t and defend those who are defenseless.”

When asked what she would say in response to claims that pro-life advocates are anti-woman, Adams, 24, responded: “I would say that women are born every day.”

And some women and men traveled beyond borders to attend the March for Life. This included the Society for the Protection of Unborn Children (SPUC), who carried the Scottish flag during the march.

Louise Grant is the Development Officer for the SPUC in Scotland. SPUC is the oldest pro-life campaigning and educational organization in the world. Members traveled to the March for Life 2017 because this year is the organization’s 50th anniversary. The SPUC formed in 1967 to debate a UK bill that became the 1967 Abortion Act. 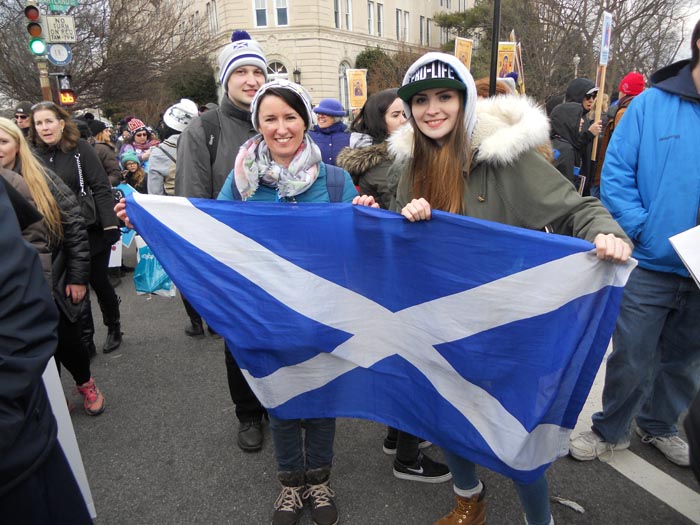 “Some of the students we have with us have been denied a pro-life group in their university as well,” added Grant. “So it’s just about getting them a little bit of encouragement to join in the biggest pro-life march in the world and taking this back to Scotland, and hopefully, we can build a stronger culture of life back home. So that’s why we’re here to march with you.”

Lily Kearns lives in Glasgow, Scotland, and also traveled with SPUC to the March for Life.

“We think that pro-life is a worldwide issue. It doesn’t matter what country you’re from — every life matters,” said Kearns. “We just came over here because we love babies, and we love American babies too.” 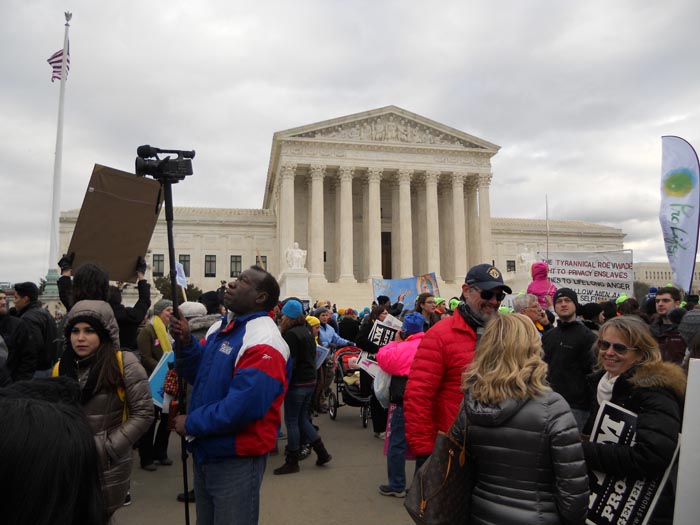 Pro-life protesters outside of the Supreme Court

While standing in front of the United States Supreme Court, with “Equal justice under law” engraved on the building’s facade, Kearns added: “It is a life, a life that we don’t ultimately have the right to take away. And it’s in your Constitution — the right to life, liberty and the pursuit of happiness. It’s the most important right, and nobody should claim to have a right to take that away — to try to disguise that as a right.”