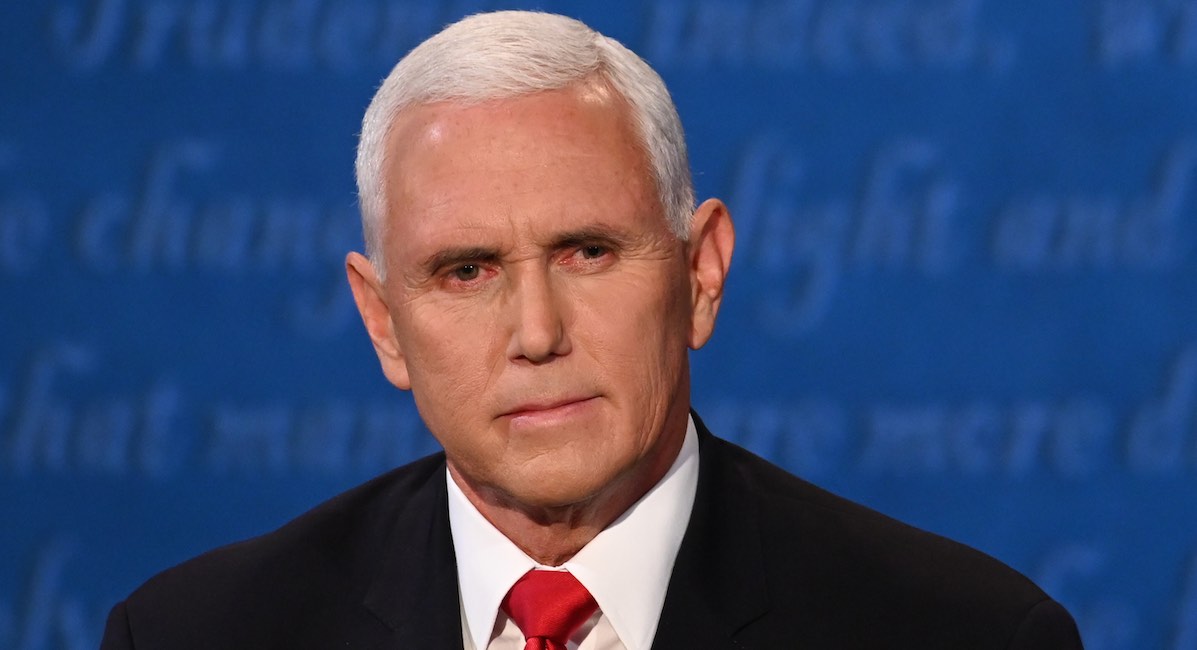 In an interview with RealClearPolitics on Tuesday, Pence expressed hope that abortion will one day be illegal in all states.

“The inalienable right to life is enshrined in our founding documents,” he said, “and however long I have left in the public debate, or on this earth, I’m going to be a part of advancing the cause of life all across this nation.”

Abortion supporters on Twitter expressed their outrage at Pence’s position, calling him “a patriarchal and male chauvinist,” a “religious bigot,” and a “fascist Republican who will force birth & let women did to satisfy perverse religious beliefs.” Others called out Republicans for their “phony states’ rights talking points.”

Republican patriarchal and male chauvinist Mike Pence said that there should be a nation wide ban on all abortions across the nation with no exceptions. He is prototypical religious bigot that makes women second class citizens. Make sure he never has a political office again.

He, like Graham, is a Fascist Republican who will force birth & let women did to satisfy perverse religious beliefs.#FreshWords@YahooNews

Mike Pence just announced that he is pushing to BAN abortion in all 50 states! He says a federal ban on abortion “is profoundly more important than any short-term politics.”

In his interview with RealClearPolitics, Pence told reporters that he “welcomes any and all efforts to advance the cause of life in state capitals or in the nation’s capital.”

Pence also said that a ban on abortion in all 50 states “is profoundly more important than any short-term politics.”

Pence, who has been, and continues to be, vocal about his pro-life beliefs, spoke at the annual Susan B. Anthony Campaign for Life gala on Tuesday evening in Washington D.C. During his speech, Donald Trump’s former VP said that overturning Roe v. Wade was only “the end of the beginning.”

READ: Media said woman was ‘forced’ to travel to NY for an abortion. Here’s why that’s untrue.

Angered by a pro-life gala being held the same day that U.S. Sen. Lindsey Graham put forward a bill that would ban abortions after the 15-week mark across all states, abortion supporters gathered around the National Building Museum to voice their outrage.

“The people at the Susan B. Anthony Group don’t care about peoples’ reproductive rights, so we’re here to remind them that most Americans do,” one man explained to Fox 5 reporters, as he projected the words “Abortion is Healthcare” onto the museum.

This is not the first time that Pence has expressed his pro-life beliefs or the first time that he has said abortion must be banned in all states. He has stood up for life many times, including after the fall of Roe v. Wade, when he said that “we sent Roe versus Wade to the ash heap of history, where it belongs. Now it falls to this generation to take the case for life to every state and every statehouse in America.”

Pence likewise promotes the fight for life on his social media platforms. On Tuesday, he tweeted, “let us resolve here and now that we will stay the course, we will not shrink from the fight, that we will not grow weary in the cause of Life.”

Honored to be with @marjoriesba & @sbaprolife tonight! Because you never gave up, never stopped loving, never stopped praying, on June 24th Life Won when the Supreme Court sent Roe v Wade to the ash heap of history and gave the American people a new beginning for Life! pic.twitter.com/lS6NWZpUER

Yesterday afternoon, Pence likewise urged Americans on Twitter to continue to “be champions for life.” He also tweeted that Americans must not rest “until the sanctity of life is restored to the center of American law in every State in the Land!”