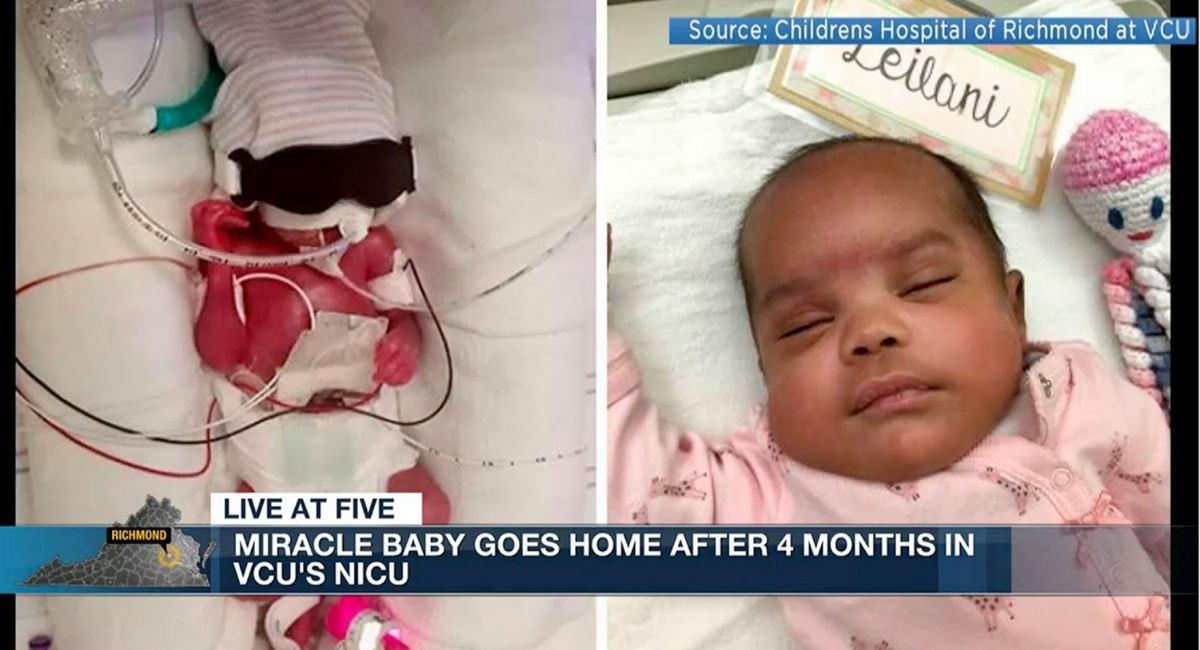 Shantel Allmon’s water broke when she was only 22 weeks pregnant, causing the Virginia mother to think she was suffering a miscarriage. “I honestly thought I had a miscarriage in my bathroom, so I’m crying hysterically; I start to panic,” she told NBC 12. Allmon raced to the hospital where she learned that she hadn’t miscarried at all. Instead, she was about to give birth to her micro-preemie daughter, Leilani, who weighed in at just over one pound.

“Scariest moment of my life, honestly,” Allmon said. “I didn’t even think it was a chance for her at 22 weeks.” While her chances may have been slim, Leilani defied the odds and is now thriving. After four months in the NICU (neonatal intensive care unit), she was able to go home to be with her family, a development that at least one doctor is describing as a “miracle.”

While there is no guarantee that babies born at 22 weeks will survive, it is becoming more common thanks to medical advancements. Little Leilani was able to receive the care she needed to thrive at Children’s Hospital of Richmond at VCU.

“We have amazingly experienced nurses and respiratory therapists and all the equipment that we need to do that here,” explained Dr. Joseph Koury, one of Leilani’s physicians.”We also have all the surgical and sub-specialties that we need for babies like her so we have the support that we need. So having that comfort, knowing that everybody here is good at doing this.”

Even still, Dr. Khoury acknowledged that caring for a micro-preemie like Leilani comes with a lot of risks. “It is very tough. There are a lot of unknowns when babies are born so prematurely. They have a lot of risk factors. Their survival isn’t guaranteed,” he said.

But Leilani beat the odds — something that amazed even her doctors. “She’s amazing. She’s a miracle, and we really have to tell people,” said Dr. Khoury. “She’s acting like a full-term baby, just feeding, not requiring any kind of support at all when she went home.”

Leilani was able to go home and meet her older siblings just one day after her original due date. “It’s such a relief to have her home and I can’t say enough what an awesome hospital Children’s was for my family,” Allmon said.

The organization TwentyTwoMatters knows that not all hospitals are equipped to help such premature infants, so they created a map consisting of every known hospital that is willing and prepared to help preemies.