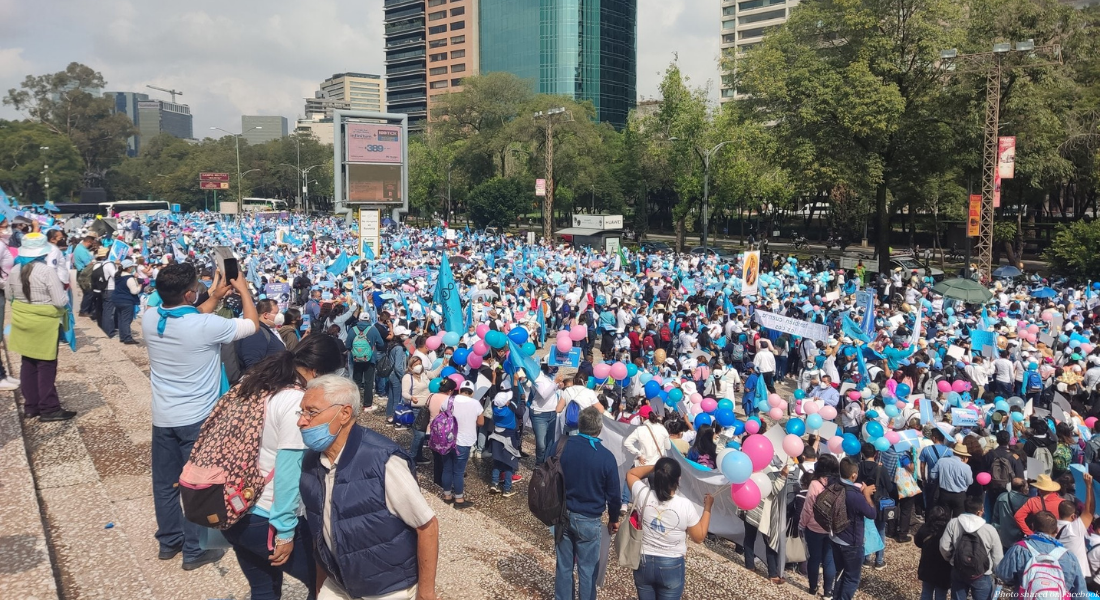 Less than a month after Mexico decriminalized abortion, more than 300,000 people gathered in Mexico City to show their support for life at all stages. According to the Catholic News Agency, the total headcount for the March for Women and for Life on October 3 throughout the nation was more than one million participants, including the smaller marches held in various locations.

A highlight was an ultrasound performed by a doctor on a 38-weeks pregnant mother, with the crowd having the opportunity to hear her baby’s heartbeat. Those gathered also heard a testimony from the event’s organizer, Marcial Padilla, and his wife, Mayela Sepúlveda. Together they spoke about their nine-year-old daughter, Ana Paula, who has a “very severe brain injury.”

“She can’t take care of herself, she needs everything from us. She is just as vulnerable as when she was a baby before birth or newborn,” they said. However, they also added that “we have learned that love for a sick child can be infinite.” The couple pointed out that despite the challenges of raising their daughter, her life has meaning.

Several other speakers headlined the event, including Mayra Rodríguez, who previously worked at a Planned Parenthood in Arizona, and Lianna Rebolledo, a pro-life advocate who became pregnant at the age of 12 following a violent rape. Rebolledo addressed the belief that women should be permitted to abort their children in cases of  rape, saying that many believe the rape “ha[s] already destroyed a girl’s life, that no one is going to love her, that she is no longer worthy, and that she should abort the baby. But you know what, that’s a double victimization,” she said.

Despite the fact that doctors encouraged her to abort, Rebolledo refused. “Fortunately the fact that they told me that I was pregnant changed my life,” she said. “Even as a 12-year-old girl, you ask yourself: Will getting an abortion take away the fact that I was raped? Will I forget the trauma? No, right?”

The march in Mexico City comes on the heels of the Mexican Supreme Court’s decision to decriminalize abortion, a ruling that many expect will lead to the full legalization of abortion in the near future. Many of the marchers participated in order to show their opposition to the recent ruling.

“Mexico marched, Mexico stood up, Mexico did not give up, Mexico showed it is in favor of life, in favor of women, in favor of the family, in favor of fundamental freedoms,” said Rodrigo Iván Cortés, president of the National Front for the Family. “Let the three powers of the union listen to us: executive, legislative and judicial. Let them listen loud and clear: we do not want more deaths, we want more life, we do not want them to legalize the crime of abortion, we want them to protect the pregnant woman and the baby that she carries within her.”