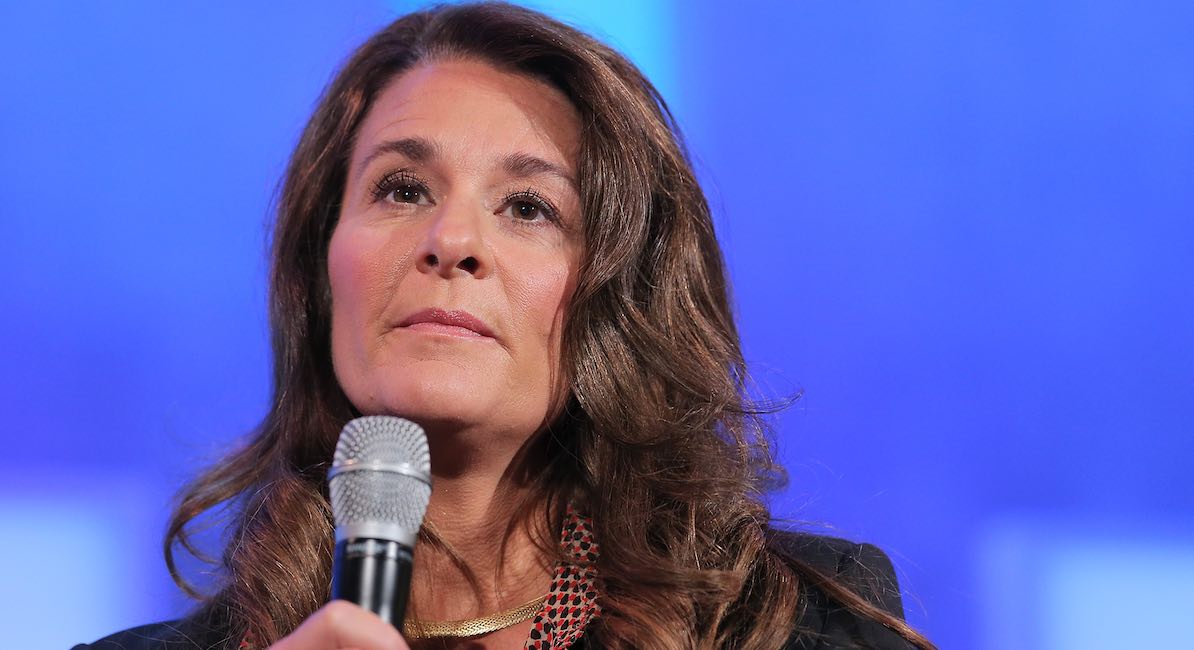 (National Catholic Register) There is a very funny scene in the 1980 film Airplane! that speaks to the current assumptions about what the West thinks is best for developing nations.

The movie features a young couple, Ted and Ellen, who visit the fictitious “Malombo” tribe in Africa as Peace Corps volunteers.

Instead of focusing on practical solutions that might best help the tribe to which they are assigned, the couple spends time introducing Western solutions that, while well-meaning, completely overlook the real needs of the people. For example, Ellen hosts a Tupperware party for the women of the village to help them “stretch” their food dollars and to “keep hot dog buns fresh for up to a month.”

The cognitive dissonance in the scene is, of course, part of the humor, but it also draws a bead on the mixture of ignorance and arrogance that has defined much of what passes as Western “aid” to developing countries.

Like this idealistic young couple in Airplane! Melinda Gates, the wife of Microsoft founder Bill Gates, seems to have her heart in the right place. She has a love for the poor and a genuine desire to relieve the suffering of others. She understands the influence that her position in society brings.

Unfortunately, Gates’ primary solution to the problems plaguing African and other developing countries is no better (and often a great deal worse) than Tupperware: Gates is strident in promoting widespread use of artificial contraceptives, as she argues in her new book, The Moment of Lift: How Empowering Women Changes the World.

Gates’ argument for contraception is experienced-based. She holds that contraception is the primary path for women to freedom and equality and cites her own success as a career woman “to work and have the time to take care of each” of her and Bill Gates’ three children, who are precisely spaced three years apart.

Moreover, she says that when it comes to contraception, “no woman I knew went without it.” If Western women are healthy, educated and powerful — a packet of adjectives she comes back to frequently — Gates reasons that such benefits are a result of unlimited access to contraception.

But Gates is a puzzle. She is passionate about contraception and yet she also professes to have a great love for her Catholic faith.

As she relates, she received a Catholic education through high school, attending the prestigious Ursuline Academy — a Catholic boarding school in Dallas — before attending Duke University. She also takes pride in noting that her parents attended a Marriage Encounter retreat (at her father’s insistence) and her mother not only “believes in the Church” but also “goes to Mass five times a week … reads, goes to silent retreats and explores spiritual ideas with passion.” Nevertheless, despite the great influence that she says the Church has had in her life, Gates has apparently never encountered a woman who in her married life has followed Church teaching on contraception.

It is telling that The Moment of Lift includes no references to the tremendous advances in non-contraceptive (and Church-approved) methods of achieving and avoiding pregnancy.

For instance, one wonders what Gates would make of technology like the natural fertility app developed by a Swedish nuclear physicist, or how she might consider the potential benefits to the poor provided by “CycleBeads,” a reproductive physiology-based method promoted by the Institute for Reproductive Health at Georgetown University. CycleBeads is well-known as a simple, low-cost, easy-to-teach and natural family planning method that has greatly benefited women in developing nations. The method — which relies on the woman’s natural fertility cycle — does not require women to walk miles and miles every few months to receive contraceptive “shots” or have their IUDs adjusted.

It is equally telling that, in a later chapter, Gates describes natural family planning in general as “the rhythm method,” even though neither teachers nor practitioners in the fertility-awareness-based field have used that term for more than 40 years.

Such misnomers, though, may not indicate Gates’ animus toward fertility-based-awareness methods, so much as her ignorance of such methods — either in how they work or how they can benefit women. Indeed, this can only be the case if she has surrounded herself, intentionally or otherwise, with peers who have only known and used artificial contraception.

Indeed, we might assume that Gates’ ignorance regarding fertility awareness extends even to the Church’s teaching on such matters. But her own words indicate rather a truculence to such teaching.

In her book, Gates points out that it is “hugely reassuring” to her “that a huge majority of Catholic women use contraceptives.” She also claims to have met with “high-ranking officials of the Church” to discuss her disagreements with the Church’s teaching on family-planning methods — although she doesn’t name the officials nor the topics covered. Instead, she simply notes that the Church officials shared “similar concerns” about the plight of the poor.

Gates does provide some horrifying stories about the ravages of poverty and its particular impact on women and girls. These stories include personal anecdotes and experiences shared with her by those who serve the poor in countries in Africa and Asia.

For example, she relates how young girls can be married off as early as age 11. She also points out the prevalence of female genital mutilation and sexual trafficking. In one poignant passage, Gates reports on children as young as 5 “baby-sitting” for tiny infants so that their mothers could go out and scrape together enough food for the day. She also tells about children looking through garbage dumps for food, children dying from diarrhea, mothers dying in childbirth and newborns dying because they don’t receive even basic postpartum care.

Likewise, Gates’ book is valuable for expressing concern — and outrage — at the substandard hospitals the poor must rely on and at the lack of educational opportunities for women. In her book, she also helps raise awareness about the need in these countries for neonatal care, preschool programs, healthy food initiatives and microloans to small family businesses.

However, as Nigerian-born pro-life activist Obianuju Ekeocha points out in her “Open Letter to Melinda Gates,” none of these problems are solved by contraception, and the millions of dollars spent on contraceptive pills, implants and devices imported to African nations and other developing countries by wealthy Western aid organizations would be better used to address the conditions that necessitate such aid in the first place.

Why is the bulk of Western financial aid, as Ekeocha notes, focused on ensuring “that the African woman is less fertile” — especially when most African cultures welcome and celebrate new life as a gift from God?

Ekeocha rightly notes that there are multiple risk factors associated with the use of hormonal contraceptives, as American women have long complained, while no similar side effects exist with the use of fertility-awareness methods.

As Ekeocha asks, does “a woman in Africa with a contraception-induced blood clot … call 911 or an ambulance or a paramedic? No, she dies.” Moreover, Gates does not even touch the issue of the failure rate of hormonal and injectable contraceptives, which Great Britain’s leading abortion service, BPAS, has admitted. Nor does Gates acknowledge the increased risk for HIV infection among African woman who use hormonal injections (which The New York Times admitted poses “an alarming quandary”).

In a news clip that went viral, Ekeocha instructed a BBC talk-show host on the real needs of African women, of the side effects of hormonal contraceptives that are not fully disclosed to them when promoted, and of the “ideological colonization” that contraceptive programs sponsored by the West represent.

Even if the poor do achieve a momentary “lift” from the widespread use of artificial contraceptives, as Melinda Gates contends, it is a lift that will likely have no lasting impact. You don’t eliminate poverty by eliminating the poor.

After using contraceptives, women may have fewer children, but they won’t necessarily have a new maternity hospital, or a new preschool, or successful crops, or educated daughters.

The Catholic Church has much wisdom and lived experience to share with Melinda Gates. Perhaps, with the help of testimony from Ekeocha and other women outside her peer group, she may still inquire into how the Church can help women around the world achieve a true moment of lift.

Editor’s Note: This article was published by the National Catholic Register and is reprinted here with permission.