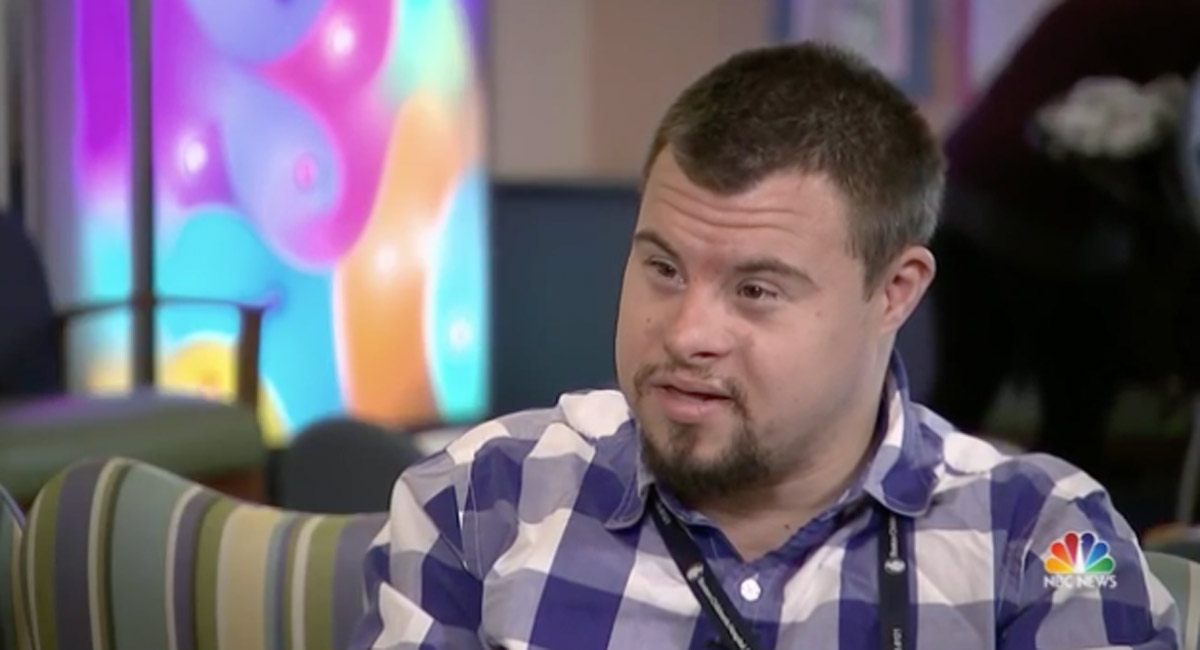 Nathan Simons was originally a patient in the Down syndrome program at Boston Children’s Hospital, but now, he’s an employee, working as a patient liaison. The hospital celebrated his six year anniversary as an employee this week, where he originally started working just eight hours a week. But as his supervisors noted his enthusiastic work ethic and the positive effect he had on patients, his hours increased until he became the first full-time employee with Down syndrome in the hospital’s history.

“I just love it! I love the people who come here and give good feedback,” Simons said of his job. “It’s amazing and my parents are like, ‘Yes, Nathan you finally got a full time job! Thank you, Lord!’” And while Simons and his family are thrilled about his job, his supervisors seem to be even more excited. “He comes to work each day with enthusiasm and provides inspiration and optimism for families with Down syndrome and they look at Nate and see what is possible,” said Dr. Nicole Baumer.

Simons helps new patients and their families, and also helps tackle administrative tasks and paperwork. Originally, the position was meant to be a temporary, two-year position. But hospital administrators were so impressed with Simons that they kept him on, and instead, created a new apprenticeship program for other adults with Down syndrome, and Simons trains and mentors them as they go through the two-year program.

READ: Model with Down syndrome fulfills dream to walk the runway at NY Fashion Week

His presence has also been inspirational to the families who come to the program for help. “They look up to me because I’m a good role model to them,” he said of children with Down syndrome. “They see me, being independent and living on my own.” Baumer agreed. “For families who don’t know a lot about what the future will bring for their children, he shows an example of what things can be like,” she said.

“I just feel proud, very proud, of my job,” he said. “I’m so happy to be here.” His next goal? Marriage to his girlfriend, Logan.

The Down Syndrome Program at Boston Children’s Hospital is one of the oldest and largest of its kind, offering multidisciplinary care for people with Down syndrome before birth through age 22. They also provide resources, support, and advocacy to their families. Their goal is to see all people with Down syndrome have a future like Nathan’s, with meaningful family and social relationships and engaging vocations in school or work.