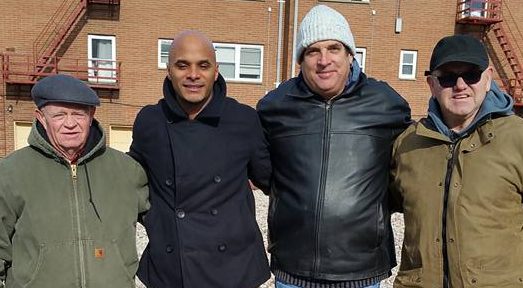 Marcus Wallace spent the first seven years of his life believing his aunt was his mother. It wasn’t until his family began referring to her as his aunt that he knew something wasn’t quite right. He just didn’t know what it was. Then at age 20, he discovered his birth certificate and saw a stranger named as his mother.

Unsure of what this meant, he headed to the New York Public Library where he found a newspaper clipping from 1985 detailing the story of his birth. His mother, Dorothea Ballas, was a 21-year-old student at Fairleigh Dickinson University in Teaneck, New Jersey, when she gave birth to Wallace in her dorm room. Scared and alone, she placed the baby boy in a trash bag, tied a knot, and placed him in a dumpster behind a gas station. It was a frigid January day when she left her son to either freeze to death or suffocate.

“I broke down” after finding this information, Wallace told The New York Post. “I got on the subway and cried all the way from 42nd Street to Flatbush Avenue. I had lot of whys. What was wrong with me? Why me?”

Heartbroken and distraught, Wallace’s self-esteem plummeted and brought his health down with it. He suffered two strokes but eventually began to accept what had happened and reclaim his life.

“My mother threw me in a dumpster,” he said. “It took me a very long time to deal with that, but I’ve gotten past it.”

He decided to track down the reporter who had covered the story of his birth and abandonment. Through this connection, he was able to have The New York Post arrange a reunion with the three people who found and rescued him from the dumpster.

Solomon Randelman was 25 years old in January of 1985 when he was driving home from a girlfriend’s house. He stopped at the gas station to fill his tire with air, but the pump was broken. He headed to another gas station, where he filled his tire, and headed to the bathroom. However, the bathroom was too dirty, so he decided to go behind the dumpster. That choice would end up saving Wallace’s life.

“I heard a crying noise,” he recalled.” I kept hearing it. I lifted the lid, but all I saw was garbage.”

Randelman called the police. That’s when Officers Phillip Lavigne and Sheridan Ogden arrived on the scene.

“It happened so fast,” Randelman told The Teaneck Daily Voice. “I remember [the officers] being very disgusted.”

Lavigne climbed into the dumpster carefully, taking notice of a black garbage bag that stood out from the rest. When he opened it, he found the newborn baby, naked and with the umbilical cord and placenta.

“I was in a state of disbelief – to have someone just discard a living being like that,” Lavigne recalled to The New York Post.

Holding the baby, he jumped into the police car and Ogden sped to the hospital, where doctors told them they had arrived just in time.

“I think I had wings on that car,” said Ogden.

With further research, Wallace was able to learn more about his background. Investigators had easily discovered who his birth mother was because her name was on papers that were in the trash bag with him. There was also a note in the bag which read, “I love you. I don’t want to do this.”

Ballas pleaded guilty to the attempted murder of her son, was sentenced to probation, and didn’t do any jail time. Her parents wanted to place the baby for adoption, but Prithwie asked for custody of his son, whom he named Marcus. He won custody and baby Marcus was taken to Trinidad where he was raised by his father’s sister and his grandmother while his father finished school.

“I called her Mommy,” Wallace said of his aunt. “I still love her as a mother. She took care of me as if I were her own.”

Now a father himself, Wallace has reached out to his birth mother and her family but they have not responded to him.  He doesn’t believe his mother wants anything to do with him, but he still has love for her and hopes to meet her someday. He has offered her his forgiveness.

“She’s still my mother,” he said. “She carried me full term. I have nothing but love for the woman. I’m very grateful that I’m able to be a loving father to my own little girl.”

The reunion of the four men was an emotional one, and Randelman said he still tears up talking about the day he found Wallace. But when he got to see him, 31 years later, he said, “my heart was warmer than ever.” Randelman doesn’t have children of his own, and Wallace holds a special place in his heart.

“I love you, Marcus,” he told him at their reunion. “You are special, and you were meant to be here. Don’t let that incident tell you otherwise.”