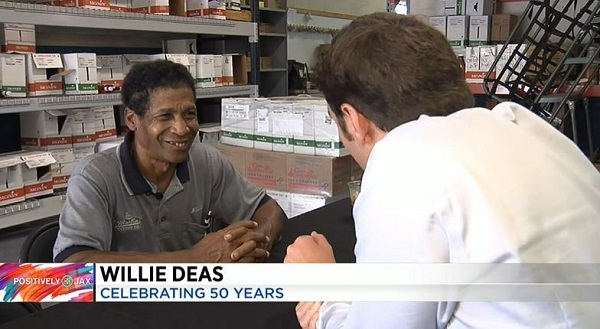 Willie Deas has lived his entire life in Jacksonville, Florida — but he’s not your average resident. Born with an intellectual disability, he spent most of his childhood in an institution. The Florida Farm Colony for the Epileptic and Feeble Minded, then re-named Sunland Training Center, was a place to send people like Deas to make them go away. At the age of 18, he couldn’t even count to 10, or read. But that didn’t mean his life was going to be anything less than extraordinary.

The Martin Coffee Company was founded in 1957 by Fred Martin, and he needed someone to work part-time as a janitor. One of Martin’s employees lived next door to Deas, and recommended him; he explained that though Deas had intellectual disabilities, he thought he could make a good employee. 50 years later, that prediction has proved itself to be very true.

As Jacksonville.com explained, Deas turned out to be a reliable employee who also turned out to be a man of many talents. He was able to, for example, listen to numerous motors running on the processing line and know just by sound when one might be broken.

“He’s a jack of all trades,” Ben Johnson, the current president and grandson of founder Fred Martin, said to Jacksonville.com. “He’ll see something that needs to be done and before I even mention it, he’ll have it done. I’ll be in my office and I’ll see him out mowing the lawn. He’ll say, ‘I just wanted to get it done before it starts raining.’ He’s brilliant. Once he’s doing something, he’s like a robot.” Now, he’s able to many things, anything from operating machinery to making awesome cups of coffee, and he says he loves his job too much to ever retire.

READ: Man with Down syndrome inspires with long-running career: ‘People with disabilities can be independent’

For Johnson, Deas is more than just an employee, too. “He’s been here five years longer than I’ve been alive,” Johnson explained. “I’m 45 and he’s known me since I was born. He’s like family.”

To celebrate his 50th anniversary at the coffee plant, as well as his 68th birthday, Deas’ fellow employees had a surprise planned for him. Deas reported to work as usual, only to find a party planned for him, with his family and friends there. Johnson presented him with a plaque, and then he was given numerous gifts, including a 50-inch flat screen TV.

“I just love him to death. To see the accomplishments that he has made in his years due to a slight handicap,” Josephine Davis, one of his six sisters, told WJXT. “He did not let it stop him.”