According to the New York Times, Louisiana has voted to pass Amendment 1, known as the “Love Life” amendment. This pro-life amendment would add language ensuring that there is no right to abortion in the Louisiana Constitution, and the state would not be required to fund it.

Authored by state Senators Katrina Jackson (D), Bet Mizel (R), and dozens of co-sponsors on both sides of the political aisle, the amendment reads: “To protect human life, nothing in this constitution shall be construed to secure or protect a right to abortion or require the funding of abortion.” The amendment will prohibit state taxpayer dollars from being spent on abortion. Abortion laws in the state have not changed and abortion is still legal. Amendment 1 will help prevent judges from blocking pro-life laws passed by state legislators and will help ban abortion in the state should Roe v. Wade be overturned.

“Passing the Love Life amendment is important not only to protect pregnant people and preborn children here in Louisiana, but also to demonstrate the power of pro-life Democrats,” said Sophie Trist for Secular Pro-Life. “If the pro-life Democrats in Louisiana join with Republican counterparts to affirm that our constitution values preborn life, the Democratic Party may realize that using extreme pro-abortion ideology as a litmus test is a losing issue.” 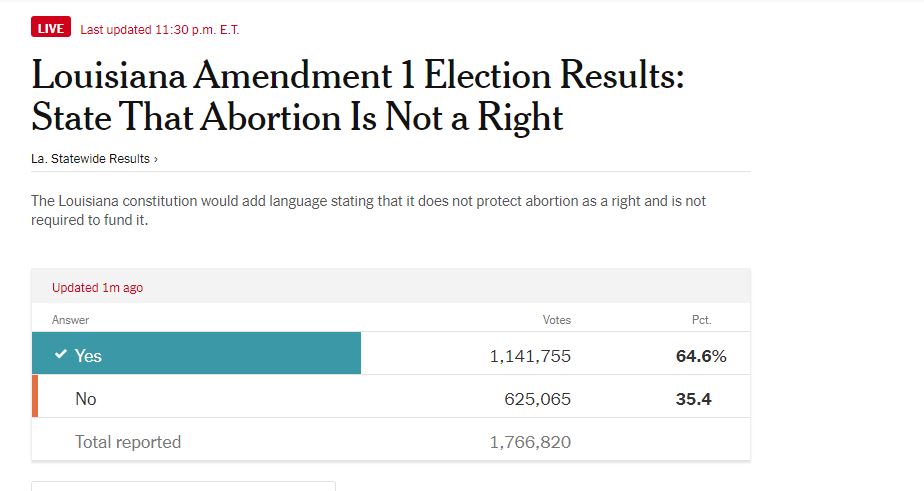 “THANK YOU LOUISIANA for showing your overwhelming love for life by voting YES on Amendment #1, the Love Life Amendment protecting babies and their mothers,” said Louisiana Right to Life on Facebook. “WE ARE OVER 1 MILLION LOUISIANA VOTES FOR LIFE!”

March for Life also celebrated the news calling it “a major #prolifewin” that “shows the power of the bipartisan pro-life movement in Louisiana!”

Louisiana already had a “trigger law” in place — the “Human Life Protection Act” — that would ban abortion with an exception for the health of the mother if the Supreme Court overturns Roe v. Wade. Under Amendment 1, there are no exceptions.

“It’s important to understand that Amendment 1 is not a ban on abortion,” said Jackson in an op-ed for The Advocate. “It simply keeps abortion policy in the hands of our legislators rather than state judges.” In July, the Supreme Court struck down a law authored by Jackson that would have required abortionists to have admitting privileges to a local hospital in case of an emergency.

The Associated Press and Ballotpedia confirmed that Amendment 1 passed with more than 65% of precincts reporting.

Editor’s Note 11/4/20: This article was updated to include quotes from pro-life organizations, and to clarify the status of abortion in Louisiana.