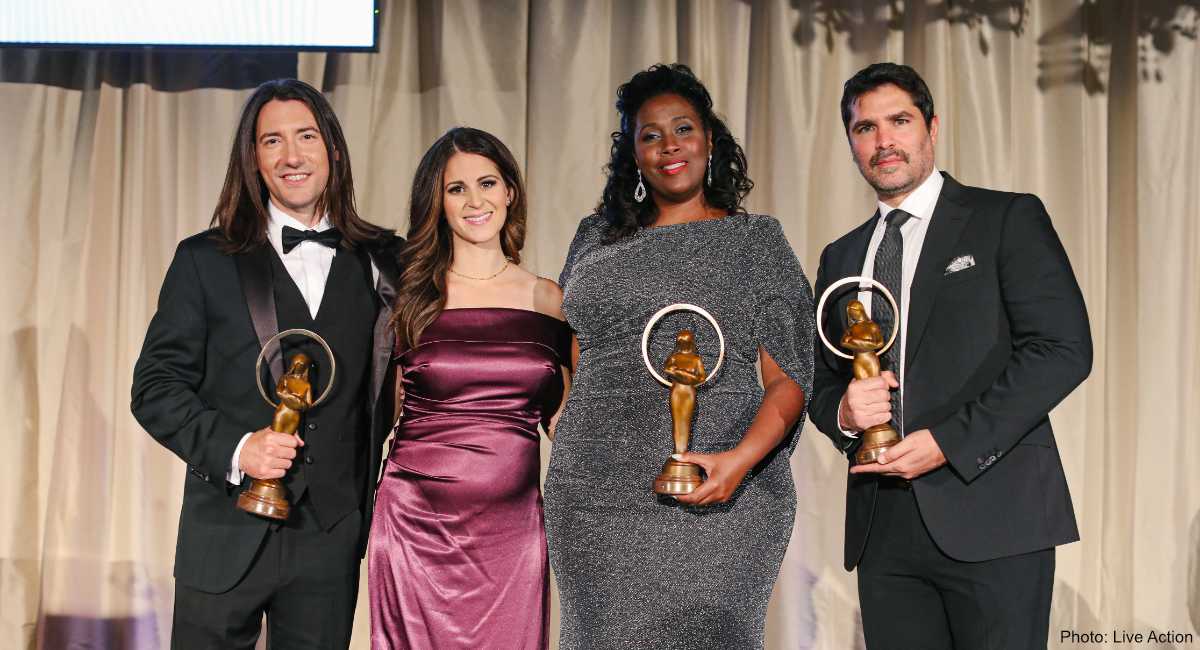 Live Action held its second annual Life Awards Gala this past Saturday, August 21st, 2021, at the Ritz-Carlton Laguna Niguel Hotel in Dana Point, California. The event, which was designed to “honor outspoken defenders of preborn children and their families within media, politics, entertainment, and activism,” was hosted by Live Action’s Founder and President, Lila Rose. Speeches were given by Alan Sears, founder of Alliance Defending Freedom, as well as the three Life Award recipients: actor and philanthropist Eduardo Verástegui, Louisiana State Senator Katrina Jackson, and investigative journalist David Daleiden.

In his remarks, Alan Sears reflected on Lila Rose’s history as an activist and Live Action’s growth as an organization. He then drew parallels between the manner in which General Dwight D. Eisenhower’s army discovered, documented, and disseminated the horrors that took place in concentration camps during World War II, and the manner in which Live Action exposes the atrocities of the modern abortion industry.

The first Life Award recipient of the evening, Eduardo Verástegui (best known for his role in the film, “Bella“) related personal stories of the ways in which particular individuals impacted his pro-life journey. He was able to change the mind of one young man who had intended to coerce his girlfriend into an abortion; this young man went on to name the daughter Verástegui helped to save Bella, after Verástegui’s film. Bella, now a young woman, sent a video message to the audience at the gala to share her testimony of life.

READ: ‘All of our voices are important’: A look back at Live Action’s inaugural Life Awards Gala

Both Verástegui and Senator Katrina Jackson emphasized the role of faith in their pro-life convictions.

“Only what you do for God will last,” said Senator Jackson in her acceptance speech for the second award given that evening. “For me, this is a God thing… I don’t think that parties should ever direct any politician [or] elected leader on what their agenda is. Our agenda has to be about the people. And if someone doesn’t have an opportunity to breathe, then we’re never about the people.” She expressed the belief that “government should be a ministry,” and that government officials should be led by the Holy Spirit.

As the National Catholic Register notes, “Jackson was the sponsor of Louisiana’s Unsafe Abortion Protection Act, which put safety restrictions on abortion facilities in the state; the law was struck down by the U.S. Supreme Court in June 2020.”

“How can we celebrate ourselves by killing others?” Senator Jackson asked, referring to our nation as a whole.

Senator @KatrinaRJackson during her acceptance speech at the @LiveAction Life Awards. #prolife pic.twitter.com/O6SJ8Y4nYt

The final Life Award recipient, investigative journalist David Daleiden, recounted the fruits of his undercover labors — the closures of multiple companies that partnered with Planned Parenthood in aborted baby body part sales, the galvanizing of public opinion on the issues of fetal tissue trafficking and experimentation, and the removal of taxpayer funding from Planned Parenthood in multiple states.

CMP founder, @daviddaleiden, receives a @LiveAction life award for upstanding investigative reporting for the cause of the unborn. #lifeawards2021 pic.twitter.com/S8E1Z8128z

“Our culture is experiencing a great awakening right now about the human dignity of our brothers and sisters in the womb and about the inhumanity of abortion practice and its parasitic subsistence,” Daleiden said. “But as the light continues to shine in this darkness,” he continued, “it is my great privilege and deep honor to be just one of many bold parts of the effort to undo this knot in our civilization.”

Funds raised at the event will be used for a massive pro-life marketing campaign involving billboards, bus wraps, and ads on TV, radio, digital media, and in print.

Editor’s Note: This post has been updated since its original publication.