De De and Joe Fasciano were awaiting the birth of their first child when doctors gave them a difficult diagnosis. They were told that their little boy had Harlequin ichthyosis, a genetic condition that creates hard, thick, scaly skin. Two days after receiving the news, doctors delivered the baby boy via emergency C-section with a team of specialists standing by. His parents named him Evan.

“He was given his name due its Celtic meaning, ‘Young Warrior’, and which he has lived up to from the moment he was born,” his mother wrote on her blog.

A 2011 study of 45 people with the condition showed a survival rate of 56% with most deaths occurring in the first three months due to either sepsis or respiratory failure. The study also found that those who died all had homozygous mutations while 52% of the survivors had heterozygous mutations – meaning the two mutations that caused the condition (one inherited from each parent) were not the same.

Born nine weeks early at Yale New Haven Children’s Hospital, doctors had become concerned about Evan at around 27 weeks gestation, but after 3D and 4D ultrasounds were performed, he finally received the diagnosis at about 31 weeks. His parents didn’t know much about Harlequin ichthyosis but were determined to do everything they could to help their son, starting with his early delivery.

“It was a very intense feeling not knowing anything about his condition,” wrote his mother. “Luckily we were fortunate enough to have Yale Dermatologists that are experts in Ichthyosis. Even though his birth was an emergency situation, the doctors and nurses knew to be expecting a Harlequin fetus and had the appropriate care ‘waiting’ for him.” 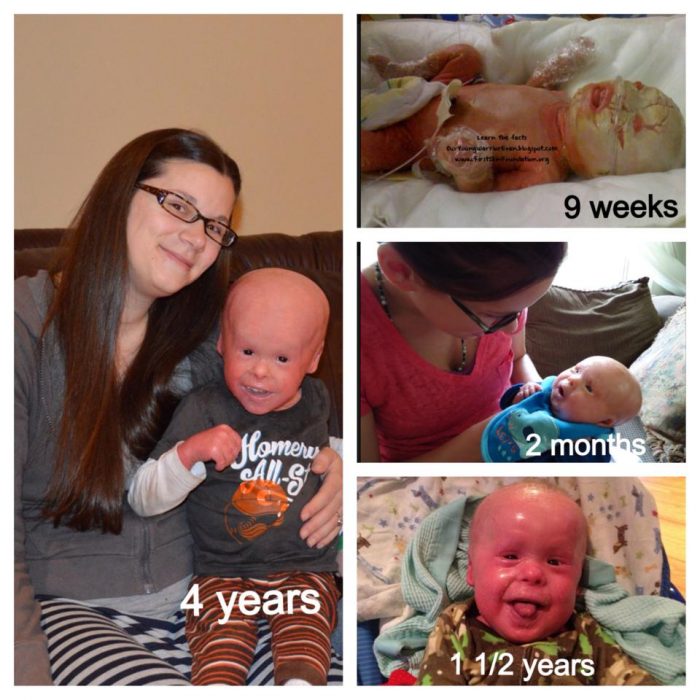 Evan spent 58 days in the neonatal intensive care until finally being sent home.

“Ever since Evan has been born, we knew right away that there was no cure and there were only treatments,” his mother said in an interview. “[…] It was hard because we didn’t really know what to expect. And it was scary just hearing the information that was available at that time in 2010. Hearing that a lot of babies might not survive, I remember looking at him, though he was covered up, it was just a relief for me to see his tummy go up and down.”

Each day Evan maintains a very strict skincare protocol. His mother devotes a great deal of care and time to taking care of her son and making sure he is comfortable and healthy. Evan gets two 40-60 minute baths each and every day in order to exfoliate and moisturize. His skin grows at a rate 10 times faster than average, so he is constantly needing to wash the dead skin off. Moisturizer helps to prevent the cracking of his skin. In addition, he gets eye drops and eye ointment while he sleeps since his tight skin doesn’t always allow his eyelids to close.

In addition to caring for his skin, Evan needs help regulating his body temperature because he is unable to sweat. This also affects his body’s salt levels and his need for calories and fluids. He can easily become overheated and dehydrated, and eating can be difficult.

Because he was a preemie, Evan also deals with some developmental challenges. He is now five years old, and he is able to crawl and stand with help. He is learning to walk, and his mother said he is full of determination. He sees physical, occupational, and speech therapists, and is enjoying Kindergarten.

“With all things considering, Evan has a happy go lucky personality,” said his mother. “He is extremely patient, has a huge smile on his face during Aquaphor applications and can’t get enough splashing in the bath!! He is my hero.”

His father says that there have been occasions where people have made rude comments, but his parents are determined to live a positive life.

Evan recently became a big brother, and his parents have a great deal of hope for his future. He is exceeding expectations thanks to the devotion and hard work of his family and medical team. And thanks to those who came before him with the condition and those who figured out how to save and improve lives, he is not only surviving, but is a happy little boy with a bright future.