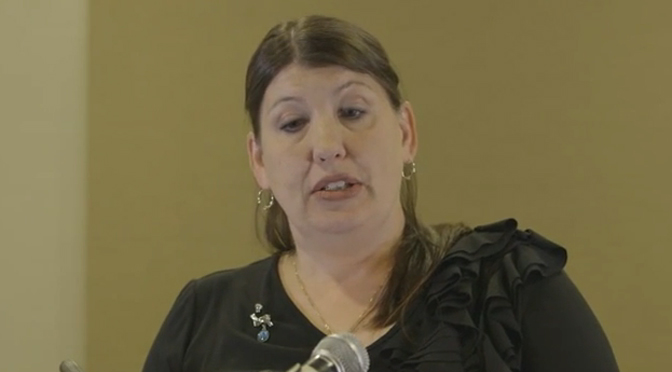 Catherine Adair grew up in a liberal Catholic home where they were raised to believe that abortion was a woman’s right. Her mother was a member of their local National Organization for Women group.

So when Adair became pregnant at 19, it wasn’t much of a surprise that her mother scheduled an abortion for her. Adair, however, had this notion that she and her boyfriend would live in her parents’ basement and raise the baby together while working and attending college. But by the time she saw the doctor she was 11 weeks along and was told that she was running out of time for the abortion. Adair felt at that point that she had no choice but to go through with it.

After it was over, Adair felt empty. She buried her feelings of depression and anxiety and made the decision to never speak of the abortion again. Instead of dealing with these emotions, she dedicated her life to fighting for abortion rights, even joining pro-abortion groups in Washington D.C. for marches and taking a job with Planned Parenthood after she graduated from college with a degree in women’s studies.

“I was gonna be the most radical feminist,” she said in a speech for the Pro-Life Action League. “So when I saw […] Planned Parenthood was hiring, I jumped at the chance. I was really excited. I really bought the corporate line that Planned Parenthood puts out there. […] I got involved in Planned Parenthood because I felt like it was a badge of honor.”

Adair says they eased her into jobs at Planned Parenthood, starting her out as a receptionist, than moving her up to answering the phone and scheduling appointments. Next, she was trained as a counselor, which is when she started to see the truth about Planned Parenthood and abortion.

Her job as a counselor was to bring each woman into a room and make her comfortable. At this point the woman had already paid for an abortion. Adair would go over the woman’s medical history, take her blood pressure, check her pulse, tell her she could place the baby for adoption or keep it, and explain the abortion procedure as the doctor gently removing “the contents of the uterus.”

“The assumption is once she’s there, she knows what she wants. Who am I to tell her what her she wants,” said Adair. “[…] And yet at the same time, we couldn’t say baby or embryo or fetus because that would upset her.”

Despite it being against protocol, girls would come into the room with their abusers, said Adair. Some women didn’t speak English and Adair wondered if abortion was really want they wanted.

After being a counselor for a while, Adair was trained as a medical assistant, helping the nurses and doctors in the procedure room. After she and the nurse would prepare the room and the patient, the doctor would come in, do the abortion and leave.

“Here’s what the doctor patient relationship was at the clinic,” said Adair. “When [the room] was all ready to go, the doctor came in. If she was lucky, he might make eye contact with her. Might even say her name. Usually not. And they would do the abortion and they would leave.”

Adair relates feeling scared as she would wait with the patient until she, an untrained women’s studies major, would determine when the woman would be ready to move to recovery. She talks about how the staff jokingly referred to the POCs as not products of conception, but products of children. She remembers thinking it was funny that people thought they were killing children, because she truly believed they weren’t children.

Then one day, after a second trimester abortion, Adair was asked to clean up the room even though she had not been present for the abortion. She recalls:

I walked in the room. […] I look over at the table […] and there was a jar and in the jar were arms and legs. And I stood there and I looked at it and at first it was almost looking at the beauty of the perfection of these little feet attached to this leg and these little hands. And I couldn’t process it. I thought, I can’t be seeing this. This isn’t real. I just backed out of the room in shock. […]

I had just this horrible sense that I had been lied to. And I didn’t realize it before. I didn’t realize we were talking about babies. And when I saw that, I couldn’t lie anymore. […] Sometimes I think God put me there at that moment […] to say Look. Look at what you’re doing.

She went back to school to become a teacher and never spoke about her time at Planned Parenthood. She didn’t even include it on her resume. She got married, had children, and left her days at the clinic behind.

She started going back to the Catholic church and began teaching CCD to the children. And after finding her way to Confession, she began praying the rosary everyday and begging for forgiveness. Eventually, she asked God to ask forgiveness for her from her baby whom she had aborted, and all of the babies whom she helped abort.

“One of the reasons abortion keeps growing and happening,” said Adair, “is because nobody sees the victim. Ya know, there’s no victim of this holocaust because you can’t see the victim. I don’t know if my baby was thrown in the trash, incinerated, used for medical experiments, sold to some company so they could figure out how to make our soft drinks taste better. I have no idea.”

Then one day, Adair went to CareNet, a pregnancy resource center, to drop off some baby wipes. She ended up telling a staff member about her own abortion and her time at Planned Parenthood. She was asked to share her testimony, and video taped a speech which was played at a CareNet benefit dinner. Adair was afraid that all of the pro-life people in the room would think poorly of her and might possibly even throw their food at her. But instead, she saw them cry and mourn with her. They reached out to her with kindness and compassion.

“Love of pro-life folks is like a love I never knew existed,” she said.

Today, Adair is a pro-life speaker and mom to five children. She shares her story with others in hopes of changing hearts and minds about abortion while exposing the truth. She thinks about the child she aborted every day and says that anyone who is pro-choice is only pro-choice because they have never seen the victims of that choice.