Planned Parenthood Mar Monte (PPMM), which was at the center of an undercover investigation into Planned Parenthood’s trafficking in aborted body parts, could soon be granted $2 million in federal taxpayer dollars for projects that involve “relocation and renovation” assistance.

The funding comes from the “Community Project Funding” program, which the San Francisco Chronicle says allows lawmakers to file a request for “pots of money for specific causes in their districts….” Each member of Congress may submit up to 10 requests for community funding to the House Committee on Appropriations to be considered for fiscal year 2022 appropriations bills – and two of Congresswoman Zoe Lofgren’s (D-Calif.) requests asked for funding to be split between Planned Parenthood Mar Monte (PPMM) projects, according to the lawmaker’s disclosure letters.

“The Planned Parenthood Mar Monte (PPMM) Community Clinic (MMCC) has acquired a new location and will be moving to an improved 3,500 square foot site,” Lofgren wrote in the consolidated table of accessible data. “The center requires tenant improvements and construction to make it a functional health care facility.”

Funding for the second project — the “Planned Parenthood Mar Monte Blossom Hill Health Center Relocation and Renovation” — is also set at $1 million and will “offer PPMM the ability to design and construct a training facility to train medical professionals and licensed staff to provide care throughout the region. Additionally, federal funding will help pay for laboratory and medical equipment such as exam tables, ultrasound machines, autoclaves, and IT hardware,” to make it a “state-of-the-art facility.”

The funding would “allow the Blossom Hill Health Center to accommodate a larger patient volume and increase laboratory capacity…” Rep. Lofgren stated on her website.

The “larger footprint” would help PPMM to increase clients by 10% in the first year, she claimed. 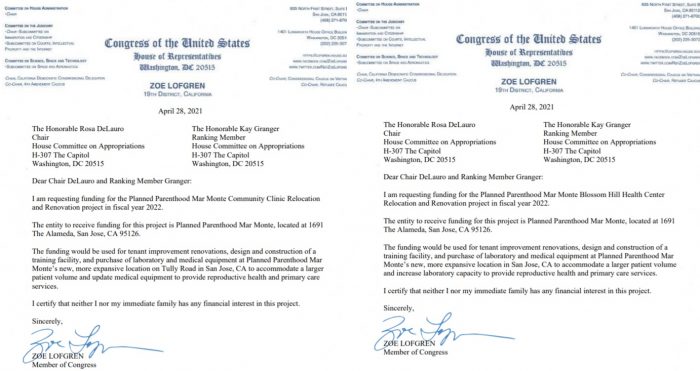 PPMM has been at the center of an undercover investigation into Planned Parenthood’s alleged illegal sale of aborted fetal body parts conducted by the Center for Medical Progress (CMP). One example uncovered during the investigation showed that PPMM was paid nearly $25,000 for three months’ worth of aborted fetal body parts by its partner StemExpress. A 2017 article published in HIPAA Journal alleged that PPMM and others improperly disclosed protected health information (PHI) and personally identifiable information (PII) of female patients to StemExpress in violation of the HIPAA Privacy Rule.

In 2016, the Senate Judiciary Committee referred Planned Parenthood Federation of America, four Planned Parenthood affiliates (including PPMM), and a number of fetal tissue procurement organizations to the FBI and the Department of Justice for criminal charges regarding their fetal tissue practices and transfers. To date, there has been no public resolution published in the matter.

According to a review that was published in December 2020 by the Government Accountability Office (GAO), Planned Parenthood Mar Monte has received over $200 million in tax dollars from Medicare/Medicaid/CHIP.

Rep. Lofgren requested the current funding for both projects be directed to PPMM’s San Jose location at 1691 The Alameda, which houses PPMM’s regional office. This location currently commits abortions and also offers “gender affirming hormone therapy,” a program launched in 2020 and described on its website as “a core service.”

The money will be allocated through the Health Resources and Services Administration (HRSA), which also funds Federally Qualified Health Centers (FQHCs) — health centers which provide comprehensive health care without abortion, and which vastly outnumber Planned Parenthood facilities across the country.

Editor’s Note, 3/14/22: This piece originally identified PPRM in two places that should have been listed as PPMM. We regret the error.