In 2014, during a challenging pregnancy, Matt and Ashley Opliger endured the tragic loss of their baby girl Bridget at 24 weeks and five days. From that loss, the non-profit organization Bridget’s Cradles was born, which now serves thousands of families across the country during their darkest moments — the loss of a beloved child.

At 13 weeks, Ashley began to experience heavy bleeding and went to the emergency room for help. She learned she had a subchorionic hemorrhage (SCH) and was told she had a 50% chance of miscarrying her daughter. She was put on bed rest, only leaving her house for doctor appointments, and even then, she was in a wheelchair — taking every precaution she could to preserve her baby’s life. But even with her best efforts, Ashley was still experiencing daily bleeding, and every time she went for a checkup, the doctors would tell her that baby Bridget was further and further growth restricted.

During this time, Ashley’s mother, who is a knitter and a postpartum nurse, began making a blanket for baby Bridget — the couple’s first child. She felt called, however, to turn that blanket into what looked and felt like a cradle, which would wrap around and snuggle a tiny newborn. It would be that cradle that would help Ashley and Matt get through the thick grief of child loss and help others to do the same.

Bridget was stillborn on October 22, 2014. “She was so, so tiny, 13 ounces, but fearfully and wonderfully made. She had little, tiny fingernails, she had peach fuzz over her lips, little eyelashes, just a tiny bit of hair — dark hair like myself, she had long fingers like me,” Ashley told Live Action News. “Perfectly formed, beautiful sweet little girl. For the 24 hours that we had with her in that little cradle, I sang to her every song that I could think to sing to her, we kissed her nose and her face. I would just press my lips on her little nose and try to freeze time so I would never forget what that felt like.”

The couple tried to pack a lifetime of memories into those 24 hours, and as they had to say goodbye to their baby girl, they shed countless tears, to the point where Ashley felt like she couldn’t breathe. The hardest part of the experience, she said, was not having her baby to hold anymore. They decided to bury Bridget in the knit cradle inside of her casket and held a funeral service and candlelight vigil to honor her. The family all wrote letters to Bridget, letting her know how loved she is. 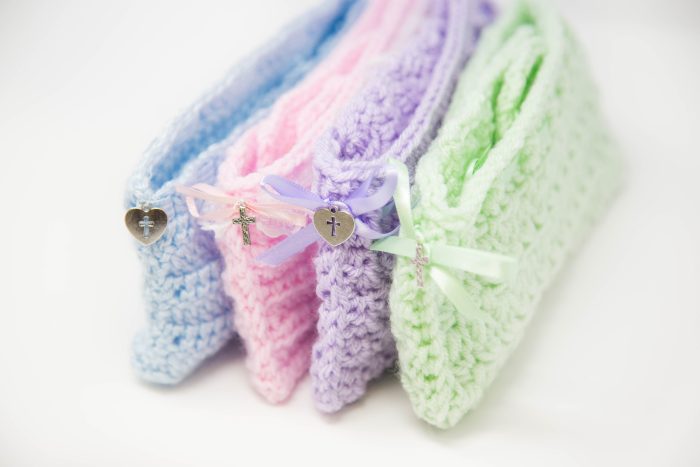 “[M]y faith in God and knowing that she’s in Heaven has been what has allowed me to get through this and to know that I’ll get to see her again and get to see her forever — that’s been the core of my hope and my healing,” said Ashley. “But having the cradle, and being able to have a sacred space that was made just for her by her Grammy and knowing she was all cuddled up there, she was warm, she was loved. […] The cradle really blessed us and now we want to bless other people with that same comfort.”

“One of the things we always say at Bridget’s Cradles is that we believe the cradle is a temporary comfort but the hope of the Gospel is eternal. And the hope that we get to see our babies again — that’s what fuels us to share that hope with people,” Ashley added.

That one act of love from a grandmother has now rippled across the nation into thousands upon thousands of acts of love from strangers to families in mourning. Volunteers from every corner of the United States, and especially in the non-profit’s hometown in Kansas, knit and crochet tiny cradles featuring lace around the edges and a cross at the foot. There is a keepsake attached to each, so if the family decides to bury their baby in the cradle, they can keep a piece of that cradle with them.

The cradles also feature a prayer and Psalm 139: “You formed my inmost being; You knit me in my mother’s womb. I praise You, because I am wonderfully made; wonderful are Your works!” 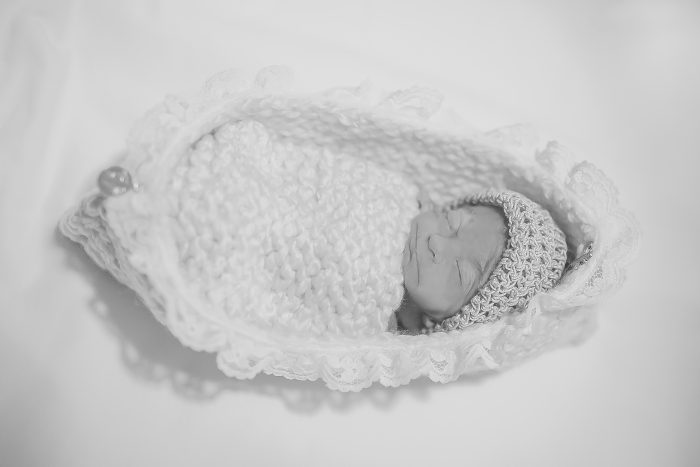 Bridget shortly after her birth in the cradle knitted by her grandmother. ⒸAshley Opliger

Each Bridget’s Cradle is gifted to a hospital free of charge. The non-profit has no paid staff and very little overhead, allowing them to reach 32,000 families a year at 1,300 hospitals across all 50 states. Ashley learned that some hospitals experience as many as 200 pregnancy and infant losses per year and were putting the babies into newborn blankets that were too large for their tiny bodies or washcloths that weren’t functional or comforting. The organization often receives notes from parents, thanking them for the cradles.

One mother named Shannon wrote to Bridget’s Cradles, saying, “Grady was presented to us in a little blue cradle with blue trim and a silver cross and he was dressed in a white hat. He looked so handsome, peaceful, and perfect. […] Having the cradle allowed us to safely be with him and provided comfort to us as we knew that this cradle had been prayed over and made with a family like us in mind.”

In addition to the families, hospital staff members feel blessed to have the cradles. “We realized that the hospitals are very grateful for these gifts because a lot of them, they don’t have the resources. The nurses want to show respect and give these families something to hold their babies in,” said Ashley. 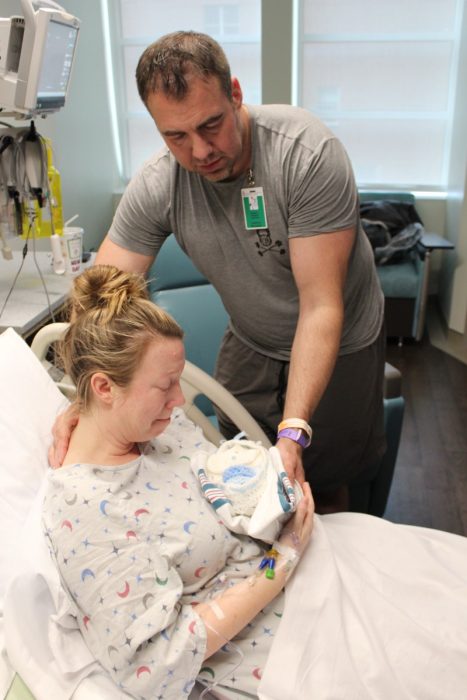 Shannon holds baby Spencer in his cradle from Bridget’s Cradles. Shannon and her husband also received a cradle when they lost their son Grady. ⒸAshley Opliger

As the non-profit grew, it partnered with Rachel’s Gift, which trains nurses on how to properly instruct parents on their choices when it comes to their baby’s remains. While parents can set up a private funeral with a funeral home, many hospitals will provide a group burial for all the babies lost within a certain time frame — or they have what is called “hospital disposition.” These babies are put with medical waste, likely incinerated, and disposed of with the garbage.

But since Rachel’s Gift began training nurses, one hospital’s dispositions dropped from 72 in one year to just eight the following year because parents were equipped with the knowledge of their options.

Bridget’s Cradles accepts monetary donations as well as donations of materials (except yarn). Knitters and crocheters can apply to volunteer on the organization’s website to make the cradles.

Today, Ashley estimates that Bridget’s Cradles are available at about a third of the nation’s hospitals with a labor and delivery unit. Her goal is to have a presence in every hospital in the nation so that families who experience such a tragic loss have their own sacred space to hold their precious babies.