The original decision to defund Planned Parenthood was partly motivated by the Center for Medical Progress’ undercover videos depicting Planned Parenthood’s fetal organ harvesting activities, which may violate several federal laws. “As a doctor and Alabama’s Governor,” Robert Bentley (R) said, he did “not want Alabama to be associated with an organization that does not” “respect human life.”

In August, Gov. Bentley announced the termination of Planned Parenthood Southeast’s contract with Alabama, invoking the government’s ability to do so under section VI, Term, Amendment, and Termination of the Alabama Medicaid Agency Provider Agreement.

By the end of the month, PPS had filed a lawsuit to restore the money, arguing Bentley was “trying to dictate where a woman can go for contraception and other preventive care if she’s enrolled in Medicaid,” and that “restricting access to providers will do nothing to help the urgent problems we face.” Despite these claims, reports have shown that there are only two Planned Parenthood locations in the entire state of Alabama, compared to 234 health clinics which are able to provide comprehensive care to low-income individuals: 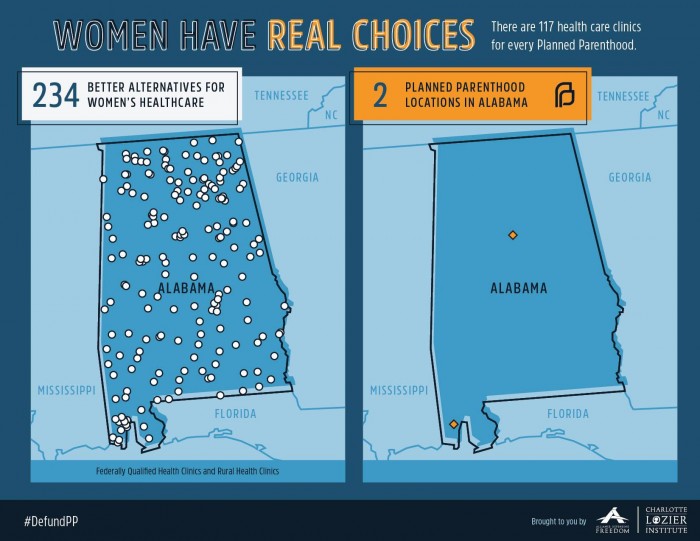 Nationwide, Planned Parenthood has 665 facilities, while there are 13,540 comprehensive health clinics able to provide holistic care for patients – without the scandals involving the trafficking of fetal body parts, and without abortion.

In his latest decision, District Judge Thompson claimed the state failed to identify a legal cause for terminating the contract, rejecting the videos as a cause because none of them occurred in Alabama, and because he contends the state’s PP affiliate did not participate in the so-called tissue donation program.

Thompson also argued that the defunding may have violated the federal Medicaid Act’s limits on a state’s ability to disqualify family planning providers for reasons not directly related to care quality.

The state of Alabama believes that the reasons for Planned Parenthood’s disqualification are related to care quality at Planned Parenthood, as expressed by Gov. Bentley in a news statement: “I am disappointed, and vehemently disagree with the Court’s ruling today. We are reviewing the opinion and will determine the next legal steps within the appeal period.”