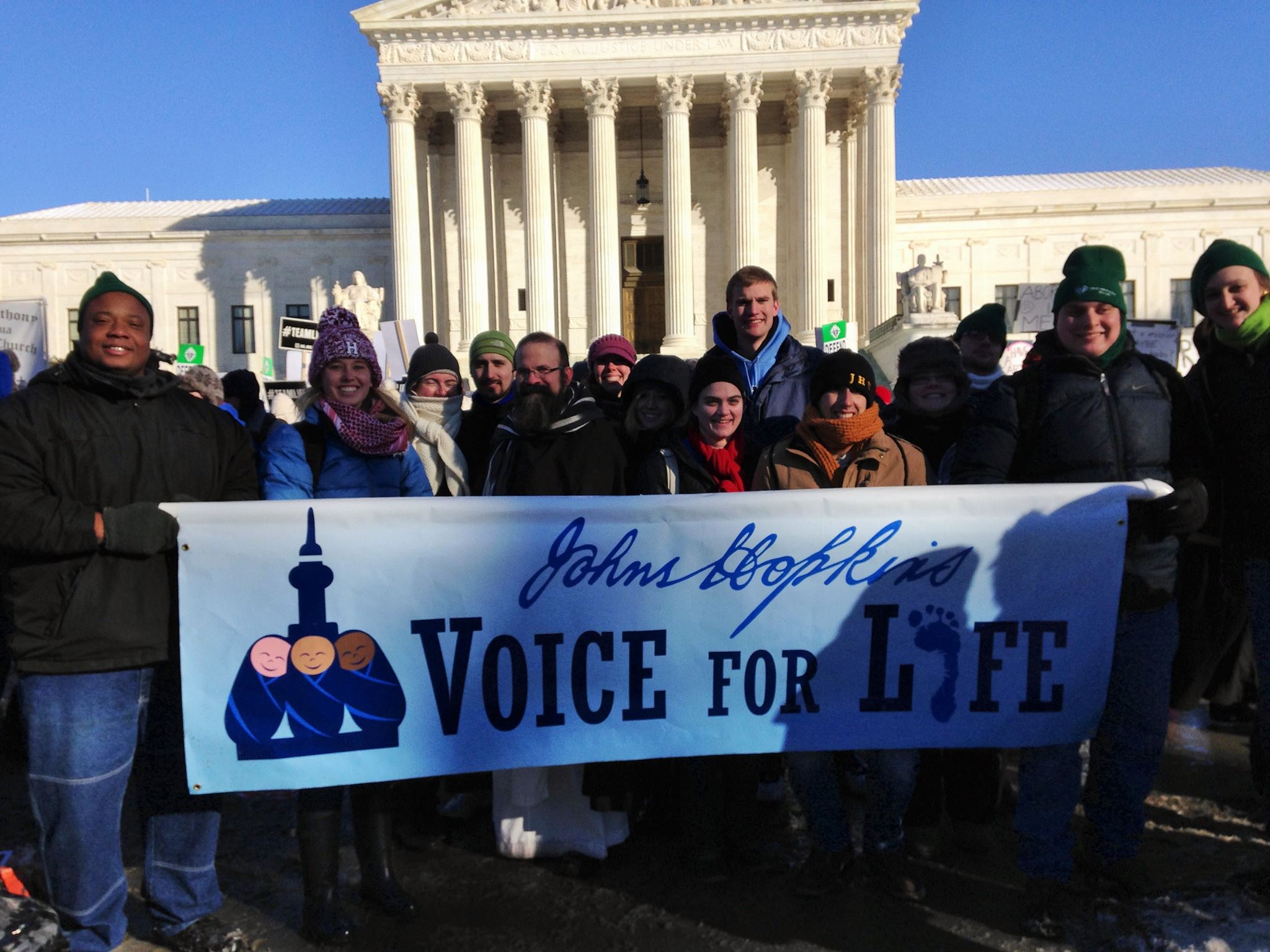 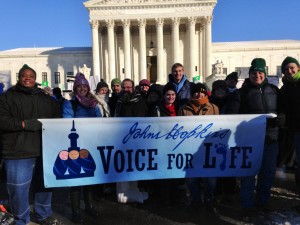 Students for Life of America recently awarded Johns Hopkins University (JHU) Voice for Life as the Best New Group of the year, and with good reason. JHU Voice for Life had to overcome obstacles just to get their group started, facing attacks and discrimination from fellow students and the student government. Their application to form a new group was initially rejected by the student government on the basis that the student government considered sidewalk counseling a form of harassment of women and therefore a violation of the university’s anti-harassment policies. In addition, they claimed the group’s web link to The Center for Bio-Ethical Reform was “offensive and poor representation of the school” and they couldn’t approve a group associated with it. Twice JHU Voice for Life was rejected, but once the news picked up their story, things changed. “Fox News did a piece on us,” explains Andrew Guernsey, President of JHU Voice for Life, “Mike Huckabee and a lot of people started jumping on it because Hopkins is a big deal which is why we wanted to get the group going – because there are so many future medical leaders at Hopkins who don’t even think about abortion.” Once the news stories took off, JHU Voice for Life put in an appeal with the student government through the judiciary branch, threatening a lawsuit based on the free speech that is promised to students in student groups at JHU. With the help of Students for Life of America and Thomas More Law Center, the group argued that not allowing them to form a pro-life group was unconstitutional based on the university’s student government constitution. The university promises free speech but discriminated against the pro-life group. The student government refused to budge, but in the end, the decision to refuse group status to JHU Voice for Life was unanimously overturned. Meanwhile, the school newspaper ran an editorial denouncing JHU Voice for Life, stating that the group’s views were hateful and shouldn’t be allowed on campus. The student government compared the pro-life students to white supremacists and called them a hate group. “They said we had too much activism. In their official notes,” says Guernsey, “they said [our] group isn’t pro-life but radical anti-abortion. They didn’t even pretend to not be engaging in shameless censorship.” JHU Voice for Life pressed forward, setting up a fetal model display at the university’s spring fair. A reactionary group that had formed called Voice for Choice showed up to protest. The young women stood near the JHU Voice for Life display, shirtless with duct tape over their breasts. They handed out condoms and had, ironically, written “respect my body” across themselves. They claimed that JHU Voice for Life was using language that was hateful by stating that abortion is murder, and they called for the university to stop the pro-lifers. “But it backfired,” says Guernsey, “because most people saw it as way over the top, even pro-choice people. In a sense, I feel like the opposition and discrimination has helped us in a way that we were able to reach a lot of people.” Despite all the controversy and time focused on fighting the student government, JHU Voices for Life accomplished a great deal in 2013. They held Respect Life Week featuring a Cemetery of the Innocents with 139 white crosses in front of the library representing the 139 lives lost to abortion every hour. They hosted guest speakers including Ryan Bomberger of The Radiance Foundation, and former abortionist Dr. Beverly McMillan. The group cosponsored a Rachel’s Vineyard symposium with the University of Baltimore featuring testimonies from women who regret their abortions. In addition, JHU Voice for Life members volunteer at crisis pregnancy resource centers and every other week they stand outside of Planned Parenthood. So far they’ve helped save three babies from abortion and even watched one worker quit. That worker told the group:

You have no idea how much you guys have done with your presence here.

Guernsey says it was a real honor to receive the Group of the Year award and hopes they can live up to it in the coming semester and years ahead. In 2014 they plan to focus on the Pregnant on Campus Initiative to make the campus friendlier for pregnant students. They’re also trying to schedule a student debate on abortion, however Voice for Choice turned down their offer. “It’s a work in progress,” says Guernsey, “but we’re hopeful we’re making a big impact on future leaders of the medical industry. It’s amazing how many students have never thought about the [abortion] issue, or were ambivalent about the seriousness of it and its effect. We’re filling a much needed message on campus that really wasn’t here before.”