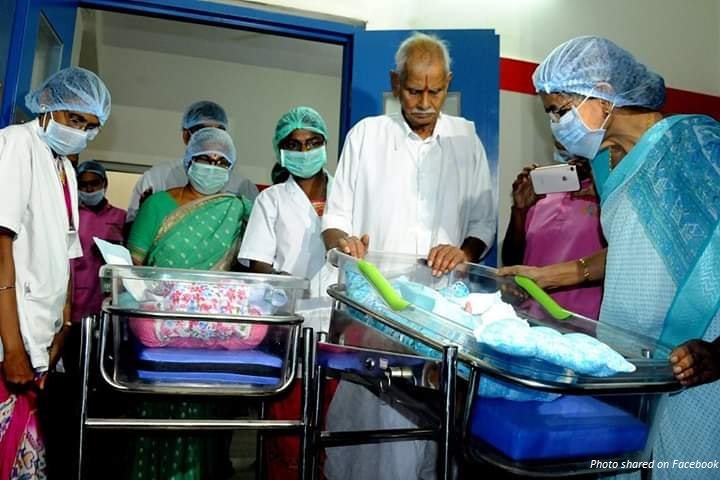 A 74-year-old woman has given birth to twins with her 80-year-old husband, in a disturbing case exposing the ethical problems with IVF. Erramatti Mangayamma, a farmer from Andhra Pradesh, India, gave birth via c-section last week, according to Dr. Sanakayyala Umashankar, the director of Ahalya IVF.

“The surgery went well … the mother and the babies are all healthy with no complications,” Umashankar told CNN. Though Mangayamma and her husband, Raja Rao, were married in 1962, they were never able to have children naturally, and Mangayamma went into menopause 25 years ago. But when she found out about IVF from a neighbor, she pursued it.

“She decided to try the method and approached us. We were surprised at her willpower. We conducted all the medical tests and found that she was medically fit for conception through IVF,” Umashankar told the Hindustan Times, explaining that she had a “strong desire” to be a mother. “So, we tried with an egg obtained from another donor and fertilized it with the sperm of Raja Rao through IVF method. Luckily, she conceived in the first cycle itself and she was found to be pregnant this January. Her health condition had been constantly monitored by cardiologists, pulmonologists, gynaecologists and nutritionist all these days. Since it is very difficult for her to have normal delivery in view of her age, we had to perform a Caesarian operation.”

Due to her age, Mangayamma will not be able to breastfeed her children. Both parents are in intensive care, according to media reports, with Rao having suffered a heart attack, and Mangayamma suffering from an undisclosed illness. Still, Umashankar said this has given Mangayamma a “new lease on life.”

“She is very confident now,” he said. “More confident than ever in her life and she is looking forward to the next chapter of her life with the kids.”

According to Mangayamma, she was stigmatized in her village because she never had children. “They would call me a childless lady,” she told the BBC. “We tried many times and saw numerous doctors, so this is the happiest time of my life.” While the social pressure this couple faced is undeniable, children are not a way to find personal fulfillment or to silence gossips. They are actual human beings, whose needs must be taken into consideration. The sad reality of their situation is that their children will be orphaned, almost certainly at a very young age. And a complete lack of consideration for the twins’ future was shown by Dr. Umashankar, who felt it was acceptable to put a 74-year-old through IVF, despite what that would mean for the children she carried.

Babies are not products to be bought and sold at will. They are human beings, with their own value and dignity. IVF destroys that, turning childbearing from a privilege to be entrusted with to a right to which people feel entitled.