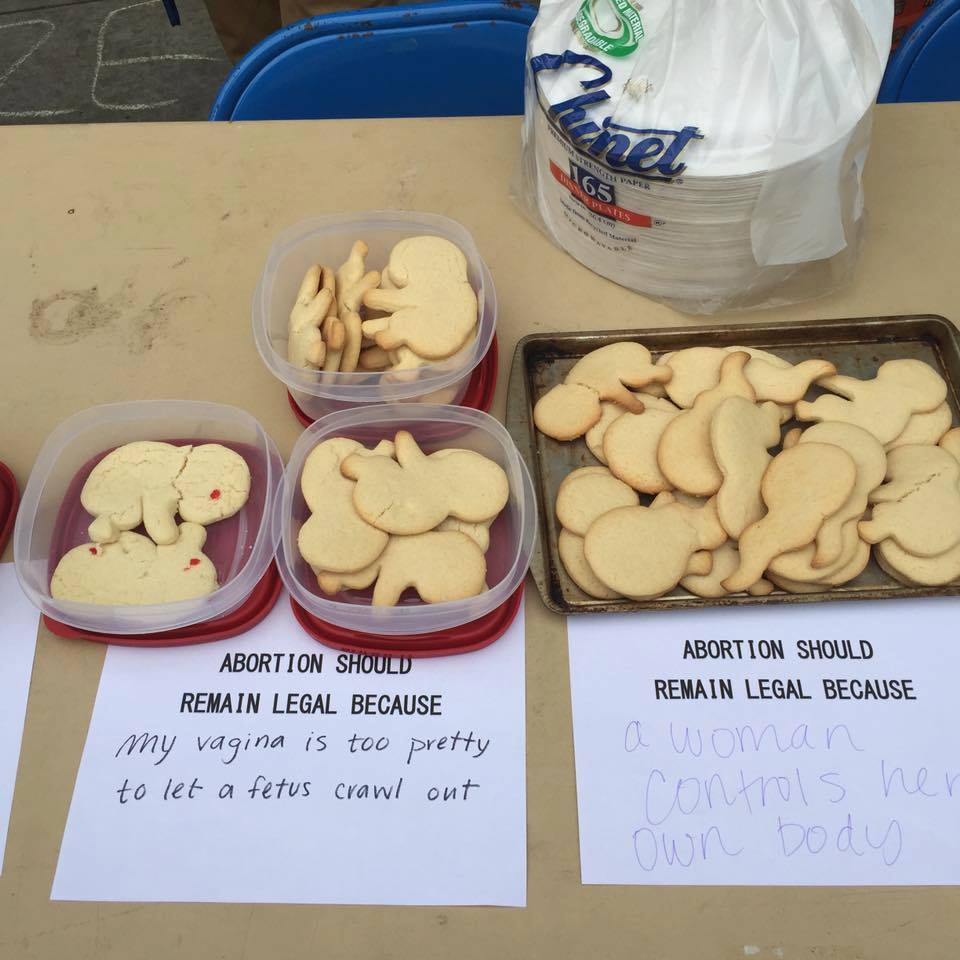 The Internet was recently made aware of what extreme and perverse ends pro-abortion students are willing to go to.

Earlier this month, the University of North Georgia’s Skeptics Society invited students to munch on cookies of preborn children while writing why abortion should remain legal. The answers included typical pro-abortion talking points, but also crude ones. Others included smiley faces in their answers and separated the head of the cookie from the rest.

Live Action News recently reported on the incident, which was shared on Facebook by blogger Matt Walsh, who had strong words regarding the depravity of such students.

Georgia Right to Life also spoke of a peaceful pro-life presence in reaction to this kind of tabling event.

The Skeptics Society addressed the responses on their Facebook page, noting that the students had the right to write such responses, as the club “promotes free speech and discussion.” Even more bizarre, the statement claimed that using cookies was “the least graphic way” to engage in the event. One has to wonder though why they needed to eat cookies shaped like preborn children? Why not regular cookies?

According to the group’s Facebook page, its mission “is to seek to engage in collaborative conversation and critical thought through the spread of secular tolerance.” The page also notes that “this group is not only religious discussion, but critical debate over a variety of topics in order to engage members in skeptical thinking.”

It’s not clear though how writing such crude responses, smiley faces, and separating the head of a cookie representing a preborn child will contribute to discussion, debate or thinking.

What’s worse is that the club is not even an inherently pro-abortion group, or at least it shouldn’t be. It’s a club for secularists, a demographic which does include pro-lifers as well.

Kelsey Hazzard of Secular Pro-Life expressed concern to Red Alert Politics about the mentality the Skeptics Society was furthering:

This incident will no doubt contribute to the popular perception of secular people as anti-child, which is a shame. The truth is that non-religious Americans are incredibly diverse, and millions of us acknowledge the humanity of children in the womb.

I can only imagine that the respondent who answered “abortion should be legal because” with “my vagina is too pretty to let a fetus crawl out” is not one who is willing to engage in a civil discussion with a pro-lifer.

I would tell her though that I agree on one thing about the female reproductive system. We can still love and appreciate our bodies without having to sacrifice our preborn children though. And, I would like to remind her that what makes our bodies so “pretty” and wonderful is because of the powerful utility. We can give birth to our children and continue to do amazing things. That’s what makes childbirth so empowering.

There are also forms of abortion which do involve efforts similar to childbirth in order to remove the dead child. This includes a medication abortion, which the FDA now has said women can use up to 10 weeks for, in a move that may have been done for political reasons. A woman doesn’t just experience period cramps or bleeding, as pro-aborts would like her to believe. Rather she goes through contradictions to push the child out, usually while sitting on the toilet. Dr. Anthony Levatino, a former abortionist, describes the procedure below.

And, if a woman has a late-term abortion, she still has to give birth to her dead baby, going through the similar process as if he or she were to be born alive.

The University of North Georgia isn’t the only place where people don’t seem to want to have a conversation though, sadly.

Although non-students and members of the press were strictly controlled and kept out of the lecture hall, I visited Georgetown University on April 20, the day Planned Parenthood CEO and president Cecile Richards spoke on campus.

The pro-life students and other pro-life groups making their presence known, such as Students for Life of America and Tradition, Family, Property (TFP) spoke about how they wanted to have conversations with people and discuss the issue, even if it was just to agree to disagree.

What I overheard were students writing off TFP because it was compromised of men and scoffing at pro-life efforts as offensive to women who have had abortion. Those who did try to approach the pro-life students tabling spoke with a tone as they fired away questions and walked away in disgust.

Cecile Richards herself also laughed at, scoffed at, and danced around questions she was asked by respectful pro-life students who were brave enough not only to attend, but to ask questions and live tweet the event.

I commend those students who try to peacefully and lovingly engage with the pro-abortion movement for the sake of civil discussion and debate. It’s not easy to have conversations with people who shut you down, mock you, and who don’t even want to have a conversation when they pull out the most outrageous methods imaginable.

But, that’s why it’s so much more important to be on the side of not just truth and love, but of reason and calm. It makes it that much more worth it in the end when we are able to get through, not for ourselves or even for our movement, but for mothers and their children.