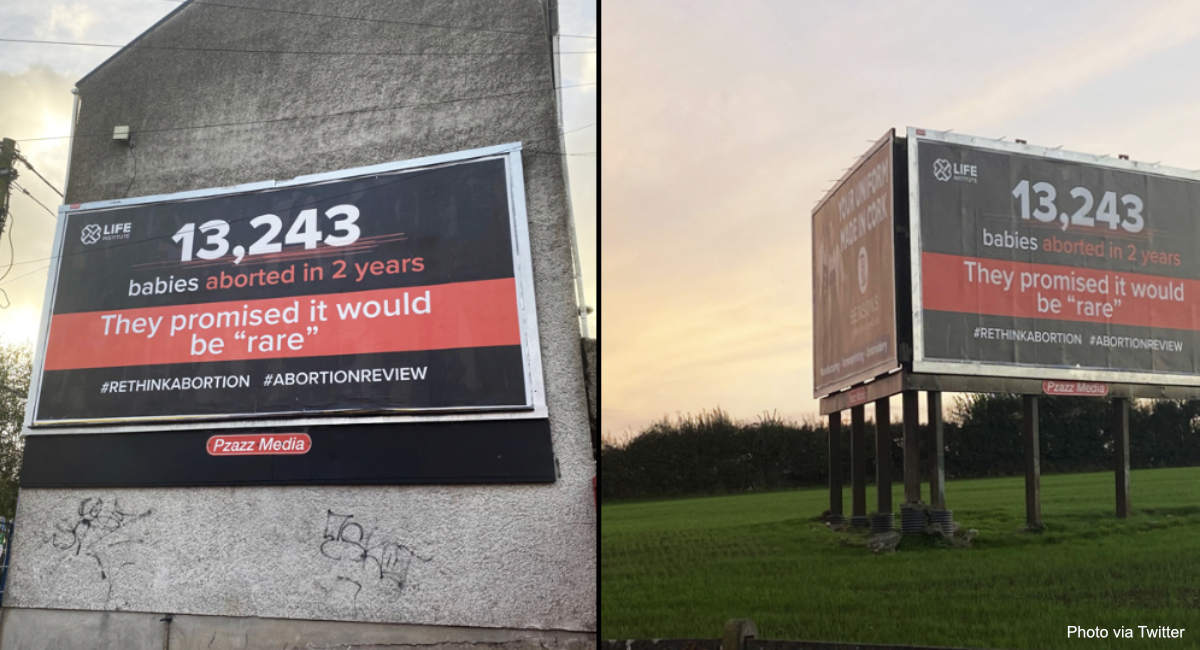 A pro-life billboard campaign urging people to #RethinkAbortion is alerting the public in Ireland to startling statistics on abortion in the three years since its legalization. Life Institute and Iona Institute, two Irish pro-life organizations, have placed billboards throughout the country to raise awareness as the country’s legislature undertakes a three year review of the 2018 law that allows abortion for any reason up through 12 weeks gestation.

The #RethinkAbortion campaign is specifically drawing attention to the broken promises made by abortion advocates, who claimed that abortion would remain rare in Ireland. The statistics from 2019 and 2020 prove that abortions are far from rare. According to the Life Institute, the 6,666 abortions committed in 2019 were “more than double the number of abortions which had been carried out on 2,879 women who travelled to Britain for the procedure in 2018,” and “An unknown number of women, estimated by some at 1,000 or more, also took abortion pills in 2018.”

READ: In the face of hostility, pro-life activists continue to protest legalized abortion in Ireland

The occurrence of late-term abortions, as well as the case of a baby boy tragically aborted after his parents were mistakenly told that he had Trisomy 18, all further belie claims abortion activists made while the law was being debated. Reportedly, abortion advocates are now pushing to get rid of the three-day reflection period, which saved the lives of some 870 babies after their mothers changed their minds following their initial abortion consultations.

One version of the billboard reads,”13,243 babies aborted in 2 years. They promised it would be ‘rare.'” Other billboards note that the number of babies aborted in 2019 and 2020 is greater than the population of whole Irish cities, like Santry, Arklow, Crumlin, and Shannon. The billboards are being run in conjunction with door to door leafleting and social media messaging, and were complemented by an October 20th rally sponsored by the Life Institute.

We’re thankful for the brave, committed and unwavering pro-life politicians who continue to be a voice for Ireland’s preborn babies.

“Making abortion legal has certainly made it much more frequent,” the Life Institute’s Niamh Uí Bhriain commented. “Despite the lockdown in 2020, another 6,577 abortions took place, adding up to a grim total of 13,243 in just two years. Yet the government has given no indication that they would like to act to reduce this number or offer better options to women. Instead, we have abortion campaigners demanding changes which would further increase the number of babies aborted, such as scrapping the three-day reflection period.”

Uí Bhriain continued, “Why would anyone want to scrap a measure which helps to reduce the number of abortions? Instead the review should be focused on introducing changes which can help women make positive choices, such as funding pregnancy support agencies, offering better support to single parents, and promoting a positive culture for mothers.”

Pro-abortion legislators, such as Holly Cairns, have urged Ireland’s Minister for Health to ban the billboards, claiming that they are misleading. “[T]he obvious implication of this is that abortion is now more prevalent in Ireland following Repeal and the enactment of abortion legislation,” Cairns told the Irish Examiner. “The fact is, we have never had a reliable figure for the number of abortions in Ireland as it was never legal here and women had to travel. The only jurisdiction we had figures for was the UK — and those figures were unreliable as they were dependent on Irish women in UK clinics giving an Irish address, so they would be captured in statistics.”