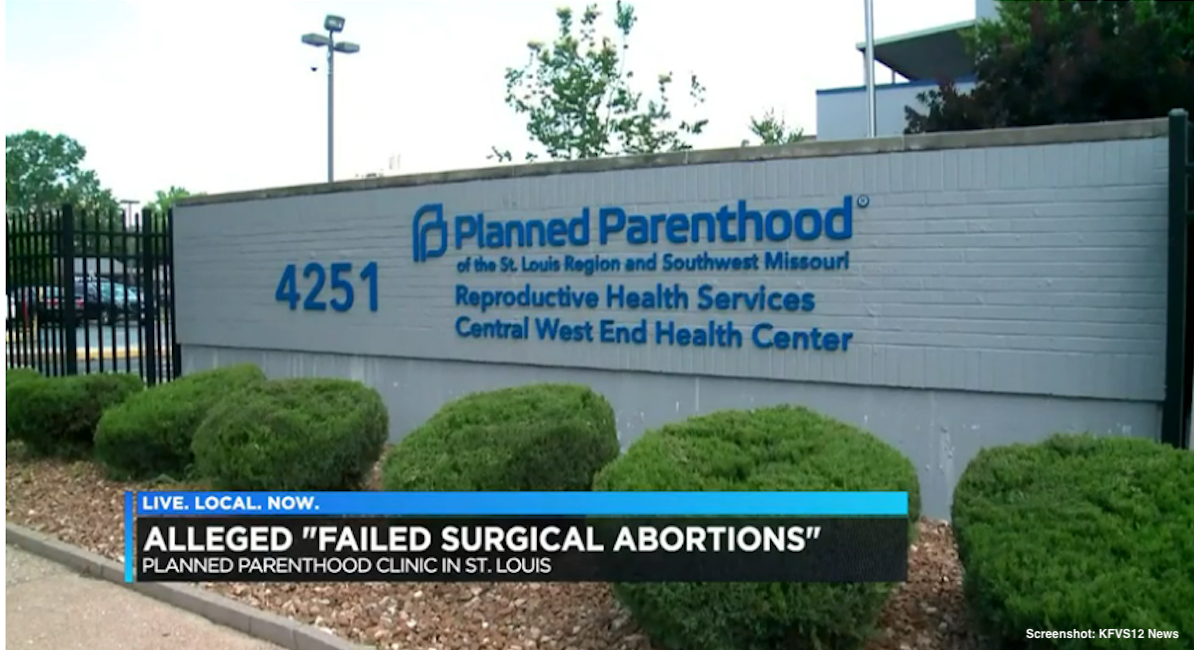 A Planned Parenthood laboratory recently cited for its handling of the remains of aborted children could hold the key as to why the state of Missouri has refused to grant a license to the only abortion facility in the state. According to a news release from the Missouri Department of Health and Senior Services (DHSS), a March 2019 inspection of Reproductive Health Services of Planned Parenthood of the St. Louis Region “identified serious concerns, one of those involving the handling of fetal tissue extracted from abortions.” In a nutshell, there have been reports of “multiple” failed abortions at the facility, including one particular botched abortion caught during an inspection. A deficiency report revealed that “patient A” suffered an incomplete abortion and for five weeks carried the partial remains of her aborted child in her womb until a second abortion was committed. This was just one reason why the state refused to renew Planned Parenthood’s license.

Witnesses outside the Planned Parenthood facility have documented 74 medical emergencies at that location in the past ten years. When the media questioned the facility’s medical director, David Eisenberg, he claimed, “[O]ur rate at which our patients having abortion care need emergent transfer to the hospital is lower than the national standards.” However, he couldn’t identify that rate, saying, “I don’t know what that number is, and I can get back to you with that.”

The DHSS notes, “Specifically, the investigation was undertaken to determine why women remained pregnant after the abortion provider and the laboratory confirmed the presence of fetal parts and tissue in the post-surgical abortion pathological examination.” Retained fetal parts or retain portions of the placenta can lead to serious, even potentially fatal, consequences. The report continues:

A failed surgical abortion–a very rare complication–in which a woman remains pregnant after a surgical procedure, can usually be detected by the examination of fetal tissue confirming the abortion was performed both by the physician performing the abortion and pathological examination by an accredited laboratory. State law and standard of care require the physician to grossly examine tissue at the time of the procedure.

Missouri Governor Mike Parson stated in a recent press conference that Planned Parenthood refused to allow their abortionists to speak with state investigators about the failed abortions. He noted that on April 11, the DHHS requested, in writing, interviews with Planned Parenthood’s seven abortionists at the location. On April 16, a PP attorney told DHHS PP wasn’t obligated to make its abortionists available for those interviews . Gov. Parson noted that two of the physicians, however, were willing to meet, and stated that the following concerns needed to be addressed prior to any license renewal:

“No judge should give special treatment to PP in this instance,” Parson said. “If you break the law, there are serious consequences. If you don’t provide a standard of care that ensures the safety of women you shouldn’t be allowed to operate, its that simple.”

However, despite the State’s concerns, as Live Action News previously reported, “Circuit Judge Michael Stelzer threw out the subpoenas… for four abortionists who have worked at the unsafe Reproductive Health Services Planned Parenthood.”

“The findings at Planned Parenthood’s contracted laboratory contributed to adverse patient outcomes,” said Dr. Randall Williams, director of DHSS. According to the release, the DHHS “referred its findings to the Centers for Medicare & Medicaid Services (CMS), the proper federal investigative authority,” and an “immediate investigation ensued” into Boyce and Bynum Professional Services’ processes. Since the lab cooperated with the investigation, its “accreditation was restored with the College of American Pathologists.”

Further inquiry as to why failed surgical abortions occurred without the patient knowing that she was still pregnant led to an investigation that at this point in time discovered deficiencies in the contracted laboratory’s processes related to the examination of fetal tissue. The investigation into additional reasons for this is ongoing but has been limited by the refusal of Planned Parenthood providers who performed the abortions to be interviewed.

As more information becomes available, further reports and/or updates will be made.

Editor’s Note 6/11/2019: Added information on the deficiency report regarding “patient A.”