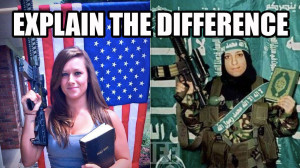 I’ve long been struck by how the temperament and tactics of “respectable” pro-abortion blogs is virtually indistinguishable from the sheer lunacy of fringe, conspiratorial hate sites. And a truly demented editorial by RH Reality Check Senior Political Reporter Andrea Grimes proves that it’s not just disgruntled commenters; the writers and editors themselves are the source of the madness.

When you first see her headline, “Stop Calling U.S. Lawmakers the ‘Taliban,’” you might assume Ms. Grimes has taken a long-overdue stand against one of her side’s worst exaggerations. Surely it’s not too much to ask that reasonable pro-choicers admit there’s no equivalence between people who disagree with them on abortion and a notorious terrorist regime?

Amazingly, even that modest hope turns out to be in vain. You see, Andrea Grimes doesn’t care that “American Taliban” is a vile, asinine slur against millions of pro-lifers who wouldn’t throw a punch much less fathom any of the Taliban’s crimes. No, she frets that it’s insulting…to Muslims:

These phrases aren’t clever, and they aren’t insightful. They’re racist, and they’re Islamophobic, and people—especially white people—who work in social justice movements and who do advocacy for women’s rights need to stop using them yesterday.

This couldn’t be more insane. The truly awful aspect of “American Taliban” gets a pass while the unquestionably valid part gets a five-alarm freakout:

It’s no accident that, in the vast and varied religio-cultural landscape of planet Earth, which offers no shortage of examples of misogynist ideologies, Americans choose “Taliban” when they want to try and insult right-wing lawmakers, and try to incite their fellow citizens to action against those lawmakers. Because 9/11. Because the war in Iraq. Because racism. Because brown people from the Middle East are, more than any other people, the “baddies” right now in American culture.

Or it could be, y’know, that the Taliban is a real-world group comprised of real-life theocrats who practice actual oppression. What it evokes are not myths or stereotypes, but atrocities that were really carried out by people…pay attention here…called the Taliban.

“Muslim” and “Taliban” are no more interchangeable than “German” and “Nazi,” “African American” and “Black Panther,” or “Democrat” and “Ku Klux Klan.” In fact, Grimes’ position would come as a shock to Muslims themselves, considering those living under their rule or in their crosshairs were the Taliban’s primary victims.

I also see another side to the “American Taliban” rhetoric, one that’s not just racist and Islamophobic but misogynist, one that is about a certain kind of fetishization of the oppression of women of color, about the kind of subconscious work a phrase like “American Taliban” or “Texas Taliban” does for white people: it titillates us, allowing us to imagine ourselves as beneficent saviors of brown-skinned damsels in distress.

Uh, Andrea? “Fetishization of the oppression of [Insert Minority Here]” and “titillating savior fantasy” describe to a T the mission of the modern pseudo-feminist movement, RH Reality Check, and half of your own column. Years of covering content like this has taught me to imagine quite a bit, but the idea that nobody in this article’s review process noticed the irony is stretching my suspension of disbelief to the breaking point.

We can imagine that woman being oppressed in the way we expect her to be oppressed, and imagine ourselves—Americans wielding lipstick and high heels—as liberators. As if beauty products and fashionable shoes were unknown to Muslim women, and as if wearing lipstick got us government-mandated parental leave, and high heels have earned American women equal pay for equal work.

I have no idea how far down the rabbit hole you have to go to hallucinate subtexts this convoluted. Frankly, the only thing keeping this from being the month’s craziest attempt to find nonexistent bigotry is that it happened to drop the day after a column about the secret racist messages in Thomas the Tank Engine.

So…she’s saying her fellow pro-choicers are racist? Kinda kneecaps their moral authority to lecture us about our own alleged prejudices, though I doubt Grimes thought that far ahead.

There’s no need to try and incite fear that right-wing lawmakers are going to turn America into an extremist Islamic theocracy when they’re doing just fine turning it into an extremist Christian theocracy […] We need to ask ourselves: What’s wrong with our own American Christianity that we are unable to face the very real fact that we are perfectly capable of using our own Christian traditions to oppress the most vulnerable among us?

What’s wrong with our own American pro-choice movement that we are unable to face the very real fact that we are perfectly capable of using scientific evidence, not Christian dogma, to protect the most vulnerable among us?

People know what they’re doing when they say “Texas Taliban” or “American Taliban.” Everybody else does, too. That’s why they say it in the first place: They want to make clear that when American lawmakers are bad, they’re imitating brown men on the other side of the world, where the “real” oppression happens. The word “Taliban” conjures up images of brown men wearing turbans, and brown women wearing burkas. Nevermind the fact that white, male Americans are doing just fine at oppressing women with bibles at their right hand.

I cannot imagine reading a more complete, more self-centered, more embarrassing lack of perspective within the next year. Prohibiting abortions, tightening medical regulations, and respecting Americans’ right to choose what they subsidize constitute “extremist Christian theocracy” on par with what you’d find in the Middle East. Grimes even goes out of her way to mock criticism of the comparison by putting scare quotes in “where the ‘real’ oppression happens.”

This is just a sampling of the hell the Taliban put millions of people through. What real patriarchy, real misogyny, real oppression, real theocracy, real homophobia, real morality police, and a real War on Women look like. What it’s really like to live without choice or privacy.

Andrea, why don’t you do a Google Image Search for “Taliban victims” and get back to us on whether the results remind you of a pro-life demonstration?

To have delusional, hate-filled narcissists cry oppression at resistance to their greedy, domineering agenda is akin to five-year-olds screaming that having to clean up their room is torture. The only difference is, five-year-olds at least have the excuse of not knowing anything about genuine torture.

Well, the five-year-olds who didn’t grow up under the real Taliban, anyway.

The difference between Islamofascist tyranny and pro-lifers’ peaceful campaign to save the unborn and defend religious liberty isn’t complicated. There is no reasonable, sincere case to be made that they’re in the same moral universe—least of all from those in favor of shedding innocent blood.

Any honorable writer would never type such dreck. Any ethical website would be embarrassed to publish it. And any rational reader would be appalled to see it written on behalf of a common cause. But the pro-abortion movement is none of the above. Tellingly, none of the article’s almost fifty comments express discomfort with the slander, but most of them hysterically defend their use of “American Taliban.”

Andrea Grimes has inadvertently done the pro-life movement a great service by proving that she, RHRC, and the community they serve represent unadulterated fanaticism—animated by ego, dismissive to facts, and united in hate.