Indiana Right to Life has discovered that $200 human brains from aborted babies were purchased by Indiana University (IU) in May 2016. Part of the reason IU opposed statewide abortion restrictions and sued the state of Indiana was because IU wanted to continue its purchases of aborted baby body parts. Back then, IU said that a new Indiana abortion law would hinder necessary medical research.

The Indy Star reported in May:

IU said the new law…is vague and “will institute sweeping and unconstitutional prohibitions.” The impact on IU’s neuroscience research, according to the university’s seven-page complaint, could be “dramatic” and “catastrophic.”

IU’s Stark Neurosciences Research Institute uses aborted or miscarried fetal tissue in conducting research into conditions such as autism and Alzheimer’s disease. The university acquires fetal tissue from the Birth Defects Research Laboratory at the University of Washington. In its complaint, filed in U.S. District Court in September 2016, IU acknowledges it is aware that it is buying the parts of aborted babies: “The U. Wa. Lab advises that fetal tissue is obtained from both elective abortions and miscarriages.”

Now Indiana Right to Life has verified the purchases are true — as evidenced in this invoice from the University of Washington. 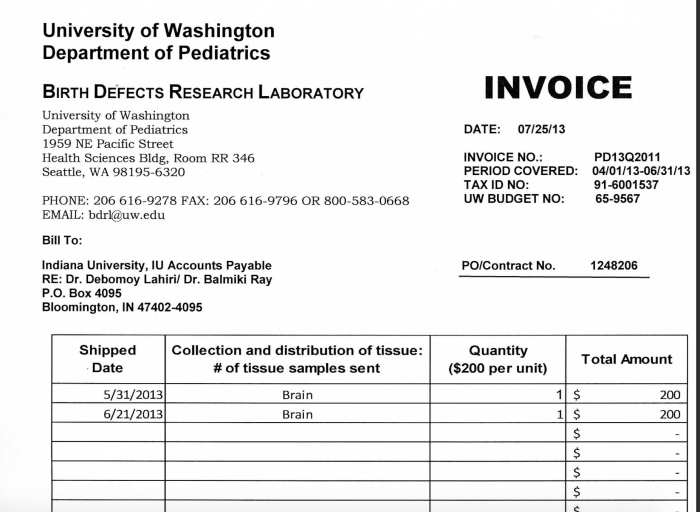 Despite the invoice showing $200 per brain, IU has taken to Twitter to debate its purchases, claiming any purchase it has made is merely to pay for “shipping/handling to obtain very small amounts (less than ¼ ounce) of these tissue samples.”

IU is not the first university to be embroiled in a baby parts scandal. In June 2016, it was discovered that the University of New Mexico used baby brains from an abortion clinic at a youth summer camp.

Indiana University is suing over a portion of the 2016 Dignity for the Unborn law, which prohibits the transfer and sale of aborted baby parts. Indiana University claims in its lawsuit that the law will jeopardize research.

Each aborted baby’s brain being dissected by Indiana University researchers belonged to a little boy or girl. We’re sickened that a price tag of $200 was put on the brain of a deceased child whose life was ended in the barbaric practice of abortion. We urge the Indiana University Board of Trustees to step up and put a stop to the experiments on aborted babies.

IU’s main complaint in their lawsuit against the state of Indiana appears that professors want to continue to use fetal tissue derived from aborted babies in their laboratories and experiments. IU’s complaint makes vague statements about the need for the research, as well as the oft-cited but unproven claim that they will not be able to hire research faculty if the prohibition remains in effect. However, IU’s claims lack any substantive proofs that the research use of aborted fetal tissue is critical or unique.

IU still insists that their medical research on aborted babies is vital. Besides, the university asserted in May, if they had to stop, they would have to refund a lot of money. The Indy Star reported:

Dr. Debomoy Lahiri, an IU psychiatry professor and a primary investigator for the research institute, is involved in multiple research projects and educational initiatives, including a federally funded Alzheimer’s disease center, according to the complaint.

The complaint states that Lahiri is required to share samples with the National Institutes of Health…Not doing so would severely limit Lahiri’s eligibility for federal funding, the complaint states, and the university may have to refund millions of dollars in existing research grants.

The Star reports that Dr. Lahiri, as well as IU’s board of trustees, IU’s vice president for research, Fred Cate, and the research institute’s executive director, Bruce Lamb, were all named as plaintiffs on the lawsuit.

Lahiri’s work certainly demonstrates his use of fetal brains and why he doesn’t want to lose access to the brains, as evidenced by his research interests and this study: 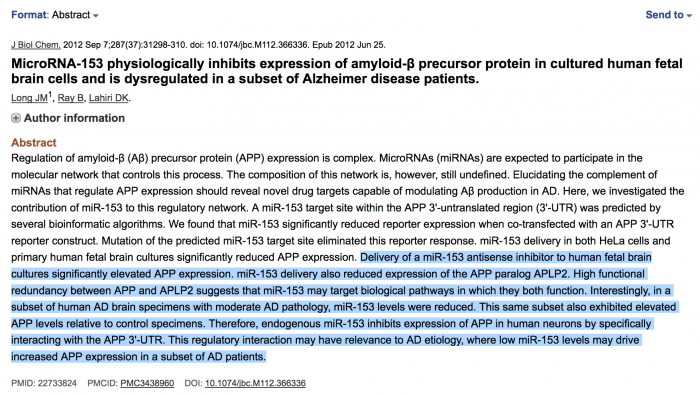 Indiana Right to Life is hoping that its petition will move the board of trustees to suspend such unethical activities, especially since potential cures for diseases have been found not from fetal research but, instead, from adult stem cells. The petition notes this reality, saying, “Let’s find cures for diseases using the promising avenues of adult stem cells and umbilical cord blood, not by experiments using organs harvested from aborted babies.”