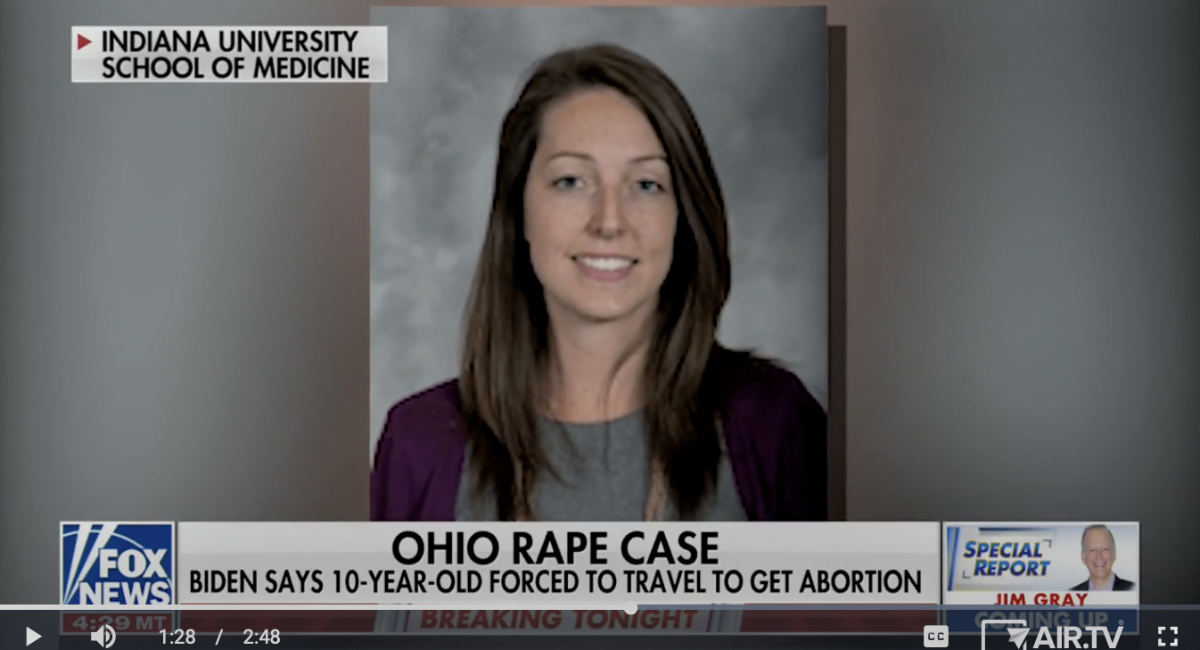 UPDATE, 7/15/22, 9:50a EST: In an e-mailed statement to Live Action News, Indiana University Health said Dr. Caitlin Bernard has been investigated and cleared of any potential privacy violations.

UPDATE, 7/14/22, 11:22p EST: An update from Fox News states that the media outlet obtained records showing that Dr. Caitlin Bernard did file a report with authorities regarding the 10-year-old rape victim on July 2 — one day after the media published a story about the girl with information they had received from Bernard.

In addition, Telemundo published a video, below, showing a reporter who tracked down the child’s mother. The mother is heard to state on the video that the child is “fine” and that “everything they say about [Gerson Fuentes, misnamed in the tweet below] is a lie.”

WATCH: The mother of the Ohio 10/y rape victim tells Telemundo's @MariaVargasPion that the child "is fine", and "everything they say about (Gerson Flores) is a lie." pic.twitter.com/Vtpyn404g7

7/14/22: Caitlin Bernard, the Indiana abortionist who told the media about a 10-year-old girl who had been raped in Ohio, is now under investigation. Authorities are seeking to learn whether Bernard reported the rape as required by law. Bernard is also now facing a HIPAA violation charge from her employer, Indiana University Health.

Indiana Attorney General Todd Rokita appeared on Fox News, where he stated that his office is investigating whether or not Bernard reported the rape as legally required. “[W]e have the rape,” he said. “And then we have this abortion activist acting as a doctor with a history of failing to report. So we’re gathering the information. We’re gathering the evidence as we speak, and we’re going to fight this to the end, including looking at her licensure. If she failed to report it in Indiana, it’s a crime for – to not report, to intentionally not report.”

Bernard is one of several Indiana abortionists with a history of neglecting to report the sexual abuse of children. Bernard was part of a group of nine abortionists received numerous consumer complaints for failing to report abuse 48 times — and some of the victims were as young as 12.

According to RAINN, under Indiana law any person who suspects a child is a victim of sexual abuse or rape is required to make an oral report immediately. A written report must be issued within 48 hours, and a medical provider is also required to take photographs of any visible signs of abuse. If someone knowingly neglects to make a report, they can be found guilty of a Class B misdemeanor.

Additionally, Bernard’s employer, Indiana University Health, has filed a HIPAA violation against her, according to Fox News. “The doctor that was in charge of caring for her is facing repercussions for this story getting out the way that it did,” Fox News reporter Aishah Hasnie said, adding, “That doctor is Caitlin Bernard, and she was at an abortion rights rally talking about the situation involving the young girl. And we’ve learned tonight from a source that her employer has filed a HIPAA violation against her for sharing details about the young patient.”

The timeline of the incident raised questions about Bernard’s priorities, one of which seemed to be getting the story to the media as quickly as possible. According to NBC4, the girl received a consultation for the abortion on June 29, and underwent a “medical abortion” on June 30. Questions about the particulars of the case remain.

The Indianapolis Star published its story about the incident at 5:00 a.m. on July 1 — the very next day. This would only have been possible if Bernard had immediately notified the media. What is not known at all is how the girl and her mother feel about their story being international news, even discussed by President Biden. Did they give their consent for Bernard to share their story?

Dr. Bernard has remained silent to virtually all inquiries since leaking the information to the press.