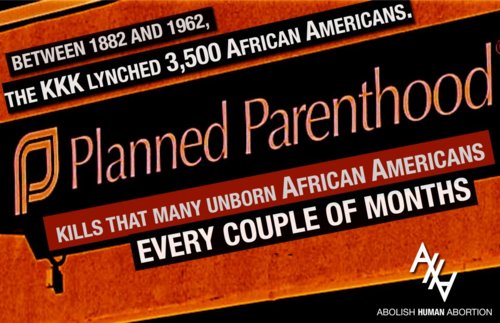 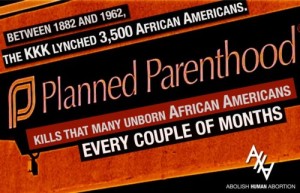 Juxtaposing the things that do and don’t offend pro-aborts never ceases to sicken. It recently came to light that E.W. Jackson, the Republican candidate for lieutenant governor of Virginia, once said the following:

It is time to end the slavish devotion to the Democrat party. They have insulted us, used us, and manipulated us. They have saturated the black community with ridiculous lies[.] … The Democrat party has created an unholy alliance between certain so-called civil rights leaders and Planned Parenthood, which has killed unborn black babies by the tens of millions. Planned Parenthood has been far more lethal to black lives than the KKK ever was. And the Democrat party and their black civil rights allies are partners in this genocide.

That was more than enough to rile up RH Reality Check’s Wagatwe Wanjuki:

I was shocked that someone could seriously compare an organization that offers legal, life-saving health services to an organization with historical ties to criminal activity responsible for the terrorism, torture, and murder of many innocent people[.] … How, pray tell, is allowing low-income women of color non-judgmental access to birth control more dangerous than a group of terrorists who would burn a cross on my lawn?

As usual, she can make it sound shocking only by purposefully omitting the major Planned Parenthood service that makes the organization controversial in the first place: executing and disposing of innocent, living babies for mothers who don’t want to treat them like full human beings.

If we inject actual facts into the discussion, the shock gets flipped 180 degrees. The Tuskegee Institute estimates that between 1882 and 1968, the Klan was responsible for the deaths of 3,446 blacks. As Issues4Life Foundation president Walter Hoye notes, the Guttmacher Institute’s own figures indicate that 432,000 black babies were aborted in 2008 alone – making Jackson’s statement objectively, indisputably true. The KKK were pikers compared to PP.

Oh, and as for the legitimate pregnancy services Planned Parenthood offers (which are a smaller slice of the pie than advertised), it’s worth noting that throughout history, the Klan dabbled in its share of non-racist activities for PR purposes too, from helping the widows and orphans of Confederate soldiers to handing out sandwiches and other goods to the poor. Along similar lines, in 2002, Democrat Sen. Patty Murray made headlines for noting that Osama bin Laden won poor people’s favor in Middle Eastern countries in part by bribing them with schools, roads, and daycares. The point is that we shouldn’t be fooled when evil organizations do good deeds for their own strategic and propaganda benefit.

Non-abusive relationships can be difficult enough when there are issues such as pregnancy, children, and finances involved. Adding abuse to the equation makes it particularly dangerous; in fact, the leading cause of death of pregnant women is murder by their partner. Years later, I often think about how thankful I am that I never got pregnant during my abusive relationships—thanks to Planned Parenthood.

Planned Parenthood allowed me to have access to affordable (and often free) contraception while I was underemployed and/or a student with a very limited income. It was a place where I could go and be treated like a human being. While I could not control what sort of treatment I may be subjected to in my relationships, I was so happy that I was able to control my own body.

Actually, Carrie Lukas dug into that statistic and found it highly dubious, and since Wanjuki has opened the door, let’s not forget that abortion can be a useful tool for abusive partners, nor the Planned Parenthoods that have been exposed for negligence and/or complicity in the abuse and exploitation of women and girls.

Hey, all this talk of the non-judgmental ease with which they help kill your kids calls to mind yet another parallel to the past plight of black men and women in America. According to the South Carolina Slave Code, for instance, “Willfull [sic] murder of a slave was punished by a fine of 700 pounds. Killing a slave ‘on a sudden heat of passion’ resulted in a fine of 350 pounds.” As pitiful a slap on the wrist as that was, it was something, which is more than the absolute dominion over unborn life Planned Parenthood champions. Ever so slightly, the old South actually treated slaves better than liberals treat babies today.

The only thing that isn’t shocking is which side of the aisle this cancer comes from. If any major political party was to become the party of abortion, of course it would be the party of slavery and segregation.