The League filed the complaint in October 2018 after learning that Backardjiev had failed to disclose to the Board that he was under discipline in Texas.

That disciplinary action stemmed from an incident in December 2013, when, as an ob/gyn, Backardjiev used forceps to forcefully deliver baby Olivia Coats against the wishes of her mother, Rachel Melancon. His actions fractured Olivia’s skull and caused brain hemorrhaging, which in turn led to multiple organ failure. Four days later, little Olivia was dead.

Melancon filed a wrongful death lawsuit, and in August 2016, she was awarded more than $10 million in damages. Two days later, the Texas Medical Board filed a formal complaint against Backardjiev, after which he was no longer allowed to practice medicine in Texas.  Rather than seek to clear his name, Backardjiev fled the state and settled full-time in Illinois, where he had also been licensed. His Illinois medical license expired and was renewed in July 2017, but Backardjiev did not report the discipline against his Texas license, even though he was legally obliged to do so.

In response to a 2018 Freedom of Information Act request, the Pro-Life Action League learned that Backardjiev was employed by the Aanchor abortion facility in Glen Ellyn, Illinois: 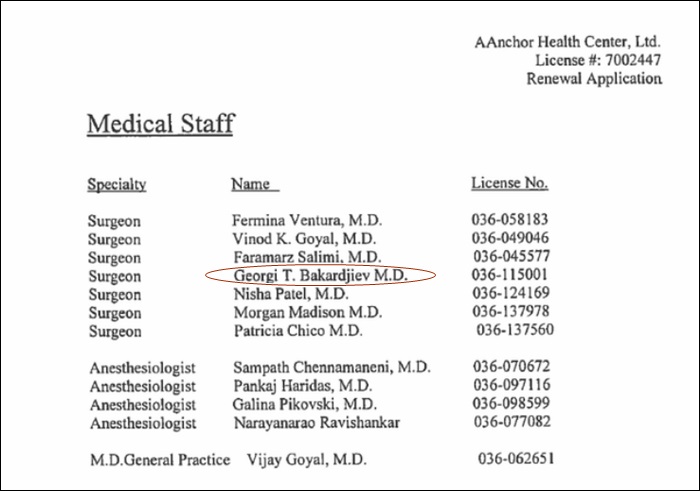 After unearthing this information, the League filed a complaint against Backardjiev with the Illinois Medical Board, which has since placed his license under suspension:

Backardjiev is the latest example of why the abortion industry simply cannot be trusted to police itself. If we as pro-lifers don’t keep an eye on them, who will?

Editor’s Note: This article was published at Pro-Life Action League and is reprinted here with permission.