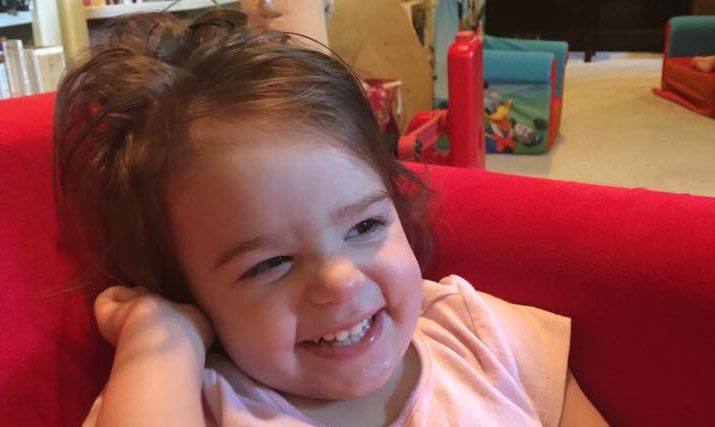 In February 2016, two-year-old Eden Carlson fell into the family swimming pool and nearly drowned. Without a heartbeat for two hours, she suffered significant brain damage, and doctors ultimately gave her 48 hours or less to live. Over a year later, however, Eden is nearly back to normal.

After managing to get through the gate, little Eden was in the 41 degrees Fahrenheit water for 15 minutes before she was found. She had no pulse and was not breathing. Her mother performed CPR for 10 minutes until the ambulance arrived. EMTs performed CPR for another 30 minutes, and once she arrived at the hospital, CPR was performed for another 65 minutes. She received blood, fluids, and 17 EPI shots to get a heartbeat before she was finally resuscitated. Eden was alive but major organs weren’t working and she was unresponsive. Doctors believed she had significant brain damage and felt there was nothing they could do for her. She was given just hours to live.

But Eden overcame the obstacles and survived. One month after the near-drowning, Eden was still alive, although she remained unresponsive and immobile. MRI scans showed extensive damage to the grey matter in her brain and she had lost both grey and white matter. Doctors told her parents that she would never walk, talk, or eat normally again. They said she had no brain activity and would remain in a vegetative state. After five weeks in the hospital, Eden was sent home with zero hope of a recovery.

But rather than give up on Eden, her family found a way to help her. They researched on the internet until they found Dr. Paul Harch, who had an experimental treatment that could help. Three weeks after she went home, researchers at LSU Health New Orleans School of Medicine and the University of North Dakota School of Medicine began to treat Eden with oxygen therapy.

According to a case report published in Medical Gas Research, the oxygen therapy Eden received included normobaric oxygen therapy (oxygen levels are the equivalent of oxygen at sea level). She began this 55 days after her accident and doctors noticed within hours of her treatment she became more aware and began to move her arms and hands. She also began to speak a little and laugh.

78 days after the accident, Eden began hyperbaric oxygen therapy (pure oxygen at pressures higher than in the atmosphere). After just ten sessions, Eden had near normal motor function. Doctors added physical therapy to her treatments and she was eventually able to walk and her speech returned to normal. Her motor function was near normal as well. In addition, the hyperbaric oxygen therapy helped to reverse atrophy and restore the lost grey and white matter.

“She had lost grey matter and white matter and usually they continue along that line of atrophy and more shrinkage. After she had had the treatment here and the supplemental oxygen, we repeated the MRI at home and we were shocked,” Dr. Harch told HLN. “All of this tissue was regrown in this setting and it has never been seen before.”

“We’ve seen miracles before our very eyes with our little daughter going through this therapy and we’re just so grateful that she’s been restored and that she will lead a normal life,” said her mother Kristal Carlson.

Carlson said Eden is still learning to walk and is still a bit shaky, but she improves with each treatment. She will continue to receive the treatments for as long as they help her.

“He’s given us so much,” said Carlson of Dr. Harch. “We’re just so grateful for his research and his courage and treating brain injuries this way so that we were given the opportunity to seek after this ourselves.”