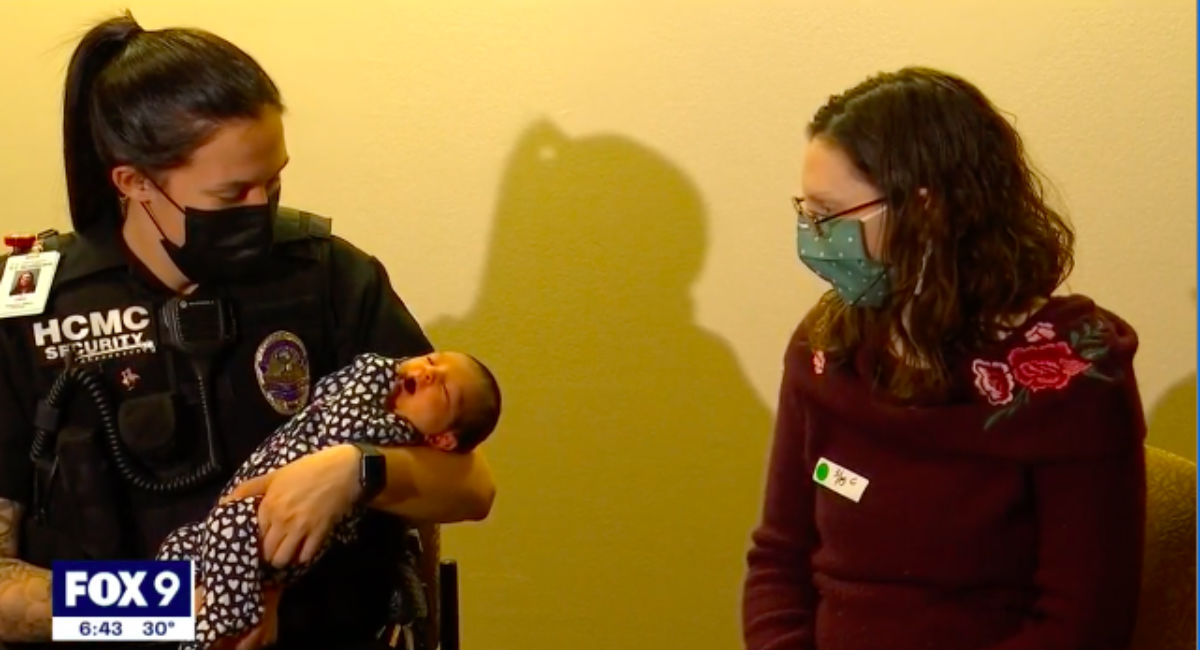 On March 8, a brave Minneapolis hospital security officer helped bring a new baby into the world when her mother didn’t make it through the emergency room doors. Lacey and Luis Gonzalez’s fourth child, a daughter, wasn’t due for another week when Lacey went into labor.

“What was probably less than a 10-minute drive felt like forever, just trying to go a few miles… I remember the whole ride, my husband kept saying ‘the water hasn’t broke yet. We’re gonna be OK. We’ll make it. We’ll make it.” However, things took a turn as Lacey’s water broke just as the couple was arriving at the hospital’s emergency room drop-off zone. Lacey recalled, “The second we pulled up to the emergency doors, she decided to start entering the world!”

Security officer Tiffany Owens was the first person Lacey’s frantic husband Luis met when he ran through the emergency room doors in search of help. She remembered, “I asked him the same question that I ask every labor patient that comes in, ‘are they actively pushing?’ And this one time, he said yes.” Officer Owens sprang into action, running out to the van to assist Lacey.

By the time Officer Owens, a mom of one daughter herself, got to Lacey, “I saw [the baby’s] head sticking out about an inch. And I just kept telling her to keep breathing, that it was going to be okay. Keep pushing.” A few moments later, the baby girl was out.

Lacey had nothing but gratitude for Officer Owens. “She came to the rescue and the whole time I just kept looking at her eyes, and all I could see was courage. I knew that everything was going to be okay.” Since the Gonzalezes did not know the baby’s sex ahead of time, Officer Owens was the first person to find out that the baby was a girl. After the delivery, Luis was able to cut her umbilical cord and both mother and baby were admitted to the hospital’s birth center. Both are now doing well.

Ultimately, the Gonzalezes opted to name their little girl after the heroine officer who helped deliver her. Providentially, the name Tiffany means “manifestation of God,” according to Lacey Gonzalez.

Kathryn Leggitt, a certified nurse-midwife at the hospital, commended Officer Owens’ drawing on her professional training about how to handle an emergency delivery outside a hospital setting, as well as her personal labor and delivery experience with her own daughter, saying “Pulling all those things together, she made a really safe experience for Lacey and for the baby.”

For her part, Officer Owens called the delivery “one of the most amazing moments of my life — still trying to understand what happened a week ago.”

In December of 2020, Live Action News reported on another emergency delivery, when an Oklahoma baby was born with the help of a heroic nurse inside a hospital parking deck. Similarly, in June of 2020, a baby girl was born in a Florida hospital’s parking garage. Examples like these and that of Baby Tiffany Gonzalez give a whole new meaning to exciting birth stories.