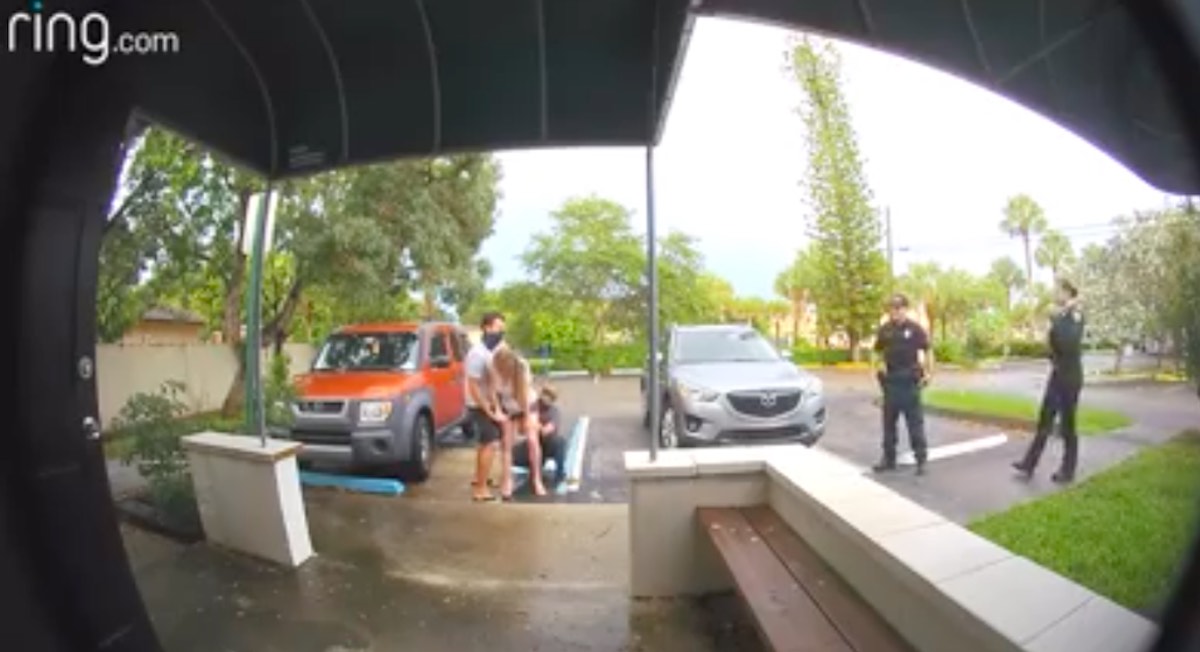 A normal Friday quickly became the birthday of little Julia Anderson, who just couldn’t wait to see the world. Julia’s parents, Susan and Joseph Anderson, didn’t quite make it inside the Natural BirthWorks Center in Margate, Florida. Instead, Susan gave birth standing up in the parking lot of the center.

“During the car ride to the birth center, I turned to my husband, and I was like, ‘I need to push!’” Susan told Local 10. “I didn’t think I wouldn’t make it into the building.” Susan had planned to have a water birth inside the birthing center. “That was my focus, just getting inside to the birthing tub,” she said, “but [Julia] had other ideas.” Joseph Anderson supported his wife as she gave her final push, and midwife Sandra Lovaina rushed outside to aid the mother, catching baby Julia just in time.

As the Andersons arrived at the center, two police officers, who happened to be across the street at another event, saw the scene unfolding and approached the trio to offer assistance. Midwife Lovaina, however, handled the situation beautifully, making it clear to the officers that she was in control of the situation and caring for Anderson.

For Susan, this was her second labor and delivery at Natural BirthWorks Center, so midwives Sandra Lovaina and Gelena Hinkley expected a somewhat speedy labor, but Hinkley remarked, “No one was expecting it to be that fast.” Even though Hinkley had rushed to attend the birth, baby Julia had already been born by the time Hinkley arrived at the center. The speedy delivery was all successfully captured on June 19th by the center’s Ring security system, mounted next to the entrance.

Natural Birth Works is owned by midwives Hinkley and Lobaina and provides prenatal, labor, and postpartum services to mothers and their families. According to their June 27th Midwives Uncut YouTube video, precipitous births – or sudden births – occur only about 14% of the time during singleton deliveries (not counting the births attended by midwives).

The midwives’ goal and strategy when it comes to helping women give birth is to empower them by allowing them choices for their birth plan, and to support them through a natural birth. Of the Andersons’ parking lot birth, they said they asked Susan if they could share it. “[O]ther women should see this so that they know that birth is possible no matter where or what you’re doing,” they said, adding that sometimes there is “a lot of stigma” behind choosing a natural birth. Susan Anderson agreed to allow the video of her daughter’s birth to be shared to “try to empower” other moms, “and this was her way of being able to do it,” the midwives said.