London’s Great Ormond Street Hospital (GOSH) has requested the High Court for a new hearing in the case of Charlie Gard in light of new evidence that the experimental treatment Charlie’s parents, Chris Gard and Connie Yates, want him to receive, has the potential to help him.

11-month-old Charlie has been receiving treatment and life support for the last eight months at GOSH, but the hospital has been fighting to remove the child’s life support while his parents have been fighting to take their son to the United States for an experimental treatment. However, since the courts sided with the hospital and Charlie’s life support was set to be terminated on June 30, 2017, two international hospitals have contacted GOSH with “fresh evidence” concerning unpublished, positive research in nucleoside therapy for those with the same rare RRM2B mitochondrial depletion syndrome as Charlie. 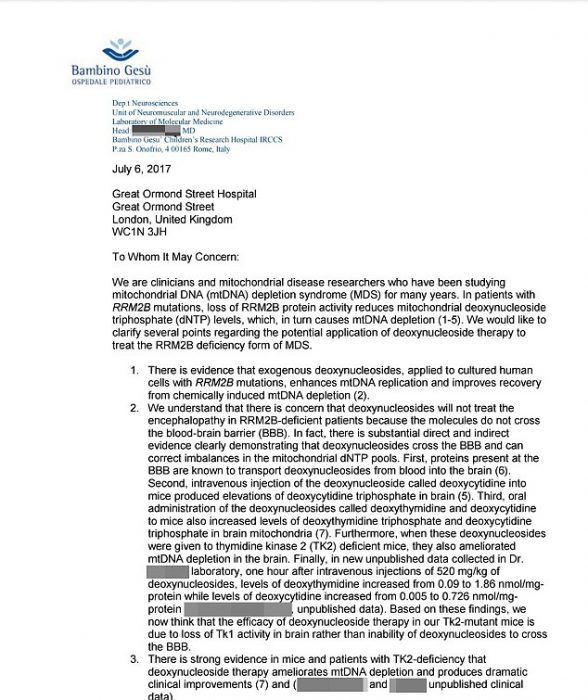 After receiving this information, GOSH released a statement saying:

[…] we believe, in common with Charlie’s parents, it is right to explore this evidence. Great Ormond Street Hospital is bound by the ruling of the High Court which expressly forbids us from transferring Charlie for nucleoside therapy anywhere. […] Great Ormond Street Hospital is therefore giving the High Court the opportunity to objectively assess the claims of fresh evidence. […] Charlie’s condition is exceptionally rare, with catastrophic and irreversible brain damage. […] Our view has not changed. We believe it is right to seek the High Court’s view in light of the claimed new evidence. 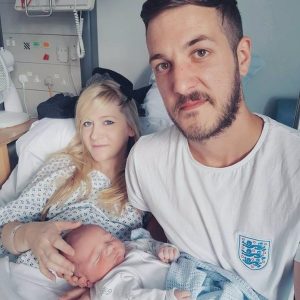 Charlie and his parents after his birth.

Hospital officials had “met with Charlie’s parents to inform them of this decision and will continue to keep them fully apprised of the situation.”

While the therapy for RRM2B-deficiency is experimental, and the clinicians from Bambino Gesù say it theoretically should be tested on mice before it is tested on humans, they believe “there is insufficient time to perform these studies” and “reconsideration of treatment for Charlie Gard is respectfully advocated.”

Charlie’s case is scheduled to be heard by Mr. Justice Francis on Monday, July 10, 2017, at two in the afternoon.

Yates told Sky News, “We’re hopeful and confident that Charlie may get a chance now.”

In the meantime, a United States hospital has offered to send the experimental medication to the UK to help treat Charlie. Since it is legally impossible for Charlie to be moved to a different hospital, the unnamed U.S. hospital which had offered to treat Charlie in the U.S. said, “Alternatively, if approved by the FDA, we will arrange shipment of the experimental drug to Great Ormond Street Hospital and advise their medical staff on administering if they are willing to do so.”