Just as racism and sexism are ‘beliefs,’ abortion is a ‘belief’ that diminishes and destroys the humanity of another class of human beings. We covered that in part one yesterday. But before we can see how that’s really true, we have to get into the science.

What Science Tells Us

You can pretend preborn babies aren’t human beings, but science proves otherwise, repeatedly showing that a preborn human is a unique individual from his mother. He has his own circulatory system, his own organs, his own blood type, and his own fingerprints. From the moment of conception — which has been described as a flash of light, a burst of fluorescence, or the “zinc spark” by scientists –he was his own person, separate from his mother, and very much alive.

How do we know he is alive? For one, he has a heartbeat (new science says as early as 16 days after conception), but in addition to that, he is growing. Non-living things don’t grow. Living things do. It’s as simple as that.

If abortion was all about a woman’s body, then she would be aborting herself. There’s a reason aborted babies are sometimes born alive – because they were alive to begin with. You can’t kill something; you can’t poison something or someone to death, starve it, or stop its heartbeat if it was never alive to start. 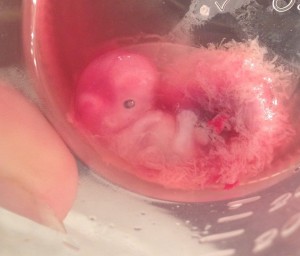 Back in 1973, when abortion became legal in the United States, ultrasounds weren’t a regular part of prenatal care. We couldn’t see inside the womb as we can today. So the argument that a preborn person is a “cluster of cells” or a “ball of tissue” was easily digested by the American public. Coming off the ‘free love’ ’60s, many wanted the freedom of sex without the responsibility of children (which is, as a belief, impossible because the two cannot be separated).

The idea that preborn humans are just “tissue” was proven wrong as soon as the window to the womb was opened for us. Yes, at the first stages, a preborn person is a group of cells, but he will continue to be a group of cells for the rest of his life. Just as you are. Every single human being is made up of a group of cells and his own unique DNA. It takes only a matter of days for that group of cells to come together to look like a human being and have a beating heart. Human life, however, begins well before we ‘look’ fully like the human beings we are today.

How History and Science Prove Abortion Is Wrong

Go back to part one in this series to review the history. We know that science proves that a preborn child is a living human being (after all, if he isn’t human, what is he?), and past human rights abuses show us that believing that a particular group of people is inferior is completely unacceptable and always on the wrong side of history. Holding people as slaves is wrong. Killing people for their beliefs is wrong. Beating women is wrong.

Why do people see abortion as right?

All a ‘pro-choicer’ would have to do is pay attention, watch the videos of what abortion does, and educate himself. Blindly following the abortion party line will simply lead to more oppression and discrimination against an entire group of people by way of abortion.

Abortion is an act of violence against another human being simply because that human being is deemed “unwanted” or an “inconvenience” or “disabled” or “not conscious of his own life.” The reason or justification doesn’t matter. Abortion is still wrong. Otherwise, any of us who felt unwanted or like an inconvenience, or who had a disability, or were simply sleeping or blacked out from drinking alcohol, wouldn’t have the right to life. 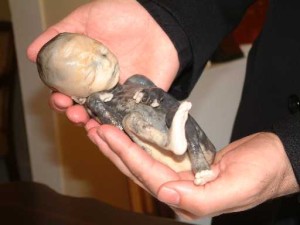 In the video below, former abortionist Dr. Anthony Levatino shows us how the abortion pill works. What some people currently see as not a big deal is actually quite awful, as the preborn child is starved of nutrients and oxygen until he dies. (Information on reversing these abortions is here.)

In this next video, Dr. Levatino describes how a second-trimester D&E abortion is performed. It’s cruel. It’s gruesome. But D&Es are the most common form of second-trimester abortion in the U.S. They happen every day, and not only does our government approve them, but some politicians want us to pay for it.

Just because preborn human beings can’t stand up for themselves and can’t speak to say that their lives matter, too, doesn’t mean it is right or acceptable for us to see them as inferior and kill them for it.

Today’s Hitler is the abortion industry, and today’s slaves are the preborn children, who are seen as unworthy of rights because of their age and location. What abortion does to a preborn human would never be allowed or accepted if it were done to an animal, never mind a born person. We can’t continue to say abortion is just a ‘belief’ and look the other way. After all, hate crimes are fueled by a person’s beliefs, and we know how the majority of Americans – and you and me, personally – feel about hate crimes.