An old friend’s recent Facebook comment got me thinking about abortion and how people see being pro-choice as an opinion — a belief. After reading what he had to say, I logged out to think over his logic, and what I immediately realized is that abortion is a belief. But it’s a belief like racism is a belief, and like sexism is a belief.

What History Teaches Us

Despite people’s general distaste for relating abortion to the Nazis and to slavery, stay with me here and focus on the logical connections. Hitler believed that Jewish people were an inferior race. He believed this so deeply that he saw it as his responsibility to kill them. Men, women, and children were sent to gas chambers to die simply for being who they were, all because of one person’s belief about them. Other people let it happen because it didn’t affect them directly and because Hitler was doing great things for the Germans. Everything Hitler did was legal, so imagine being one of those people who said, “I don’t believe in killing Jews, but I won’t tell Hitler he can’t.”

Slavery dates back to long before the days of America and exists even today where one group of people believe that another group of people are less important, less worthy. Slaves can be killed because they are considered property; they are not seen as humans beings with any rights. American slave owners didn’t want to give up their slaves because that would mean giving up their wealth by having to actually pay people to work for them. They had their justifications for keeping human beings as slaves, but that didn’t make slavery acceptable. Imagine if those who stood against slavery instead said, “I don’t believe in owning slaves, but I can’t tell anyone else that they can’t. That’s their choice.” 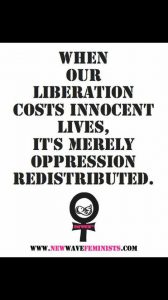 Women in America were once — and some would argue still — seen as inferior to men. Women didn’t have the right to vote; they couldn’t get an education. In 1973, the U.S. Supreme Court ruled in Bradwell v. Illinois that it was constitutional to prevent women from taking the Bar exam, just because they were women. Until women stood up and forced men to count them as equals, they were seen as less than. Domestic violence wasn’t even illegal and men could beat their wives with no consequences.

Thankfully, women — unlike the preborn — could speak for themselves and could protest until their voices were heard. Still, the worst rights abuses weren’t legally ended until men finally said yes, women could have rights. Imagine what the world would be like today if women never stood up and if some men never stood beside them.

What these examples show is that history is on the side of the preborn and their right to life. You can believe all day long that a certain group of people is inferior and unworthy of civil rights or protections, but that doesn’t make your belief right. History proves that humans who have believed other humans were inferior are wrong.

But before we can realize that believing in abortion is the same as believing in racism or sexism, we need to first realize that embyros and fetuses are in fact human beings whom we are discriminating against. We’ll cover that in part two.