“It is a poverty to decide that a child must die so that you may live as you wish.” -Mother Teresa

(by Faith Kuzma and Meredith Kuzma, a mother-and-daughter team)

Recently, I attended the rally for religious freedom protesting the HHS mandate. Across the country, approximately 70,000 people protested the administration’s health care mandate as eliminating conscience protections – to the extent that religious freedom is undermined. When Catholic church leaders rightly point out that it is the Catholic hospital, school, or charity that ultimately foots the bill for morally objectionable abortion-inducing drugs, it seems the public often hears this as miserly unwillingness to pay for a social service. Some see it as an obstruction of a “woman’s right to reproductive choice.”

Despite the fact that the Catholic church freely provides women’s health care in the form of free ultrasounds, pregnancy tests, and other services, I have heard complaints that Catholics do not want to help shoulder the cost of women’s essential health care. Such comments make me think about how health care is indeed related to economic justice, especially in the context of a “choice” culture. How we vote, as Catholics and Christians, will depend a lot on how we interpret the issue of social justice for women. Voting for pro-choice candidates becomes increasingly problematic in light of the massive economic and social impacts of a pro-choice culture.

The right to health care is a basic part of Catholic social teaching. It isn’t that the Church doesn’t want to help others through ObamaCare because this affects Church members’ pocketbooks. The real issue is that paying for abortion-inducing drugs affects our collective conscience as Catholics and Christians as well as our right to religious liberty. Our society and our government seem intent on a “choice” mentality instead of working on a joint project called the “common good.” The right of an individual becomes more important than those hit by the ripple effect of the individual’s “choices.” Individuals select lifestyles, and the government ensures that there is minimal collateral damage.

Yet a broader lens might convince us to look beyond the individual in a choice culture that promotes contraceptives. In an article entitled “Federal ‘Family Planning’ Spending: Domestic Population Control,” Jacqueline R. Kasun points out the link between the falling birth rate and government funding. In particular, clinics based in communities offer contraceptives (under Title X), and an “excessively persuasive” Planned Parenthood pushes contraceptives on students in the public schools.

In industrialized countries worldwide, there is increasing concern about replacing the current population. Will there be a next generation? Given our aging population, it seems particularly shortsighted to continue to further a strong contraceptive-agenda through the HHS mandate. For many years, baby boomers have paid into Social Security and do not regard it as an entitlement. It has been argued that increasing the population – rather than perpetuating contraceptive use and abortion – is one of the best ways to salvage Social Security (W. Patrick Cunningha,m “Is Social Security Doomed by Contraception and Abortion?” PRI Review: 17.6 Nov. 2007 Web. 20 June 2012). For those who’ve paid into Social Security, economic justice in their retirement years is not an abstract proposition, but a right.

Through the lens of a modern, materialistic culture, human life is assigned a diminishing value, and society has interpreted human life increasingly in economic terms. A common argument is put forward that poor women are unduly burdened by giving birth to children, and therefore, abortion is the necessary backup to failed contraception. However, Erika Bachiochi points out that although single women do face financial challenges, abortion itself has both individual costs (including emotional and physical health of the mother) and social costs (including the effects on the family). Bachiochi provides evidence from numerous studies to back her conclusion that “[a]bortion harms women physically, psychologically, relationally, and culturally.” Although pegged as reproductive freedom making woman the economic equal to man, it turns out that the woman “alone has to live with the possible short-term and long-term medical consequences of the abortion for the rest of her life.” Abortion has not provided the supposed freedoms women of the seventies assumed.

When I was an undergraduate in the ’70s (and a staunch feminist), I recall reading of a future in which women were valued for their unique contributions to marriage and family life and that feminists wanted social change that would recognize woman’s innate dignity. Instead, the male model of success and economic necessity is held up as the determinant of women’s role today. The paradigm of sexual equality seems intent on turning women into functional men as a matter of choice. Bachiochi observes that the real work of creating a woman-friendly workplace was sidestepped by the notion that women needed to have abortion in order to compete economically, saying, in effect: “You choose: your baby or yourself, your baby or your future, your baby or your success; this is a man’s world, and you’d better become like a man – that is, not pregnant – if you want to succeed.” Giving lip service to choice, this paradigm of economic necessity often dominates the thinking of young women, some of whom are already in debt for college expenses. 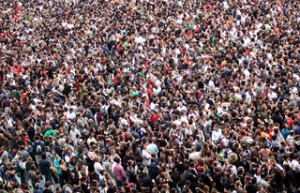 What is the real truth about population? Photo credit: James Cridland on Flickr

In reality, our choice culture is eroding the economic and social well-being of our society. Analyzing the effects of abortion in Australia, Richard Aleman concludes that GNP is dramatically affected by the decreased fertility rates resulting from increasing numbers of abortions in that country. If abortion was banned in Australia, Richard Grant suggests that each working day would allow for enough new births to require the building of a primary school. As an economic stimulus, rising fertility rates would serve to bolster Australia’s overall financial health. Aleman concludes:

There is increasing evidence that abortion is linked to an increased incidence of social and health disorders, such as marriage breakdown, child abuse, mental and physical illness, drug abuse, breast cancer and suicide. … Our failure to protect the unborn is exacting a high price, and the longer we wait the higher the financial and social bill will be for us, our children and our grandchildren.

Clearly, there is a real cost on society in the form of delayed health and societal effects from contraceptives and abortions as well as a reduction in the number of consumers and producers.

ObamaCare is not good for our society, and with the legal phrasing in the mandate, it is a violation of religious freedom in favor of a culture where choice becomes the new standard for right and wrong. “Do it if it feels good.” Religion is no longer seen as good for the country; rather, society has determined that religion is only a personal good. Barack Obama, having accepted campaign funding from Planned Parenthood, finds himself answering to an utterly disreputable organization. National investigations, such as those conducted by journalist Lila Rose of Live Action, have uncovered failure to report the sexual abuse of minors, improper disposal of medical records, and Medicaid fraud in multiple states, among other violations.

Instead of answering to God, the president is answering to a radical reproductive choice mandate, allowing Planned Parenthood to redefine and take away the right to life. Under pro-choice politicians, religious liberty is being diminished as only the right to worship in a church building, and the right to minister as people of faith will soon be replaced by a government agency unconcerned with ministry. Will the American people allow pro-choice politicians to deny life to an entire generation of Americans and to diminish religious liberty in this country on the excuse that women’s health care demands it?

Some will say that you cannot let your vote be determined by the single issue of paying for contraceptives and abortion-causing drugs. Behind the HHS mandate is a choice ideology that denies the fundamental, God-given right to life for millions of unborn children. It becomes increasingly clear that the priority is not the common good and that choice culture, touted as the most progressive ideology, is not healthy for anyone. Observers have noted that the overall cost of an abortion-on-demand culture is the resulting devaluation of human life. British social critic Peter Hitchens contends, for instance, that abortion “corrupts any society which freely permits it.” We cannot embrace only the good positions of the Democrat party while ignoring the reality that the Democrat platform contains the choice ideology that life does not in fact begin at conception. The basic right to life, ceaselessly fought for by Catholics for thousands of years, is the foundation of a Catholic social conscience.

“Abortion is a foundational issue; it is not an issue like housing policy or the price of foreign oil. It always involves the intentional killing of an innocent life, and it is always, grievously wrong.” –Charles J. Chaput, Archbishop of Philadelphia

Editor’s Note: Live Action cannot endorse political candidates. This article is an opinion piece, urging voters to consider how they vote. It is not an endorsement of any candidate.