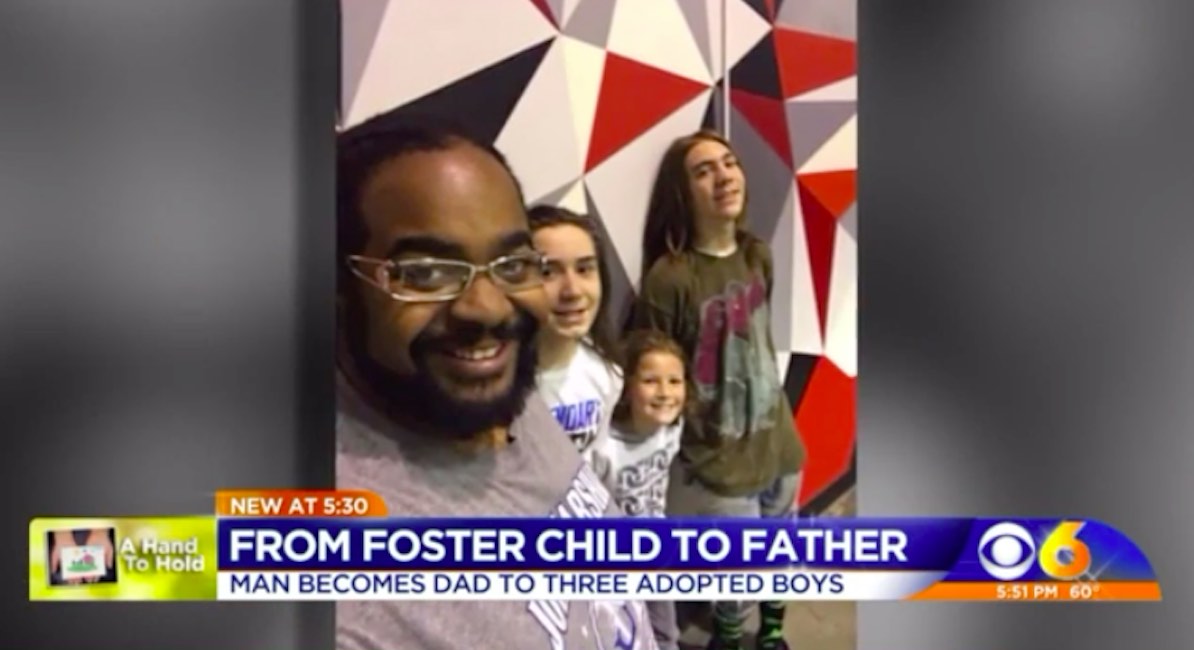 Barry Farmer is a single dad, but he’s not a typical father. “I look in the mirror all the time, and if you would have told me 10 years ago that this would happen, I wouldn’t believe you,” he told WTVR in 2017. “I wished to be a father, but it wasn’t going to be this soon.” Yet he’s a father to three boys, due largely to his own experience growing up in foster care, which steered him towards adoption.

Farmer grew up in Kinship Care, a form of foster care in which a relative steps in to care for a child if their parents aren’t able to. Raised by his grandmother, Farmer said she taught him to be responsible, and he helped take care of her as she got older, too. But when he turned 21, he had an idea: he applied for a foster license to take children in, too. “Becoming a foster parent was like a tribute to my grandmother because I could never pay her back, but I was definitely able to pay it forward,” he told People. And after he got his foster license, he was placed with then-eight-year-old Jaxon, with the plan originally being for him to reunite with his biological family. But after a year, Jaxon wanted to stay with Farmer.

He said that Jaxon began calling him “Dad” immediately, which was especially meaningful for Farmer. “It was touching that this child of a different race felt comfortable enough to call me Dad; he was a child searching for belonging in a not so typical situation,” he said. So Farmer adopted him, making them officially each other’s forever family.

Please know, children in Kinship Care could possibly carry the same feelings of loss as an adoptee. This my first Christmas living with my Grandmother. I was still getting to know her since we didn’t have a relationship prior to me moving in. Check out the MC Hammer doll lol. This was my new normal, my new beginning, stability. My Grandmother didn’t have a lot to give me but it was more than what I ever had up until that point. I was fed, well groomed, my own room and loved. I may not have had what other children around me had growing up, but I did have a CHANCE. Because I realize not everyone gets a CHANCE. Anyone that tries to tell you that you don’t need to be grateful for a CHANCE to heal, only want you to suffer in their misery, I refuse to do that. I choose to react to my present so that my future can be peaceful. THIS PICTURE BRINGS ME PEACE. To my fellow KinshipCare/FosterCare/Adoptees, I hope you find your peace. Foster Parents and Adoptive Parents I hope the children in your care find their peace.

Two years later, in 2013, Farmer adopted Xavier, giving Jaxon a little brother. Then, in 2014, he found out about Jeremiah, who was four at the time and in the foster care system. Jeremiah would soon become part of the Farmer family, too. “Jeremiah’s plans to return home had changed during that time, and that’s when my two older boys and I decided to welcome him into our home permanently,” he explained in his interview with People.

Since adopting them, the three boys grew out their hair along with Farmer, who said that Jaxon and Xavier plan to donate their hair to cancer organizations when it’s long enough. “They are loving, strong-willed and, at times, extremely thoughtful,” he said. “My sons have a lot of potential to make a positive impact on this world. I just hope they realize it and act on it.”

As for their difference races, Farmer said he doesn’t care what other people think. “Skin does not separate us, it does not define our family,” he said to WTVR. “It’s just a part of our family. So when it comes to things of, you know, push back, or ignorance, we’re really not paying attention to that, because they don’t know us.”

It has truly been a privilege to be a father. So many take this title for granted while I Cherish every moment.

He also wants people to know that older children in foster care are still worth loving. “There’s no reason to be afraid of our foster children who are waiting to be adopted,” Farmer told WTVR. “And all they need is some security, some love, some attention, stability. Because older children are the babies that you’re looking for. There are a lot of firsts to the experience as well: you can still have your first bike ride, your first trip to the beach, first roller coaster, first day of school. All of that can be experienced through foster care adoptions.” He told People that there are hundreds of thousands of children who need “closure on their traumatic past,” simply needing “your understanding, your compassion and your guidance.”

For Farmer, there’s no question about the difference his sons have made in his life. “Fatherhood has brought me lots of joy. I can’t imagine my sons not being with me.”