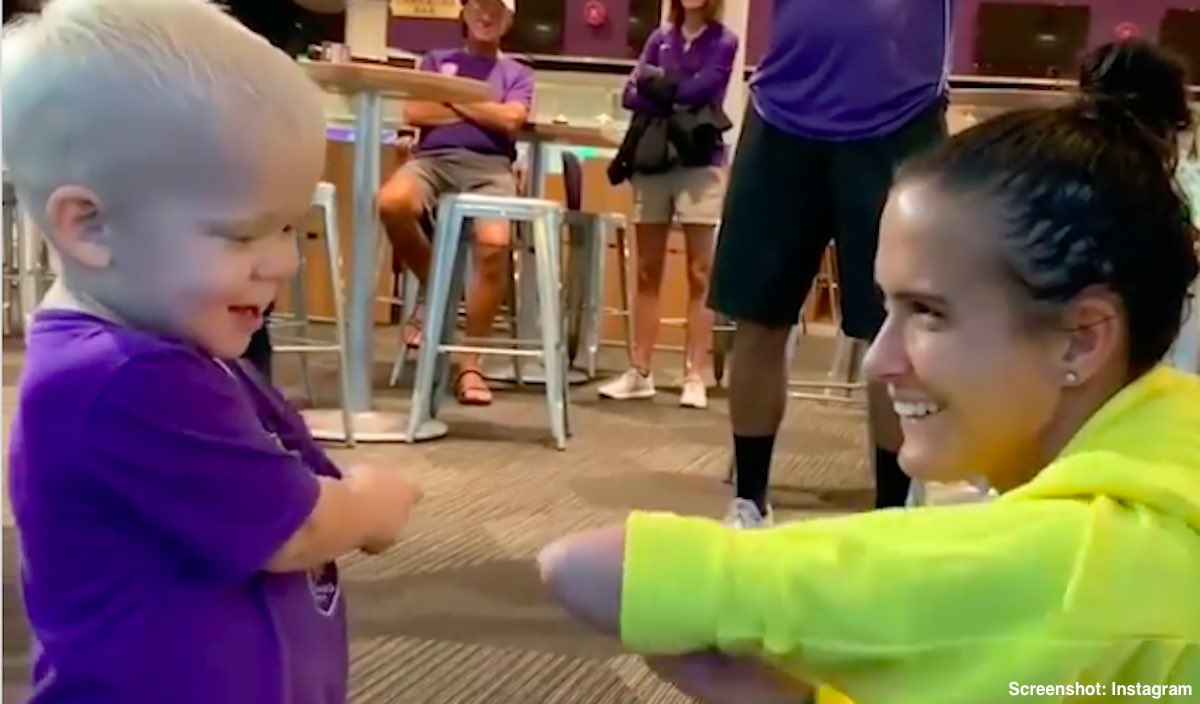 As a defender for the Orlando Pride women’s soccer team, 26-year-old Carson Pickett is no stranger to the spotlight. But last year, a photo of her went viral not for her athletic achievements, but for her meeting with a very special fan.

Pickett was born missing her left hand and part of her forearm, and after one of her games in April she met a young fan with the exact same disability. The Orlando Pride shared a video from their meeting on social media, and it generated so much positive support that some called it the 2019 Picture of the Year.

Yesterday we had the chance to spend some time with the beautiful and talented @carson.pickett who plays professional soccer for @orlpride in the @nwsl. Carson is part of our @lucky_fin_project family as she is missing her left hand. We have been following Carson since she was playing for @reignfc same city who also drafted our buddy @shaquem_griffin. She was traded to Orlando in Dec, we have been dying to meet her. Thank you to @fox35amy and the Orlando Pride for setting this up. We had the chance to talk with Carson and her parents. Long enough to see the strong spirit she has and the example she portrays on and off the field. What makes Carson different is not her arm but her desire to be the best. Her Dad said to me that one thing that was never allowed in the home were the words "I cant". Carson is an amazingly beautiful woman who stands as a shining example for our children. We will be going to many more Pride games and look forward to seeing Carson do a throw-in. I dare someone to give her a penalty for not getting the ball behind her head. The whole stadium and the Tidd family loves this girl and I would not want to be them. We'll share some more videos of the meet up soon, but this video of hide and seek with their arms is too funny. Such a sweet moment between 2 amazing people. #orlandopride #carsonpickett #tenfingersareoverrated #luckyfinfamily #luckyfinproject #limbdifferenceawareness #limbdifferenceawarenessmonth #strongwomen #differentlyabled #againstallodds #rolemodel #inspire #hideandseek #orlandokids #bigsister #imnotcryingyourecrying @lucky_fin_project @barstoolsports @espn @foxsports @nbcsports @cbssports @theellenshow @todayshow @goodmorningamerica

Even though Joseph Tidd was not yet two years old at the time, Carson told USA Today that “Literally within five minutes of me meeting him, we had an instant bond. It’s interesting, though, because for a kid that young, I didn’t expect him to connect the way he did. Even though we both have the same [birth defect], it was amazing to me that it felt like he realized why we were bonded.”  She added, “I know I might be seen as his role model, but he’s also mine. It’s just a gift to feel so much emotion from a little boy who understands you in a way other people can’t.”

In an interview with CBS Evening News, she shared, “”Seeing him gives him and me just as much joy as seeing my best friends.”

The two met as part of Carson’s partnership with the Lucky Fin Project, which raises awareness about the 2,500 children born with limb differences in the United States each year. Groups like the Lucky Fin Project ensure that children who are born missing limbs grow up in a different world than Carson, who didn’t know anyone who looked like her as a child. Joseph Tidd’s parents are part of that effort, maintaining his Instagram account to continue supporting children like him.

Commenting on her ongoing friendship with little Joseph back in 2019, Pickett said, “When I was younger and I didn’t know how the world works, it was hard. My parents always tell me that God put me here for a reason. The biggest thing I’d want Joseph (and others) to know is that even if people see you as different, it’s what’s in your heart that counts.”

In late May of this year, Pickett told Just Women’s Sports, “I want [people] to ask me what happened because then I can educate more people about limb difference. It’s not that I want to stand out, but I want to help people who are like me. And I know I’m also reaching people who have both of their hands, but who may be struggling with other problems. Everyone has their own story, everyone is different, everyone has gone through struggles and has weaknesses. It’s how you use that story and those weaknesses and the struggle to best help people in the world. Now that I’m able to reach so many diverse groups, it’s really become more of a blessing.”