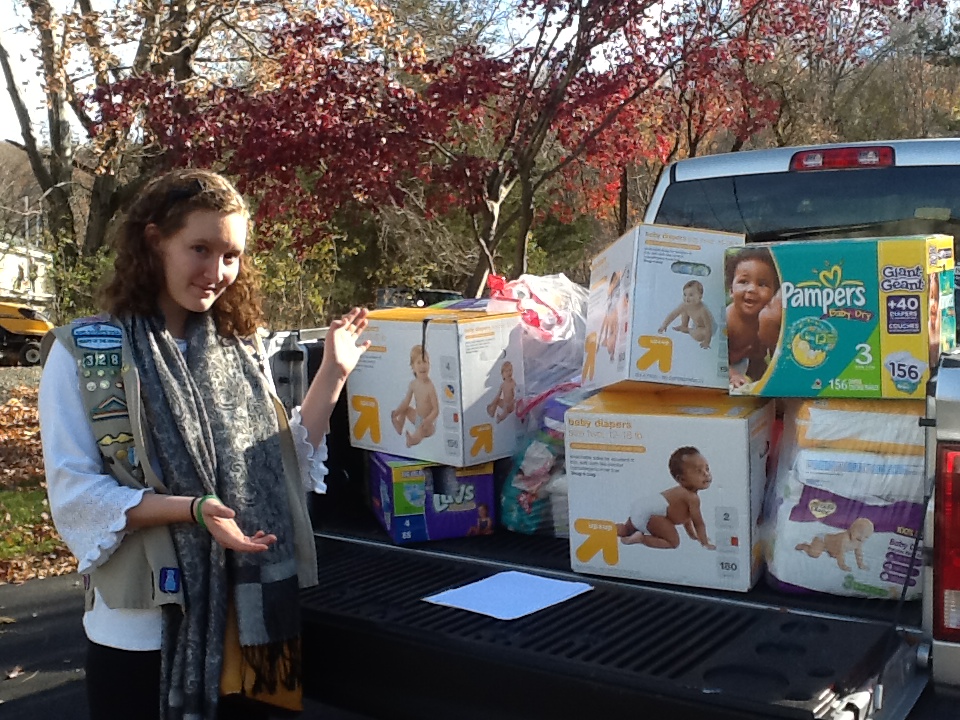 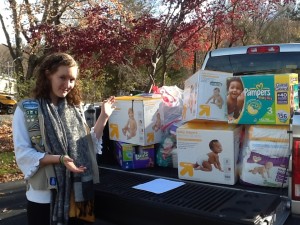 Hannah Sheboy with her donated items for Birth Right.

Hannah Sheboy, 16, has been a Girl Scout most of her life and believes that there are some clear positives to being a part of the organization. From helping girls build their confidence and making new friends to having a strong foundation to grow up with, the Girl Scouts have helped Hannah become who she is today.

“The positives can’t outweigh what’s going on [with the Planned Parenthood-Girl Scouts connection], but they are certainly there,” says Hannah. “I don’t think I’d be able to do a project like this without the strong foundation I have from both my church community and my Girl Scout community. So even if it’s not Girl Scouts that you’re involved in, it’s important to have some foundation. I’ve gained a lot of confidence, gained a lot of friends, and gained a strong relationship with my older sister and my mom through Girl Scouts.”

Hannah’s Girl Scout Gold Award project needed to include something that had a lasting impact. It had to be something that would affect her community in a positive way. So Hannah decided that she would help pro-life causes. With the support of her parents and her church, Hannah got to work on her three-part project.

The first part involved collecting clothes for Birth Right and spreading awareness about the non-profit organization which is devoted to helping pregnant women and their children. Hannah held a clothing drive that included advertisements in the local newspaper and a fundraiser at the local Lowe’s.

“The clothing drive went really well,” says Hannah. “The main box was in my living room, but we had an entire side of my living room completely covered in bags at one point. A lot of people called to set up donations and a lot of people donated money. I had a bake sale and people gave money to help buy clothing and receiving blankets. We had 20 to 30 bags of maternity, baby, and kids’ clothes and 10 big boxes of diapers.”

For the second part of her project, Hannah showed October Baby, a pro-life film following a teenage girl who discovers she was an abortion survivor, to her church youth group. She also showed the group to the 8th grade CCD class. While a lot of the teens had a hard time taking it seriously at first, Hannah feels that they ended up having a great discussion after the movie because October Baby makes it easy to appreciate being pro-life. 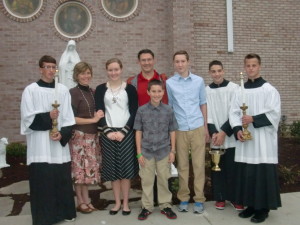 Hannah and her family in front of the garden she created in memory of all aborted babies.

The final part of her project needed to make a lasting impact. Hannah was considering creating pro-life brochures to have at church or starting a blog; however, her pastor had a different idea. After receiving some donated statues he asked Hannah if she would like to use them to build a garden. So Hannah and her family and friends built a garden at the front of the church that is dedicated to the memory of all aborted babies.

“I think it’s very important to spread awareness that this is an issue without being in peoples’ faces to the point where they resent you for it,” says Hannah. “The little messages of watching October Baby, or a pretty garden where they read the plaque, or the box for Birth Right. It turns their heads in a subtle way.”

Although Hannah has sold Girl Scout cookies in the past, she didn’t choose to do that this year.

“Although it’s often kind of denied that there’s some sort of pro-choice connection, [the Girl Scouts] are not exactly pro-life,” she explains. “They donate to a lot of different groups, and they don’t tell you who they are donating to or who they’re getting money from. So I’m not sure about it. And also, it’s not really worth it. We don’t make money individually off cookie sales; it’s all going to the national level, and it doesn’t stay local. So I would have rather done this to work at a local level. It’s got to start from home first.”

Hannah enjoyed every aspect of her Gold Award project and is really proud of how many people it affected. Strangers and friends alike appreciated that Hannah brought the subject of abortion out in the open. And she’s really proud of all the people who helped make it possible, especially her parents, saying she couldn’t have done it without them.