Abortion advocates claim that abortion needs to be legal to prevent women from being butchered in back-alley procedures. And yet abortionists who injure and even kill women time and time again are allowed to continue to do so. The latest example is from the state of Georgia, where Tyrone C. Malloy has had his license reinstated, despite killing women and committing Medicaid fraud. 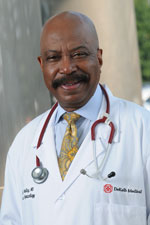 Malloy was fined a mere $5,000 in 2004 after he refused to perform a c-section on an obstetric patient who had a fever and whose baby’s heart rate was decelerating. Instead, he merely left the hospital without informing the woman’s primary care physician of her condition. The other doctor eventually was able to perform the c-section, but it was too late. The baby died.

Malloy has also killed at least one woman. In 2009, one of his abortion patients was rushed to the emergency room after a botched abortion, and she went into cardiac arrest and died. According to the licensing board, Malloy never determined how far along in her pregnancy she was before committing the abortion.

In addition to killing patients, Malloy also spent 21 months in prison for fraudulently billing Medicaid for over $386,000. His license was suspended, but it has since been reinstated — a decision the board seemed to want to keep quiet.

“In October, the Composite Medical Board quietly reinstated Malloy’s license, which he surrendered while incarcerated,” the Atlanta Journal Constitution reported. “Instead of issuing a public board order that would have been posted on its website, as is typically done when a doctor’s license had been surrendered or revoked, the only public record of the board’s decision was a line in that month’s meeting minutes.”

READ: ‘Blood was pouring out of her’: Woman dies after abortionist cancels ambulance

As if his record was not bad enough, abortionist Malloy seemingly has no remorse for his actions. On his website, he blamed “anti-abortion radicals” for conducting a “conspiracy” against him, pointing the finger instead at…

[t]he vicious conspiracy to destroy my reputation, my life and that of my family by the radical anti-abortion factions that used their power and influence to come after me with hatred and an unprecedented vengeance was an injustice, up to and including, the judicial system of the State of Georgia, in particular, the former Attorney General, Sam Olens.

An abortionist who has killed at least two patients and committed Medicaid fraud is considered progress for women? Women were told that they needed legal abortion so that they wouldn’t have to see back-alley butchers and criminals — like Malloy. And yet here we are, with legal abortion in the nation, and seemingly, nothing at all has changed.