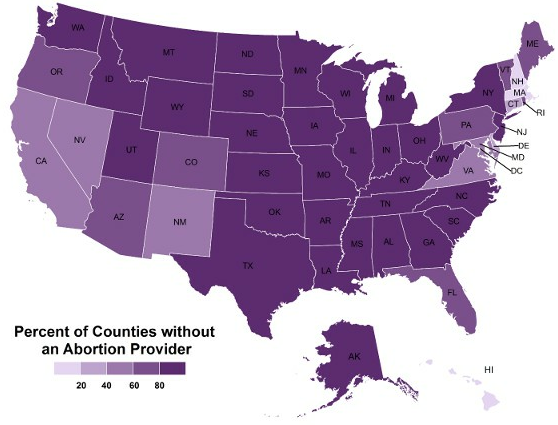 Richard Florida has published an article in The Atlantic called “The Geography of Abortion” which takes into account two large sets of data to compile graphics showing the geographical dispersion of abortion rates, abortion clinics, etc.

One of the first things to jump out of this picture, which shows where abortions happen in America, is that more conservative “red” states tend to have fewer abortions per capita than the more liberal “blue” East- and West-Coast states: 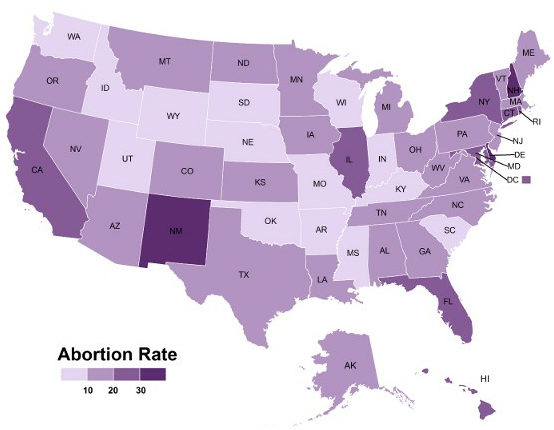 Florida uses technical language to describe this reality of abortion variation between red and blue states:

Prof. Michael J. New takes this difference to be at least in part due to the positive effect that pro-life laws have on society – red states are more likely to have passed pro-life laws over the past few years than blue states – and those laws encourage at-risk women to choose life. He writes:

The most important service that Florida’s analysis provides is that it drives home the point that red states have lower abortion rates than blue states. He shows that state abortion rates are positively correlated with support for President Obama in 2008 …

Also, Florida cites some research indicating that state-level pro-life laws, including public-funding restrictions and parental-involvement laws, result in lower abortion rates. Florida could have expanded on this. At one point, the states enacting pro-life laws were more diverse ideologically. For instance, among the first states to enact pro-life parental-involvement laws were solid blue states like Massachusetts and Rhode Island. However, as a recent Guttmacher analysis demonstrates, the states most active in passing pro-life laws in recent years are located in the South and Midwest. This is also contributing to the lower incidence of abortion in red states.

Here is a separate chart created by Florida showing how few abortion clinics there are by county – especially in the South and much of the Midwest:

All of this data drives home a simple point: pro-life progress must continue in “red” states, and we must work hard to end abortion in areas of the country where abortion is already relatively rare. At the same time, however, we must ultimately pay attention to the fact that the most pro-life progress to be made is in blue states on the West and East coast. Pro-lifers here must be especially proactive!

A new report released this week by the National Center for Health Statistics revealed, meanwhile, that the abortion rate in the United States has dropped 25% overall since 1990. The abortion rate decline for married women was even higher. Check out Steven Ertelt’s analysis here, or check-out the full study here (PDF).

Once again, these new sets of data are simultaneously signs of progress and hope, and a call to further pro-life action and more passionate commitment!