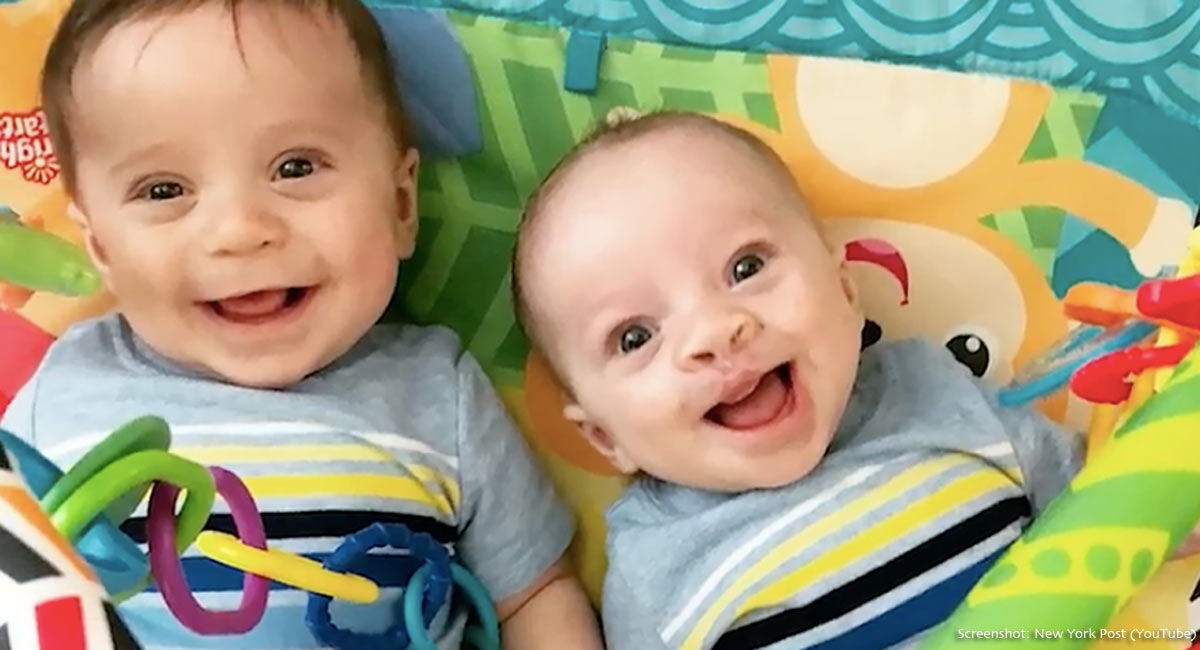 Matt Martin, 28, and his wife Sara have twin boys, born in April of 2018. But one of their sons, Cam, was born with a bilateral cleft lip and palate, among the most common and typically correctable birth defects. But as Martin wrote in an op-ed for Love What Matters, some people still believe this is worth having an abortion over.

Their first son, Jack, was born healthy and typical, but when Cam was born two minutes later, the operating room went silent. “As the doctor held him up, the room went silent,” Martin recalled. “Something was different. The doctors were worried. My wife’s doctor leaned over to a nurse and asked her to call the NICU. ‘What’s wrong?’ my wife asked. ‘I don’t know,’ is all I could say.” Martin went to see his babies, kissing Jack and then asking what was happening with Cam. “The nurse, uncomfortable, looked over at the other nurses. She whispered to them. After what seemed like forever, they all turned to me,” he wrote. “‘He’ll be okay.’”

Seeing Cam was difficult for Martin at first. “It was a shock,” he admitted. “I didn’t know what I was looking at. There was clearly something wrong on his face, but I had never seen something like that before. Nobody said anything. The nurse put him in my arms. He cried and cried, and all I wanted to do was help him. I have never in my life felt so helpless.”

Well, my little guy had his first surgery today! He’s small, but one of the strongest people I know. – “Don’t let them look down on you because you are young.” 1 Timothy 4:12 — #cleftpalate #cleftlip #cleftstrong #cleft #beardeddad #beardpower #beardedlife #beardsofinstagram #beardgang

Cam had to go to the NICU to make sure he could eat well, and the doctor apologized for not seeing the cleft lip and palate on the ultrasound during the pregnancy. They met with plastic surgeons after going home, and was fitted with a mouthpiece to prepare for his first surgery at four months old, which would be the first of many. “At 18 months he would have his hard palate repair and they would reshape his nose,” he said. “Between ages 4 and 6 he would have a bone graft done to make his top gums one solid piece.”

Martin did not sugarcoat the difficulties adjusting to having a child with a cleft lip and palate, but also explained how much they grew to love their son’s face, just the way it was:

We had to take the NAM out twice a day and clean it and constantly fix the tape. He had a special bottle that he had to use with a valve in it since he couldn’t suck. I won’t lie to you, it’s hard. But it’s hard in the sense that you don’t want your baby to have to go through all of this.

We LOVED the moments when the NAM came out and we got to see his huge beautiful smile. It’s crazy how fast you fall in love with them. We just wanted to stay home with him all day and stare at his face. As his surgery quickly approached, we got a lot of anxiety. This little boy wouldn’t look like the same little boy anymore. He wouldn’t be the same boy we fell in love with. It’s weird to say, but we didn’t want to do it.

After the surgery, there was an adjustment period, because the face they had grown to love was gone.

My wife and I cried… a lot. He was so different. He was in so much pain. What had we done? The nurse told us a lot of cleft parents go through that. That there’s a grieving period you go through. After he was over the pain, and his personality was coming back, we saw our son. We REALLY saw our son. His huge smile was still there, and he was just as beautiful now.

He healed fast and has the best freakin’ personality. That kid loves so hard. Do I wish he didn’t have to go through all of this? Of course. But do I wish we never had him? A million times no. This baby has changed me in so many ways. He really has changed my life.

While Martin and his wife are thrilled with both of their sons and love Cam, even despite the difficulties of the surgeries, others don’t seem to understand — including so-called friends. During a group text, one friend said something horrifying.

“As with a lot of people these days, politics got brought up,” he explained. “None of us in the group chat have the same views and things unfortunately got heated fairly quickly. The topic of abortion came up, and I won’t get into that, but I did bring up how I think we’re getting into a not so great spot with abortions. For example, due to genetic testing, babies with clefts are being aborted three times more in some countries and even HIGHER in others. The people want a baby, just not that baby. Having a cleft baby of my own, I strongly feel that that isn’t right. My ‘friend’ said, ‘Come on, of all people, you should get why someone would want to abort a cleft baby.’”

Martin disagreed — strongly — and said this was why he decided to share his son’s story. “Why would he think that? Why would someone think I would agree that babies like my son shouldn’t have the opportunity to live, simply because they’re different?” he asked.

“Not long after that statement was made, I spoke my last words to him. BUT, I thought, maybe this could lead to great opportunity to share my son’s story (so far) and hopefully shed some light on clefts. So MAYBE, when a mom and dad go to get a sonogram or get blood work done and find that they’ve got a beautiful cleft baby, they won’t think their world is over. That it’ll just be a little different.”