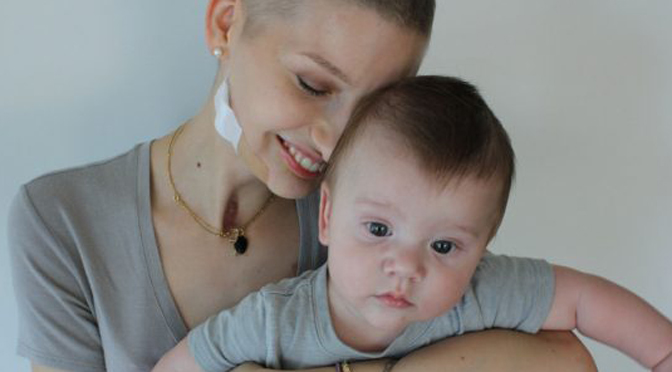 Elizaveta Bulokhova from Ontario, Canada, thought there was a problem with her teeth when she first noticed her jaw becoming inflamed in the spring of 2014. Two months later, after discovering she was pregnant, the 24-year-old found a small, hard, painful lump in her jaw. She told the Daily Mail that she went to the dentist, who told her to come back in September when she was in the second trimester, in order to have an X-ray without hurting her child.

It turns out waiting those two months was a chance to buy her baby some time to develop in the womb.

After that X-ray and three biopsies, Bulokhova learned she had cancer – specifically, osteosarcoma of the mandible. Doctors told her to abort her baby so she could have chemotherapy, and she thought that it was something that had to be done.

She thought abortion was her only option.

“He was very active and I would talk to him often while he was in my womb,” she told Vice. “I had to tell him to stop moving because I couldn’t keep him and then all of a sudden he did. He listened; he stopped moving.”

But before her chemo would begin, Bulokhova needed surgery, and though her baby would be in danger, she went through that 16 hour surgery (and more) while pregnant. Doctors removed the tumor, along with 95% of her jaw. They then reconstructed her jaw using fibula bone from her leg and nerve and skin tissue from her leg, arm, hip and shoulder, according to the Daily Mail.

Her jaw was wired shut for 10 weeks and she required a feeding tube and tracheostomy. She couldn’t walk, brush her teeth, eat, or speak. Complications kept delaying her chemotherapy.

Then, two days before her scheduled abortion, Bulokhova and her boyfriend Roman Troubetskoi asked doctors if it was safe to deliver their son. She was 28 weeks along, and to their surprise and joy, the doctors said that yes, they absolutely could deliver the baby.

“I just told myself whatever the universe has in store for me I will accept it,” she told the Daily Mail. “If my baby was meant to be born, he will be born.”

In early December 2014, baby Valentin was born via C-section. Doctors called him a miracle. He spent 51 days in the neonatal intensive care unit while his mother started her chemotherapy on Christmas Day. Elizaveta Bulokhova with boyfriend Roman Troubetskoi and their son, Valentin (photo via Vice)

Now 25 years old, Bulokhova will need more surgeries once her cancer is in remission. In the meantime, the former model is living her life, raising her healthy son, and even taking time out to get back in front of the camera for an inspirational photo shoot.

Photographer Manolo Ceron asked Bulokhova to pose for the photos as a way to use art to tell her story.

“[Bulokhova] is the theme,” he told Vice. “She is the story and everything else is a tool to enhance that beauty and her strength. It shows how fragile we are and how beautiful we are.”

Even in our weakest moments, Bulokhova shows us that we can find strength and move forward. Her story shows us that even when our greatest fears seem to be playing out, there is always hope.

“He saved my life,” Bulokhova said of her son. “That’s the biggest part. He really looked out for me. He gave me a schedule to follow that helped me work on myself without stopping. It didn’t give me a break, but in a good way. It kept me going. I didn’t have time to pity myself. I kind of believe that if I weren’t pregnant, I’d have been treated as another patient who’s going through cancer and needed surgery. He’s the one who took care of me to make sure everyone was on their game.”