Several Florida abortion facilities have recently closed, including a longtime National Abortion Federation (NAF) facility in South Florida owned by an abortionist once accused of forcing an abortion on his pregnant wife.

Florida’s Agency for Healthcare Administration (ACHA), which licenses abortion facilities in the state, shows that the All Women’s Clinic (AWC) in Ft. Lauderdale, owned by abortionist Theodor Lehrer, has closed as of April 12, 2019. State records also indicate that the abortion facility was last inspected in 2018. A phone call made by Live Action News independently verified that a recorded message left by the abortion facility states, “The office is permanently closed….” In addition, according to state records, as of the writing of this report, Lehrer’s medical license is currently listed as expired as of the end of January and now shows as “delinquent.”

Live Action News previously documented how years earlier, the NAF clinic owner and abortionist was accused by his pregnant wife of forcing an abortion on her against her will after she refused his demands for sex. At the time, the Ft. Lauderdale Sun-Sentinel reported, “The victim, who filed charges in April 1988, claimed Lehrer handcuffed her and aborted her 11-week-old fetus at his home.” According to the media outlet, Lehrer was then charged with two counts of sexual battery and a kidnapping charge. Lehrer’s wife reportedly became very ill with Hodgkin’s Disease, prompting her to claim that testifying at the trial would be too traumatic for her. As a result, the charges were eventually dropped. Although the arrest made news within the local media, NAF continued to stand by Lehrer, and his facility website continued to state that he was a NAF member. 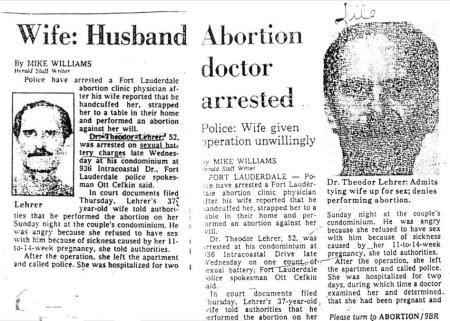 According to the Miami Herald and other media outlets, which reported the arrest at the time, Lehrer was angry when his wife refused to have sexual relations with him due to feeling ill from her 11- to 14-week pregnancy. Lehrer’s wife allegedly told authorities at that time that she was reading in the bedroom when her husband handcuffed her, dragged her into the bathroom, and strapped her to a portable table. Lehrer’s wife told police she pleaded with him not to rape her, so he placed a gauze pad over her mouth but removed it for fear she would suffocate. The victim stated that she then felt excruciating pain. A doctor at the hospital where she was admitted for two days later verified that she had been pregnant and had recently received an incomplete abortion. 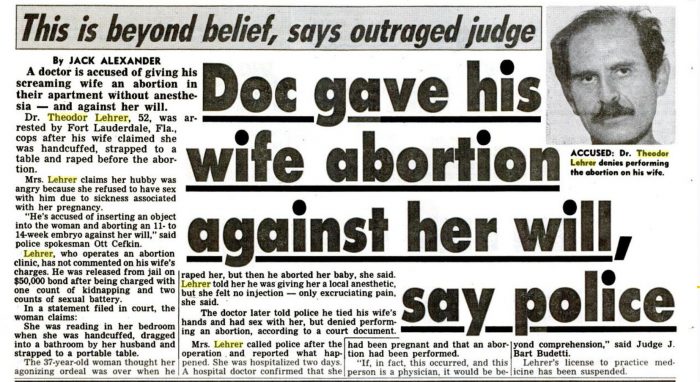 In 1989, the Florida Board of Medicine, while acknowledging that “probable cause was previously properly found,” ruled not to revoke Lehrer’s medical license after the victim’s physician told the board it was unlikely she would be able to testify for the trial or any additional proceedings. This made the probability of a successful prosecution of the abortionist unlikely. 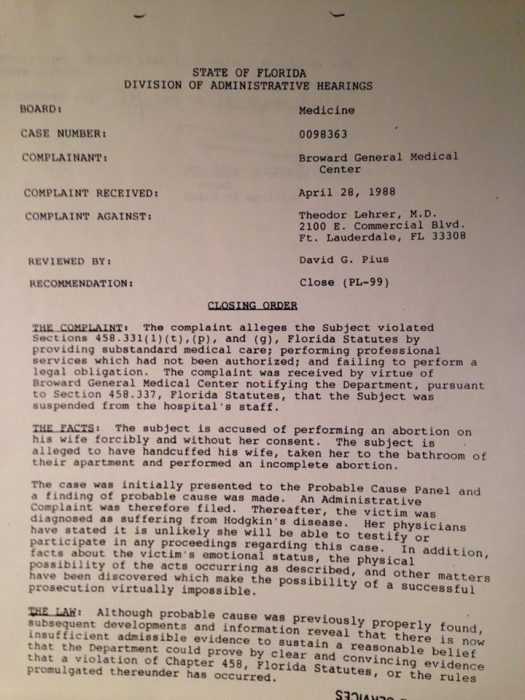 In 2018, authorities cited the facility for failing to report complications related to a serious botched abortion. The patient was transferred to the hospital after suffering a uterine perforation. In March of 2019, the 3,000 square foot building located at 2100 E. Commercial Blvd in Fort Lauderdale was put up for sale, and according to the website Loopnet.com, it is being sold for $1,149,999. 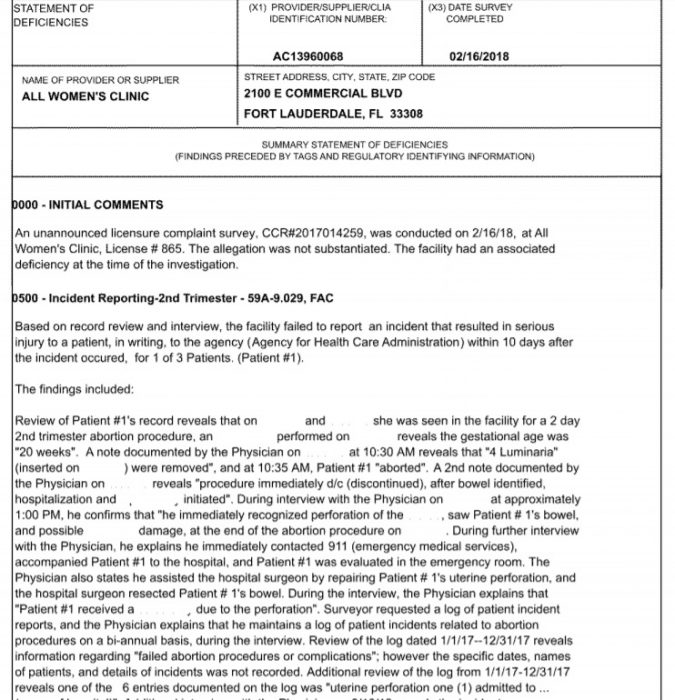 All Womens Clinic in Fort Lauderdale closed after botched abortion

In  a 1986 op-ed Lehrer penned in the South Florida Medical Review, the abortionist wrote:

A critical question is whether there is any point before birth at which fetal life attains a level of significance warranting legal protection because of the quality of humanness that out-balances a woman’s right to privacy over her own body.

As a pro-choice physician I acknowledge that the fetus is alive, but do not view it as a separate individual. Biologically the fetus is completely dependent on the woman’s body and as such is only a potential human being. The woman’s rights and life outweigh any alleged rights of the fetus because the birth and rearing of a child should be a happy and fulfilling experience. It should be something that the woman feels positive about and part of her choice for her life.

As is common among abortionists, Lehrer then points to eugenics, writing, “Unwanted children add to suffering for the woman, child, family and society. Something besides life is owed to children. Couldn’t it be considered immoral for parents – and even for countries – to produce more children than they can provide adequate food and education for?”

The abortionist ended the op-ed with the claim, “the voice of the people is God’s voice.”

Years of continued prayer and outreach outside abortion facilities are having an impact and those who regularly pray and reach out to women are to be commended for their refusal to give up.