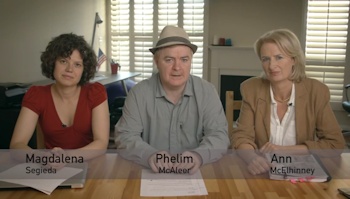 Drive west down Lancaster Avenue through Philadelphia’s “Main Line” and you’ll pass picturesque towns fit for movie backdrops. But turn east, and you’ll soon find yourself in front of a former house of horrors, the truth of which some want to censor from ever hitting the screen, big or small.

Abortionist Kermit Gosnell’s clinic no longer hears the cries of full-term, born-alive babies being brutally murdered or the silent screams of thousands of the unborn innocent, but one team of filmmakers wants to make sure America never forgets. Not surprisingly, the team is facing an uphill battle.

An independent filmmaker has set out to tell the story of “America’s biggest serial killer … and the media cover-up,” producing a drama that will be based both on Gosnell’s trial and on the grand jury report. The filmmakers – husband and wife Phelim McAleer and Ann McElhinney, along with Magdalena Segieda – are not new to tackling controversial topics. Their earlier credits include “FrackNation,” which dealt with hydraulic fracturing, and “Not Evil Just Wrong,” which addressed global warming.

So, the fact that they’ve set out to highlight the evil of the man who “killed more people than Gary Ridgeway, John Wayne Gacey, The Zodiac Killer and Ted Bundy combined” isn’t necessarily surprising.

But beyond exposing the gruesome practices that were routine in Gosnell’s clinic, McAleer’s film – titled “Gosnell: The Doctor Is Sin” – will also expose the deliberate attempt by the media to cover up the truth about Gosnell’s factory of death. Indeed, as Newsbusters.org reports,

The trial, in which witnesses described baby abortion survivors “swimming” in toilets “trying to get out,” attracted merely 12 – 15 reporters. Only after 56 days, multiple letters from members of the House of Representatives and a public outcry from conservative groups, did all three broadcast networks report on Gosnell.

You see, when McAleer and his team sought to finance the Gosnell film, they turned to the popular crowdfunding site Kickstarter.com, the same site they had used to finance FrackNation. Yet, as the Washington Examiner reports, when McAleer tried to use Kickstarter for the Gosnell film, the site tried to censor how the fundraising campaign would describe Gosnell, including “limit[ing] what details about the case could be put in the fundraising campaign.”

McAleer called the attempted censorship as “particularly odious and alarming” as it is “an attempt to censor factual descriptions of a serial killer’s actions.” He went on to say, “In justifying their censorship Kickstarter told us they ‘understand your convictions’ but that they ‘encourage and enforce a culture of respect and consideration’ and therefore they could not approve our project until we removed factual descriptions of Kermit Gosnell stabbing babies and ‘similar language.’”

In reality, it’s not that the truth is too gruesome; it’s simply that it’s too true. Indeed, the only truth you have to hide is the truth you’re afraid of. And apparently, Kickstarter is as afraid as the mainstream media of the horrific reality of the abortion industry. Unable to argue in light of that reality, they simply try to keep the reality in the dark.

Not dissuaded, McAleer and his team are pressing on and have turned to Indiegogo.com to raise support for the film. They’ve set an ambitious goal of $2.1 million, the sum of which must be raised within the next 42 days or Indiegogo returns all of the funds (“all or nothing” fundraising is not an unusual practice for crowdfunding sites).

In addition to requesting donations, the site is also asking people to share the link – www.gosnellmovie.com — in order to ask others to support the film.

As the campaign site notes, “We tell a lot about ourselves by the stories we choose to tell and the ones we want to cover up or ignore…. It’s a frightening testament to the power of the media that very few people even know about Kermit Gosnell: America’s Most Prolific Serial Killer.”

The babies slaughtered by Gosnell had their individual stories cut short and their collective story largely ignored. The Gosnell movie, along with the documentary series 3801 Lancaster Film Project, is making sure the truth of Gosnell’s house of horrors and the subsequent media cover up is no longer held hostage by those whose interests lies best serve.