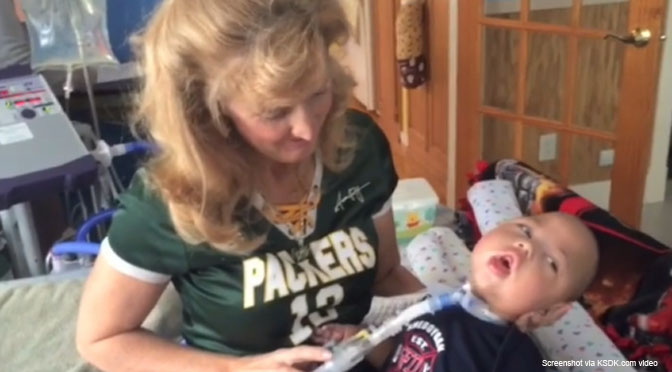 Cori Salchert and her husband Mark already had eight children when they decided to become foster parents. But the couple wouldn’t be fostering just any baby who was placed with them, they would be taking in the babies with life-shortening and terminal diagnoses.

Salchert’s compassion and love for children who suffer from terminal and life-threatening health conditions goes back to her own childhood, when she watched her young sister Amie struggle with spinal meningitis that left her with mental and physical disabilities. In an article for Today Parents, Salchert writes that Amie went to live in a children’s home for the severely impaired, but she wandered outside and drowned. Salchert imagined her sister dying alone, unable to breathe.

“Throughout my life, I struggled with the question, ‘Where was God when my sister needed Him most?’” she writes.

Salchert became a registered nurse and during her career she worked with hospice care patients, maternity patients and newborns. But on occasion, those worlds would collide when babies would die in the womb or only live for a short time after birth. Salchert wanted to help these families, so she began the Hope After Loss Organization in Sheboygan, Wisconsin, holding dying children so they wouldn’t be alone. From there, everything began to change.

In August of 2012, the first call to foster parent a child came. A two-week old baby girl, still without a name, needed a family. She was born without the right or left hemisphere, and doctors told the Salcherts that she would not live long.

“I was told she was in a vegetative state – unable to see or hear, and only responding to painful stimuli,” wrote Salchert.

They brought the baby girl home with them and named her Emmalynn. Emmalynn lived for 50 days in comfort and love.

“She could have died in the hospital, wrapped in a blanket and set to the side because she was being sustained with a feeding pump,” wrote Salchert. “But we brought this beautiful baby home to live, and live she did.”

Emmalynn went everywhere with the family, and with eight older siblings, she was never alone. Then one night, as Salchert cuddled Emmalynn and sang to her, the baby girl took her last breath. The family was heartbroken.

Soon, however, they took in Jayden, whose health improved and he was able to be adopted by a relative. The family said goodbye, and Salchert wondered if she could go through the emotions a third time.

At a family meeting, Salchert asked her husband and children if they were ready to foster another child. And her daughter, Mary Elizabeth responded:

Mom, what if some kid really needs us and you’re just sitting here with a broken heart.

One week later, Charlie came to live with the family. Charlie has Hypoxic Ischemic Brain Encephalopathy due to a lack of oxygen. He uses a tracheostomy, ventilator, and a feeding tube. At first, Salchert was terrified she would hurt him or that he would suffer if she made a mistake.

“But, God told me we’re going to kick this fear in the butt,” Salchert told the Sheyboygan Press. “It’s OK to be afraid, but never let fear cripple your life.”

Charlie was officially adopted on December 18. His sisters love to cuddle with him and they all take walks together, enjoying their time with Charlie while knowing that they may soon lose him.

Mark Salchert told the Sheyboygan Press that the family is able to endure these tough emotions thanks to their faith in God.

“God is love, and He loves this little boy, and He loves us to love him,” he said. “Charlie is truly an amazing individual; he’s made us richer – more alive, in a sense.”

The family has begun funeral arrangements for Charlie so that they are prepared when the time comes. They know that he will be free from his physical limitations when he leaves for Heaven, but they will be heartbroken once again when he does. Still, they are grateful for the chance to help and to love.

“… [T]hey need moms,” Salchert said of the children they have taken in. “Too many people never do anything because they can’t do everything and can’t save everyone. For me, even though I can’t help every child, I’m happy to make a difference in the lives of a few.”