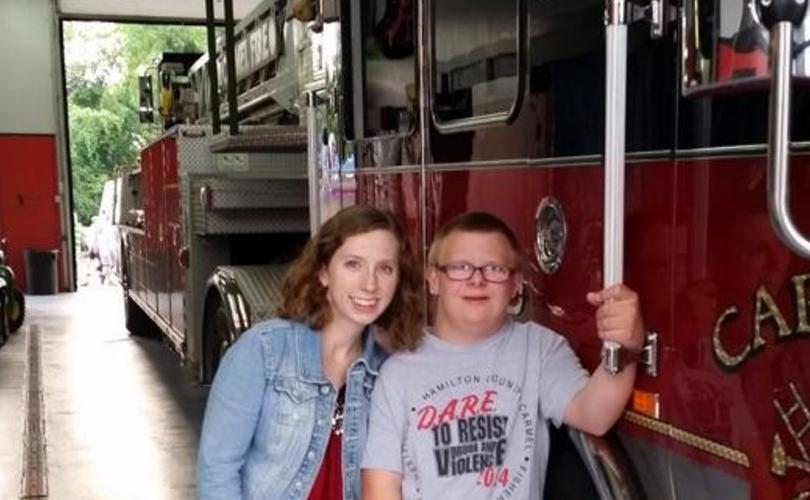 (LifeSiteNews) It was my sixth birthday, and I cried, chasing the ambulance taking my new baby brother and my mom off to a different hospital. He needed surgery for duodenal atresia, or blocked intestines, a condition present in about 2.5% of children with Down syndrome. The recovery took some time, but now Conrad has no trouble eating — something he loves to do!

As he grew physically, he also grew to become the favorite of the family — everyone’s favorite. It’s something I’ve noticed among other families, as also mentioned by Evita Duffy in her November 30 article in The Federalist — we all favor the sibling with Down syndrome, for a variety of sometimes overlapping reasons.

But mostly? Mostly they are the favorites because they are the most tolerant, loving people in our society. This is a generalization, but it’s generally true. And this in contrast to a recent article by Sarah Zhang at The Atlantic, who wrote about the high abortion rates of children prenatally diagnosed with Down syndrome in Denmark, and closed by arguing for tolerance toward the practice. In America, it’s well known that those who preach tolerance don’t practice it; they use it as a tool to control others. Zhang uses this argument to make the abortion of a certain group of people seem less horrific.

In reference to a young man with Down syndrome and the conversation regarding aborting children like him, the final line of her article reads, “[T]he stakes of our conversation were very real and very human.” That sentence evokes pity, as if to say that as long as you feel bad for making the decision, and feel for the people it affects, as long as you think you’ve tried to understand both sides of the issue, it’s OK to engage in eugenics. Nothing could be farther from the truth. And it hurts all of us.

Beyond the unborn victims of abortion, engaging in eugenics has a particularly harmful effect on women, who often bear the brunt of the decision and are essentially in an experiment yet undone on the long-term mental, emotional, and spiritual effects of this action. It creates an empathy gap, not only between the wealthy who can pay for testing and those who can’t, but also between the scientists who are pushing the boundaries and the actual lives of the people affected.

Zhang explains in detail the history of prenatal testing and recent advances in the field. But science is consistently behind in this area. It was behind in the days when children with many diagnoses were institutionalized, and it is behind now. While “advances” in prenatal testing are being used as an excuse to eliminate difficulty or uncertainty, individuals with Down syndrome are proving that the limitations placed on them by the medical profession and society as a whole are far from legitimate. And while we shouldn’t judge the value of someone’s life based on his accomplishments, that’s where many individuals with Down syndrome are in this fight — defending their lives and the lives of those like them, pointing to society’s upside-down value system and asking us to change. They’re teaching us. Take Chris Nikic, the young man who completed the Iron Man this year and inspires others to be 1% better every day. Or Grace Strobel, model, speaker, and activist. Or Troy Drake, an entrepreneur. Or the many individuals with Down syndrome who have testified before Congress, before communities, and in their school lunchrooms that their lives are worth living.

And they’ve changed communities. In my home town of Carmel, Indiana is a thriving community of people of differing abilities and their families who support each other. It’s an incredible group. People who grew up together, play sports together, go trick-or-treating, and live life together. Families bond as the entire community (of “abled” and “disabled” alike) come together, sharing the love of being human and accepting one another with all our differences.

That’s one part of the tragedy of eugenics in places like Denmark, Germany, and Iceland. While fear of the unknown, fear of the future, and mourning the loss of the life you thought you’d have are certainly valid and appropriate, let’s not miss the many benefits of welcoming a child with Down syndrome into the family. Those who choose to abort miss humanity in search of perfection or certainty, neither of which exists in this world. The parents who abort babies prenatally diagnosed with Down syndrome miss out not only on the humanity and the community, but also on themselves, on their own personal growth. They miss out on the process of becoming more selfless, caring more for others, and growing in maturity and strength. Because surely, embracing people for who they are, regardless of their perceived imperfections, is the highest form of empowerment and love.

It’s time we all learned that in the field of medicine, and in life, just because something can be done doesn’t mean it should. It’s time to step up and accept hard or unexpected things and the amazing beauty and blessing they bring. It’s time to love and live and give this Christmas season. And also to accept each other truly, not just in the name of tolerance. I’ll be doing all of this with my favorite brother, Conrad.

LifeSiteNews Editor’s Note: Gretta Weindorf, the author of this article, is a certified family nurse practitioner and older sister to Conrad, who has Down syndrome.

LAN Editor’s Note: This article was originally published at LifeSiteNews and is reprinted here with permission.