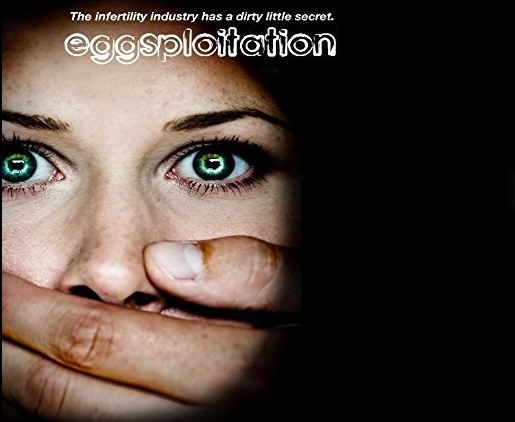 The fertility industry, by design, treats children as commodities and possessions to be created and destroyed at will. And a documentary, now streaming on Amazon Prime, reveals more about how the women who donate their eggs are treated, and the serious risks they endure. Eggsploitation (2010, updated and expanded version released in 2013) is a documentary short about some of the unheard victims of the $6.5 billion per year infertility industry. It follows the stories of several women from a variety of demographic backgrounds who chose to become egg donors for the promised financial and altruistic benefits, yet suffered terrible consequences. Stroke, ovarian torsion, unexpected cancer, and ultimately damage to or loss of their own fertility are some of the painful prices these women paid, despite not being adequately counseled on serious risks ahead of the procedure.

Produced on a $25,000 budget, the award-winning 45-minute independent film Eggsploitation is the first in a series of Jennifer Lahl’s exposés on the shady business of breeding in the laboratory. These include Anonymous Father’s Day (2011), Breeders: A Subclass of Women? (2014), and Eggsploitation: Maggie’s Story (2015, also streaming on Amazon Prime).

As the stories in Eggsploitation reveal, the venture can be eerily reminiscent of human trafficking, with women treated as commodities rather than respected as autonomous beings in a reasonable economic exchange.

With offers as high as $100,000 floating in advertisements, young women (usually targeted for their physical beauty and academic success — one woman in Eggsploitation had to take an IQ test) are easily baited into signing up for the initial procedure. When their ovaries don’t release as many eggs as preferred in the first cycle, they feel pressured to continue the risky operation or settle for less money and possibly disappoint their recipients.

Lahl, R.N. and founder and president of the Center for Bioethics and Culture Network (CBC), decided to create the documentary when she encountered many women hurt by the egg donating process. She takes a sympathetic approach to the subject, understanding the charitable intentions many young women have towards those who struggle to conceive. The ethics of egg donation, in vitro fertilization, and other infertility treatments are left to the viewers’ discernment. But when it comes to the ethics of treating patients, Eggsploitation makes it quite clear that there is a problem.

“If you are an organ donor and you donate your kidney, you will forever live in a database that will monitor you long term to find out how you do five, ten, twenty years later after you donate a kidney,” Lahl says in an interview with Women Now. “That’s not the case with egg donors,” whom she says are not even treated as patients because their importance becomes secondary to the woman pursuing a fertility remedy. “Because they’re not sick, we don’t even keep medical records on egg donors,” says Lahl.

“This whole industry of fertility medicine is relatively new,” Lahl, says in the aforementioned interview. “It’s only been around for about three decades, so we’re only now starting to see some of the negative longer term risks, and those are predominantly cancers.” These risks apply not only to women donating eggs, but to women who collect their own eggs for in vitro fertilization, and possibly to children conceived through these alternative methods.

The risks are due to tampering with the hormones that control a woman’s reproductive cycle. While a man normally produces millions of easily released sperm every day, a woman normally produces a single egg every month that is matured and released on a delicate hormonal schedule. Since this is commercially impractical, the egg donation procedure must hijack the menstrual cycle with hormonal injections that cause the woman to produce an abnormal amount of eggs (a range from 20 to 70) at once, which are then surgically removed.

Eggsploitation reports that the procedure begins by inducing temporary menopause in order to synch the egg donor’s cycle with that of the egg recipient. This is done by the woman self-injecting Lupron, a drug the FDA has not approved for fertility use. Next, the ovaries are prompted to super ovulate, which can lead to the dangerous ovarian hyperstimulation syndrome (OHSS). A final injection is given to release the mature eggs, which are afterward sucked out via a vaginal catheter under anesthesia.

Even though the featured women began experiencing extreme discomfort (the ovarian swelling alone is miserable) and some severe side effects, their symptoms were dismissed as “normal,” and their commitment to the donation kept them in denial.

But it’s not just the women who came forward in Eggsploitation who can testify to this. A quick Google search highlights a sisterhood of suffering egg donors. One Canadian blogger who documented her experience is disappointed in how the risks were downplayed at the outset, and cautions other women to do more thorough research.

“Are we fulfilling one woman’s dream at the expense of another woman’s health?” This is the question at the heart of Eggsploitation. While society may have grown past the ancient days of women using slaves as their surrogates, humanity’s baser instincts in the face of desperation to conceive have not necessarily become less barbaric.