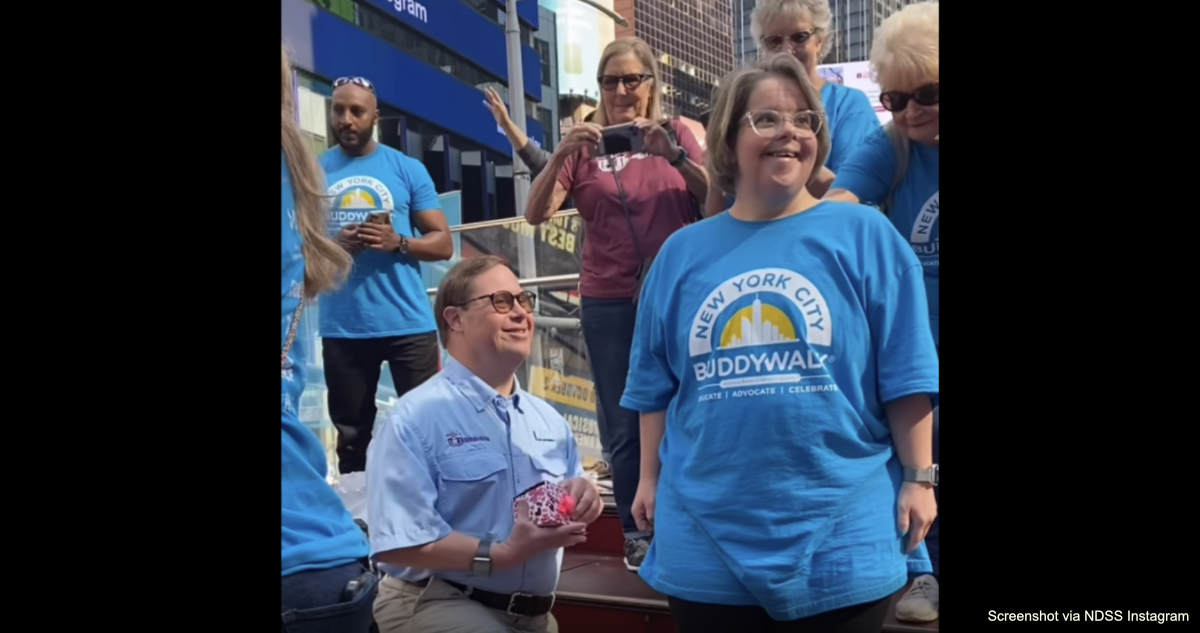 A woman who headed to Times Square for Down Syndrome Awareness Month had a sweet surprise when her boyfriend proposed to her. The proposal, which was caught on video, is just one instance showing that people with Down syndrome can lead rich, fulfilling lives, despite the dire predictions their parents are often given.

The heartwarming proposal was shared on social media by the National Down Syndrome Society; each October is a month dedicated to spreading awareness and education, as well as celebrating the abilities and accomplishments of people who have Down syndrome.

“Jenny thought she was having her picture taken in NYC,” the caption reads. “But in reality, her boyfriend Austin was getting ready to propose! Austin popped the question just after they had their photo shown on the jumbotron during our Times Square video presentation. We couldn’t be happier for them. And can’t wait for the big day!” 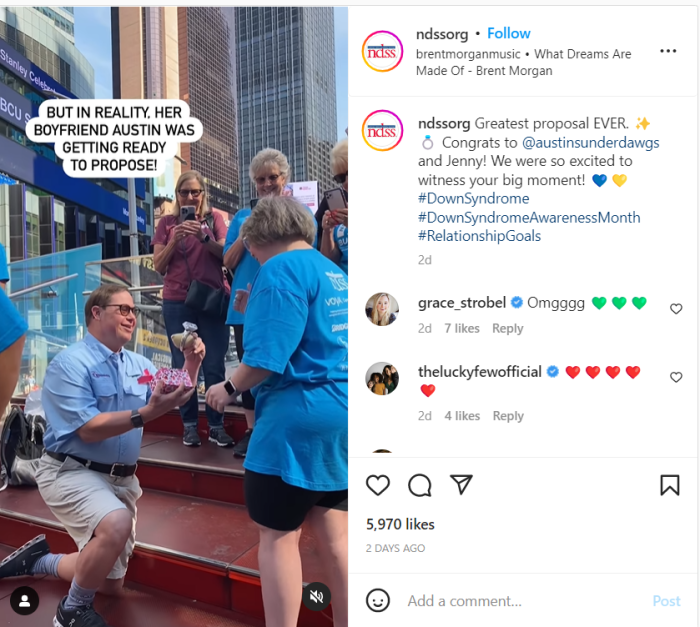 As the proposal shows, people with Down syndrome aren’t limited in what they’re able to do; they have achieved many things, including graduating from school, holding down jobs, and getting married. In fact, the young man in the Instagram video, Austin, is an entrepreneur with his own food truck selling specialty hot dogs. He was featured in a recent Fox & Friends video, where he introduced his girlfriend to host Rachel Campos-Duffy.

“Tell me a little bit about what you love about her,” Campos-Duffy asked Austin.

“She makes my heart really nice,” he said. “And she’s the one for me.”

Despite the many accomplishments people with Down syndrome are able to achieve, preborn children with the condition continue to be a target for discriminatory abortions. One study found that as many as 67% of pregnancies in the United States end in abortion after receiving a prenatal diagnosis. For those parents who do continue with the pregnancy, just 11% of women reported having a positive experience. Shockingly, the country of Iceland claims to have “eradicated” Down syndrome, when in reality, nearly 100% of children with the diagnosis were aborted.

Down Syndrome Awareness Month aims to show that people with the diagnosis can lead joy-filled, fulfilling lives, but it also sends a bigger message — that all lives should be cherished and protected, no matter what the ability or diagnosis.