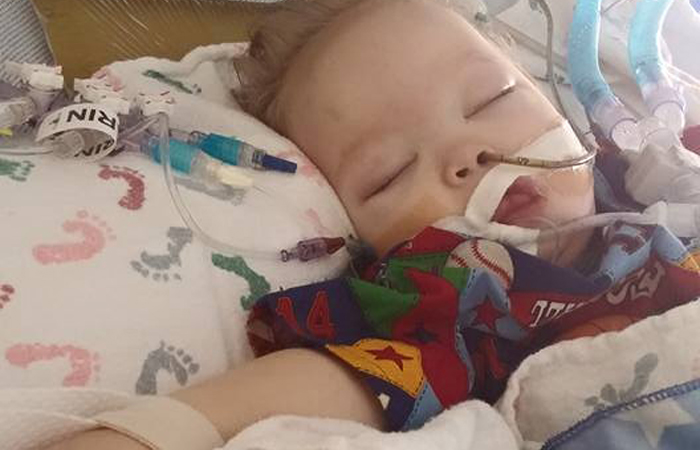 Easton after his transplant.

Before little Easton was born, doctors told his parents, Danielle Orris and Brenden DeJong, that he would die.

During an ultrasound, they were unable to see a bladder or kidneys on baby Easton.

The doctor told his parents that Easton would likely die in the womb. They were devastated, especially when he suggested abortion.

At 33 weeks gestation, Orris went into labor, and no one knew if her son would be born alive. She was terrified, but despite the doctor’s predictions, Easton was born via C-section.

After six weeks in the Neonatal Intensive Care Unit, he went home with specific care instructions. There were medications and a rigorous eating schedule, as well as weekly lab work and a colostomy bag. Two to four times a week, Easton would go to Nebraska Medicine for dialysis.

On May 18, Easton had his 18th surgery: a kidney transplant. And his father was the donor. Easton and his father after their surgeries.

The surgery went well, and Easton didn’t have any complications. In addition to giving Easton his father’s kidney, doctors removed the very small bladder he had. Easton will continue to use a urostomy bag which he was given around age one. He also has a small catheter that will be used for his frequent blood draws. Now, about to turn two, Easton has a new life ahead of him.

By June 1, Easton was getting back to his usual happy self. And on June 4, just over 2 weeks after his transplant, Easton was moved out of the Pediatric Intensive Care Unit to a regular hospital room.

“The past few weeks have been a scary rollercoaster,” explained Orris. “For 2 weeks he was on the breathing tube and that was scary. It hurt so bad not being able to hold him or make things better. But his kidney so far is doing great! He hasn’t had dialysis in 3 weeks and that’s been amazing! He waves and smiles at every nurse and doctor that comes in his room and he loves helping give his medicines and help them out his blood pressure cuff on. He is so very happy and that helps make this hospital stay so much easier.” Easton and his mom getting some rest.

As he continues to heal, doctors are working on stabilizing Easton’s blood pressure and balancing his immunosuppression medication. His parents hope to bring him over within the next week.

“We know that Easton will always be a complex boy and have things that others will not and we are more than okay with that,” said Orris on Facebook. “He wouldn’t be our sweet boy if he didn’t have these other things. […] He is perfect just the way he is and we will always make sure he knows that.”