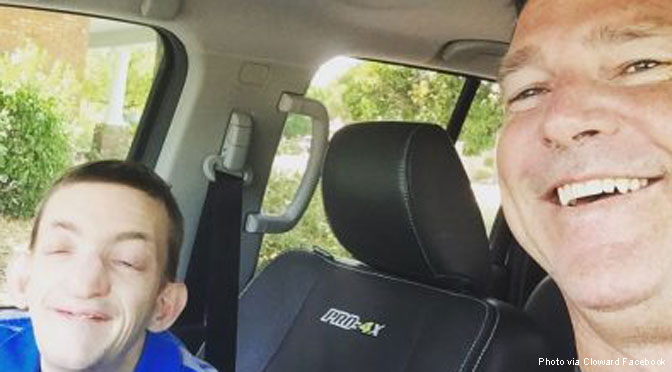 Dallan Cloward was born with a rare chromosomal disorder called Wolf-Hirschhorn syndrome, which affects facial appearance, growth and development, and intellectual disabilities. Doctors told his parents that he likely wouldn’t live beyond the age of two. However, on August 12, Dallan will celebrate his 30th birthday, and his father wanted to make it special. He planned what he calls “30 for 30” in which they will do 30 activities over 6 weeks to celebrate Dallan’s 30 years of life. Dallan and Chad on a roller coaster. Photo via Facebook.

According to the local NBC News of Arizona, doctors told Dallan’s parents that their son would have no ability to learn and would likely live in a “vegetable state”.  But Dallan proved them wrong. He did so well with his seizures, doctor visits, and medications that he earned the nickname “The Battler.” And he earned his high school diploma at age 21.

“I still so remember thinking, ‘I can’t get too attached because it will hurt more when we lose him,’” Chad Cloward, Dallan’s father, told KPNX. “Then after a day or two of thinking that — it hit me — that if I don’t give him every ounce of love I can, I will regret that for my entire life once he passes.” Dallan and Chad enjoying a meal. Photo via Facebook.

So far, the father and son duo has celebrated Dallan’s 30th by doing everything from hiking in the Grand Canyon to riding an adaptive bike and taking a ride on a roller coaster to cruising on a four wheeler. In the videos and photos Chad has shared to Facebook you can see the pure joy and love on the faces of both father and son. Chad says he “loves watching Dallan continue to defy the odds.”

“He never thinks of the past and doesn’t worry about tomorrow; he enjoys the moment,” Chad said.